Following is the November 2022 installment of “ISIS Redux: The Central Syria Insurgency,” a monthly chronicle of attacks by the terrorist group ISIS in central Syria. A review of developments throughout 2021 can be found here, and previous editions in 2022 can be viewed through the following links: January, February, March, April, May, June, July, August, September, and October. A full background and analysis of ISIS’s resurgence in Syria, including the methodology used to collect this data, can also be explored here, here, and here.

ISIS militants carried out at least nine confirmed attacks in November in the Raqqa, Hama, and Homs governorates. These attacks killed at least four pro-Assad regime soldiers and wounded 10, as well as two civilians. Additionally, there were two high quality* attacks in November. There were fewer attacks, high quality attacks, and deaths compared to September and October. Like October, confirmed activity in November was concentrated in Homs, rather than in the southwest Raqqa region where ISIS activity in September and August was focused. (It is worth noting that all but three of the confirmed southwest Raqqa attacks since August have come via ISIS claims. ISIS made no official Badia claims in November, so this perceived change in activity may only reflect a change in ISIS media strategy, rather than a drop in actual attacks.)

While ISIS cells in Deir Ez Zor, and possibly Raqqa, appear to have decreased their activity in November, the cells in northeast Homs continued a serious campaign against regime forces around the key village of Kawm this month. In October, ISIS cells reportedly routed regime forces from the eastern Kawm sector—the mountainous region between Jabal Bishri and Kawm. Then, over a three-day period at the end of November, ISIS cells first cut off the northern approach to the town and then, on November 30, forced a complete withdrawal of pro-regime forces (which included members of the Russian Wagner Group). This is the first time ISIS has seized the town from the regime since briefly doing so in April 2021 and comes one month after the regime launched its first major anti-ISIS operations of 2022.

ISIS attacks remained steady in Homs (6) following a three-month summer lull,, continued their precipitous decline in Deir Ez Zor (0) following a spike in September, and in Raqqa (1) after two months of elevated activity during August and September. Confirmed ISIS activity remained steady in east Hama (2), consisting of Improvised Explosive Devices (IED) and mines as has become the norm.

ISIS has not claimed an attack in southern Raqqa since its October 30 announcement of a small arms attack on a regime barracks near Tabqa airbase. On November 17, however, pro-regime media reported an ISIS ambush on the vehicle of a regime lieutenant colonel traveling near Shuwayhan, just north of Resafa and 10 miles east of Tabqa airbase. The attack left the officer “severely wounded,” and killed two and wounded four in his escort.

As in October, there were two reported incidents in eastern Hama in November that could be attributed to ISIS. Both incidents involved mines or IEDs and therefore, it is unknown if the devices were recently placed or are only now being discovered. The first occurred on November 19 when two civilians were wounded after they drove over a mine east of Rahjan. The second incident occurred on November 21 when three local militia men were wounded by a mine while driving in the countryside near Sa’an. Both of these areas have witnessed periodic mine explosions for years and were the sites of heavy clashes when ISIS cells first infiltrated the region in 2020. 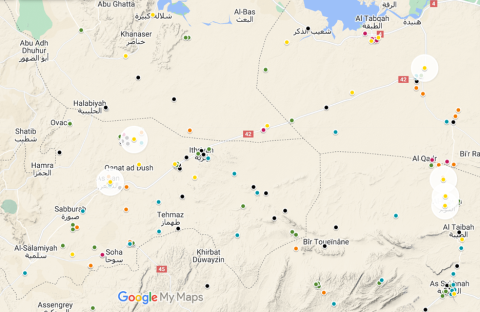 Map of ISIS attacks in southern Aleppo, south Raqqa and east Hama in 2021 and 2022. November 2022 attacks are highlighted (yellow pins).

There were no confirmed attacks in Deir Ez Zor in November.

As with October, Homs experienced the greatest number of ISIS attacks in November. The most serious of these occurred around the village Kawm. Kawm is the only major urban area along the highway connecting Sukhnah to Resafa – i.e., the highway connecting the two main Badia highways—the Palmyra-Deir Ez Zor highway and the Salamiya-Raqqa highway. The Kawm region also has several oil and gas fields the regime and Russian forces have brought back online since retaking the Badia from ISIS in 2017. This area saw intense fighting in 2020 when ISIS activity surged across the Badia, and was for much of that year considered either no-man’s-land or in ISIS control. The major regime operation at the start of 2021 heavily emphasized securing Kawm, with 4th Division reinforcements deploying to support local National Defense Forces (NDF) and Liwa al-Quds fighters, all backed by the Wagner Group and Syrian air support. By May 2021, these forces had managed to create a security cordon around the town and set up outposts across the countryside. After a few failed attacks in the following months ISIS appeared to have largely left the sector alone, instead focusing its efforts further north in the Kadir area along the Homs-Raqqa administrative border. Fighting was concentrated therein the first nine months of 2022.

However, in early September a group of ISIS fighters ambushed regime forces north of Kawm, near the Kadir Oil Field, and on October 3 serious fighting broke out east of Kawm between ISIS cells and regime militiamen from Liwa al-Quds and the local NDF. Security forces were forced to abandon their outlying positions despite the use of regime warplanes. On November 28, ISIS cells were able to cut the northern approach to Kawm, forcing security forces, which included Wagner members, back to the town. On November 30, pro-regime sources reported that security forces were forced to completely withdraw from Kawm for the first time since April 2021. On the same day ISIS pushed security forces out of Kawm, another cell launched an attack on regime forces stationed in the village of Kadir to the north.

At least three other attacks occurred elsewhere in Homs in November. On November 2, pro-regime pages reported that army units “repelled” an ISIS attack near the Tanf region with “only one wounded soldier.” This attack likely occurred near the Iraq border. On November 13, two soldiers were killed on the Homs-Palmyra highway. On November 22 a soldier was wounded by a mine in the Palmyra countryside. 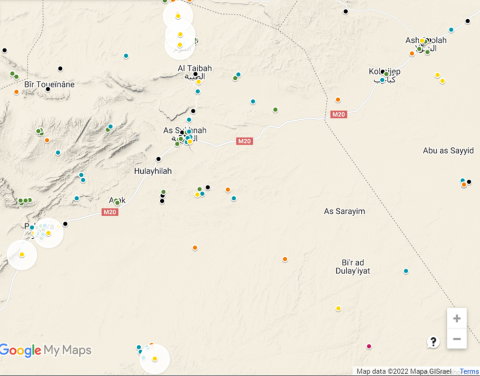 A Brief Look at ISIS Cells

On November 30, ISIS announced the death of its leader, Abu Hasan al-Hashimi al-Qurashi. Following the announcement, which U.S. CENTCOM released a statement claiming the man was killed by ex-rebels in Dara’a in mid-October. In announcing its leader’s death, ISIS named a new caliph and ISIS groups from across the world have since released photosets of their fighters pledging allegiance to the new leader. Several such photos showing ISIS cells across Syria were published on December 2. Among them were photos of Badia-based fighters which appear to show numerous children and teenagers, something which has not been seen in photosets of armed Badia cells before. This author has frequently written about ISIS’s use of the Badia for training camps for children it recruits or kidnaps, primarily in northeast Syria. These photos would appear to confirm this, revealing the newest generation of ISIS recruits which have recently begun to be integrated into active cells. 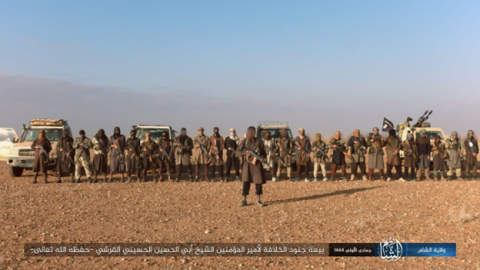 A group of ISIS fighters in the Badia with numerous apparent children and teenagers.

Despite the rise in quantity and complexity of ISIS attacks in recent months, the continued lack of consistency in complex attacks compared with 2020 suggests that either ISIS does not have a large number of active fighters in central Syria or does not feel confident enough in its ability to maintain a high tempo without taking significant losses. However, the recent series of battles around southern Raqqa and Kawm mark a serious, continued emphasis by ISIS cells on securing and expanding its area of operations along the southern Raqqa front. These actions show that despite whatever resource constraint the group is currently facing, it is still able to concentrate resources on at least two fronts it views as strategically important.

The killing of the ISIS caliph in mid-October in Dara’a and the subsequent revelation that he spent at least the last few months in southern Syria suggest that the central Syrian insurgency is able to escalate and make strategic decisions absent any direct oversight from the ISIS central command. These Badia cells are likely more tied into sub-regional command structures stretching between northeast and central Syria, with senior leaders coordinating on resource and troop movement with sectors in Iraq.

The apparent teenagers in the photos released of ISIS cells across Syria should serve as a stark reminder that the al-Hol prison camp is not the only “ticking time bomb” in terms of future ISIS members. The Syrian regime and its allies have done a decent job of securing critical infrastructure across central Syria over the past two years, but their forces have proven incapable of destroying the large ISIS camps that the group has used for years to rebuild and refit. It is these camps that enable ISIS to train the next generation of fighters and prepare for future surges across the country. 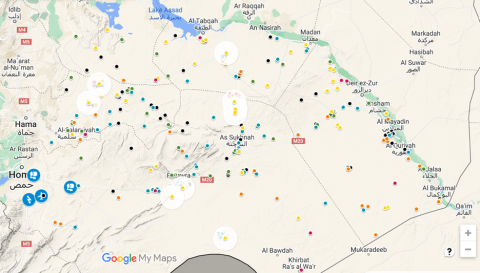 Map of locatable ISIS attacks (yellow pins) in November 2022 alongside attacks in 2022 and 2021. To view an interactive version of this map, please click here.