Following is the August 2022 installment of “ISIS Redux: The Central Syria Insurgency,” a monthly chronicle of attacks by the terrorist group ISIS in central Syria. A review of developments throughout 2021 can be found here, and previous editions in 2022 can be viewed through the following links: January, February, March, April, May, June, and July. A full background and analysis of ISIS’s resurgence in Syria, including the methodology used to collect this data, can also be explored here, here, and here.

ISIS militants carried out at least seven confirmed attacks in August in the Raqqa, Aleppo, Homs and Deir Ez Zor governorates. These attacks killed at least nine pro-Assad regime soldiers and wounded 11 more. There was one high quality* attack in August. August attacks climbed back to the spring average following an unprecedently quiet July. Interestingly, August’s activity was concentrated in the southwest Raqqa region, an area that has not witnessed much violent activity for many months. It is worth noting, however, that regime forces began new sweeping missions here in July following recurring reports of suspected ISIS movement in the desert plains in the south of the governorate. ISIS also claimed three attacks in southern Raqqa in August—the first attacks claimed in the Badia since June 2022, and only the second, third, and fourth claims made here since November 2021. These media announcements come on the heels of July’s rare three-page editorial in the group’s weekly Naba magazine detailing the activity of ISIS cells in central Syria.

ISIS attacks in southern Raqqa (4) and Aleppo (1) both rose, following a four month lull in which only one attack was conducted in Raqqa. Attacks in Homs (1), Deir Ez Zor (1), and east Hama (0) were consistent compared with July. Comparatively,  ISIS claimed 18 attacks in northeast Syria in August, roughly consistent with July, and 38 attacks in Iraq, an increase from July. It should be noted that these are only attacks claimed by ISIS, and in northeast Syria at least, ISIS conducts additional, unclaimed violent activity, expecially in eastern Deir Ez Zor.

Three of the four confirmed attacks in Raqqa were reported only by ISIS—that is, there was no public regime media acknowledging the attacks. This should not necessarily come as a surprise, however, as attack reporting from Raqqa is very difficult to pin down. The first claim was of a small arms ambush west of Tabqa in which ISIS claims it killed four soldiers in a vehicle. The second claim was of a mine planted on the road leading to the Tabqa Air Base—used by Russian air assets supporting regime anti-ISIS operations—which allegedly killed one soldier. The third attack was reported by pro-regime media. On August 21, local Facebook pages reported that five soldiers were wounded by a mine near the village of Kadir, in southern Raqqa. Kadir village sits on the southern edge of the large Kadir Oil field, between Resafa and Kawm, Homs. Small arms ambushes occurred in this area in both March and April of this year. The last attack was claimed by ISIS on August 28 and again involved a mine along the Tabqa Air Base road, allegedly killing two soldiers.

Pro-regime media reported a mine attack in southern Aleppo on August 23, the first confirmed attack in the governorate since March 2022. The mine reportedly wounded two soldiers at the “Zakia point,” an outpost along the Ithriya-Tabqa highway that sits on the southern edge of the Ithriya Oil Field. ISIS captured several checkpoints here in September 2020, and engaged in small arms clashes with regime forces in this area in December 2020, January 2021, and October 2021.

There were no reported attacks or mine incidents in east Hama for the second month in a row. 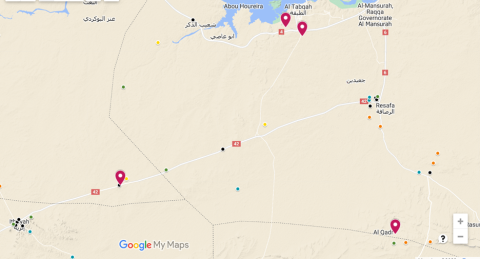 Map of ISIS attacks in southwest Raqqa and south Aleppo in 2021 and 2022. August 2022 attacks are marked by the red pins.

On August 7, pro-regime media announced the death of a soldier somewhere in the Deir Ez Zor governorate.

Pro-regime media also reported a mine attack on regime forces near the Uwayrid Dam in southeast Homs on August 19, killing one and wounding four soldiers. This remote dam sits close to the Iraq border and the US-controlled Tanf Zone. In 2018, it was the site of several large ISIS ambushes against regime forces.

Several interesting ISIS attacks in central Syria took place in August, highly reminiscent of the type of activity seen in 2020. While ISIS only carried out seven confirmed attacks, the choice of targets may represent a shift in strategy or the start of a new low-simmering campaign. At least five of the attacks targeted regime infrastructure: The two mines in Kadir and Zakia targeted forces operating around the respective oil fields, while the mines and ambush claimed by ISIS near Tabqa targeted forces moving to and from the air base. The Tabqa Air Base has proven critical for regime forces operating against ISIS since 2021, with Russian helicopters frequently deployed there providing air support for both convoys and patrols.

The Uwayrid Dam mine attack is also interesting. It is not clear to this author if the regime maintains a permanent presence in this area, or if the targeted soldiers were conducting new patrols. The region is quite remote and its proximity to the Anbar desert in Iraq and the vast southern Homs desert has likely made it a key spot in recent years where ISIS cells can move between the two countries and run training camps.

It remains to be seen if both this level and type of activity is maintained in September. There have already been several months in 2022 when spikes in ISIS activity were followed by steep declines. Furthermore, three of the seven confirmed attacks were only able to be documented due to ISIS claiming them. This should again serve as a reminder that ISIS largely controls our (lack of) understanding of the central Syria insurgency. The lack of reporting by pro-regime media from the region—and a complete absence of reliable opposition media—means that if ISIS does not publicize their attacks, then they will likely go unknown to analysts and outside observers.

Map of locatable ISIS attacks (highlighted pins) in August 2022. Not pictured is one attack that occurred somewhere in Deir Ez Zor. To view an interactive version of this map, please click here.