Following is the January 2022 installment of “ISIS Redux: The Central Syria Insurgency,” a monthly chronicle of attacks by the terrorist group ISIS in central Syria. A review of developments throughout 2021 can be found here, and a full background and analysis of ISIS’s resurgence in Syria, including the methodology used to collect this data, can also be explored here, here, and here.

ISIS militants carried out at least 18 confirmed attacks in January, killing at least 16 pro-Assad regime fighters and three civilians, while wounding at least 28 others in the Homs, Deir Ez Zor, Raqqa, and Hama governorates. ISIS activity in January was the highest since September due to an uptick in attacks in the countryside and urban centers of Deir Ez Zor. This spike was concurrent with a large surge in attacks across northeast Syria in January as well. ISIS carried out three high quality* attacks in central Syria and exhibited a significantly more aggressive posture than in recent months. Attacks continued to be very limited, however, in Hama, Raqqa, and Homs.

There were only five confirmed IED or mine attacks in the Badia in January, and one attack via unknown means. Two-thirds of the attacks were conducted using small arms, a significant increase in aggressiveness compared to ISIS’s preferred attack methods in the second half of 2021. Nearly all of these small arms attacks occurred in Deir Ez Zor and Raqqa, while passive mines were used in the only two attacks in Hama. Of the small arms attacks, at least two involved ambushes in the urban belt along the Euphrates river and one saw ISIS fighters ambush a small regime military convoy on a highway in southeast Homs.

ISIS activity was the highest in a year in Deir Ez Zor (11) and rose slightly in Homs (3), after both governorates saw a drop in attacks in December 2021. Activity in Hama (2) and Raqqa (2) remained very low while the southern Aleppo countryside remained quiet for the third month in a row.

There were three attacks in east Homs this month, the second fewest since March 2020. Two of the attacks involved aggressive small arms raids on regime forces. On January 2, ISIS militants ambushed a small military convoy in southeast Homs, destroying a bus and killing six soldiers and wounding 20 more. The convoy consisted of only four vehicles, a rarity since last year. The larger convoys the regime adopted in early 2021 have all but ended ISIS’s attacks on major highways. This attack thus suggests that cells are still monitoring the roads in the hope of finding easier targets. While initial reports indicated the use of “rockets”, the attack consisted only of ISIS fighters firing on the bus with small arms.

On January 19, a mine south of Tiyas killed one civilian and wounded another. This area, which marks the border of the remote Badia and the string of villages extending east from Homs city, has seen only rare attacks over the past year and half. However, recent reports from local security forces suggest that one or more ISIS cells long-positioned here are now trying to infiltrate further west, likely attempting to link up with sympathetic locals in order to create a foothold on the edge of Homs city. This mine attack may indicate that this cell, or cells, are now actively mining the area as part of the strategy.

Lastly, on January 27 ISIS militants attempted a night-time raid on a Liwa al-Quds position near al-Kadir, on the Homs-Raqqa border north of the Kawm Oasis. Regime forces seized Kawm and the surrounding countryside in the spring of 2021, and attacks in this area have been extremely rare in the second half of last year. This attack may have been a one-off event, or an indication that cells are attempting to re-establish themselves along this important transit route. 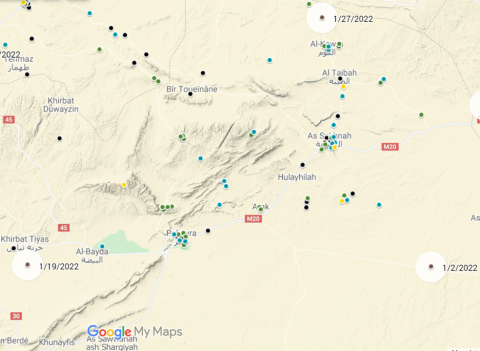 While ISIS activity in Deir Ez Zor in the last months of 2021 was focused in the northwest of the province, January saw cells engage regularly with regime forces farther south along the Mayadeen countryside. This region was highly active in 2020 and was one of the security priorities for the regime and Iran in early 2021. The return of semi-consistent ISIS activity here suggests that cells from Iraq or other parts of the Badia have moved in recently, or that the cells operating here in 2020 and early 2021 had simply gone to ground until now.

The most significant attack occurred on January 12, when ISIS fighters used the cover of heavy fog to infiltrate the town of Kashmah, just south of Mayadeen, attacking two regime checkpoints and raiding a small warehouse. The militants killed four security forces and stole a truck, food and medical supplies. Early the next morning, an ISIS cell ambushed a pro-regime National Defense Forces (NDF) vehicle on the road south of the town, destroying it with a rocket-propelled grenade (RPG), killing three regime fighters and wounding six others. Two weeks later, on January 28, ISIS militants attacked a regime checkpoint in the town of Zabari, seven miles north of Mayadeen. The attack left one solider dead and one wounded.

These three attacks marked the first time ISIS carried out small arms attacks in the urban belt stretching from Boukamal to Deir Ez Zor city since 2020. The attacks came just a month after reports of possible ISIS infiltration into the ranks of local NDF forces via the reconciliation process that began in November 2021.

Low-level clashes continued in the Mayadeen countryside through most of January, with skirmishes reported on January 14 and two attacks on patrols in the desert occurring between January 21 and January 23. Farther west, ISIS cells operating out of the Faydat bin Muwaynah region—a long-time ISIS stronghold in the desert—destroyed a Syrian army vehicle with an IED on January 20 and repeatedly skirmished with Syrian Arab Army (SAA) forces between January 21 and 23. In Deir Ez Zor’s northwest, ISIS cells destroyed an army water truck with a mine on the southwest edge of Jabal Bishri on January 17 and clashed with Iranian-backed forces west of Shoula on January 22. 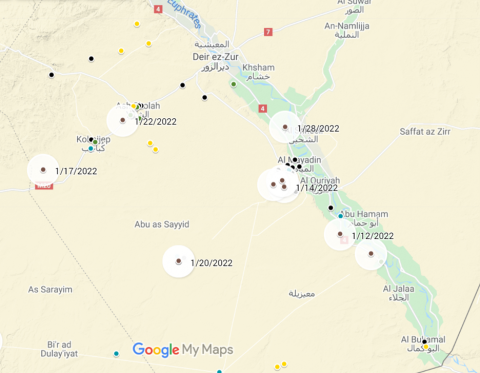 There were no attacks in Homs, Raqqa, and Aleppo in November 2021, the first time this has occurred since August 2019. However, limited ISIS activity returned to both Hama and southern Raqqa in December 2021 and January 2022.

Unlike December’s attacks that largely targeted civilians, the two attacks in Raqqa in January both targeted regime security forces. On January 5, ISIS militants fired on a vehicle carrying NDF fighters near Resafa, wounding some of them. On January 23, militants clashed with security forces near gas fields south of Resafa. This second attack was then exaggerated by pro-opposition media outlets, including SOHR, which claimed either that ISIS had captured Resafa or that the regime had withdrawn from several key areas around Resafa. This author spoke with two contacts in different regime units who were in contact with soldiers deployed in Resafa, all of whom denied these rumors.

The two attacks in eastern Hama, both using mines, hit civilians, as has become custom. The first mine, on January 3, killed a 17-year-old shepherd near Sheikh Hilal. The second mine, on January 13, wounded a child outside his village near Uqayribat. These mines, which were likely laid in recent months, are intended to limit civilian travel in the countryside in order to better protect ISIS cells that may be hiding there. However, it is still unclear if there are currently active ISIS cells in east Hama.

There continue to be no major anti-ISIS operations in central Syria. Various pro-regime forces have continued general patrols, de-mining operations, and training in eastern Hama while other forces, including from the Russian Wagner Private Military Contractor, continue patrols north of Palmyra. The spate of ISIS attacks around Mayadeen appear to have triggered increased sweeping operations in the Mayadeen countryside, although it remains to be seen whether this turns into a major operation.

While January’s attacks were still a far cry from the quantity and quality of ISIS activity witnessed in the second half of 2020, they do hint at some potentially worrying changes in central Syria. The three attacks within the heavily urbanized Euphrates River belt in Deir Ez Zor follow a slow return of activity to Deir Ez Zor after a sharp drop off in the first half of 2021. The fact that ISIS cells were confident enough and able to infiltrate the towns despite the increased number of pro-regime security forces in the governorate and general decline in ISIS operational freedom may indicate that new cells have entered the governorate or that existing cells have improved their intelligence networks. Alternatively, these attacks may have been borne out of desperation from cells that have been unable to resupply for months now due to a lack of civilian trade in the Badia and their inability to raid regime positions like they could in 2020. If this is the case, we may see cells acting more boldly simply out of necessity.

Furthermore, the single mine attack south of Tiyas in Homs may portend a gradual increase in activity from the cell(s) that have long been based in this area but until now have remained quiet. Local Syrian intelligence is convinced this cell or cells is now attempting to expand westward towards the Mheen countryside. It may be that the ISIS fighters here have begun laying new mine fields to protect their flanks. This is a common tactic the group has used elsewhere in the Badia. Assuming this Syrian intelligence assessment is true, the cell or cells are likely looking for ways to establish a gateway to attack the numerous powerplants and refineries southeast of Homs city.

If the increase in ISIS activity this month is indeed indicative of a more long-term planned increase in attacks, then this strategy will no doubt benefit from January’s prison break in Hasakah. While the escaped prisoners, which likely number in the hundreds, will likely wait in safehouses across the northeast until the ramped-up security pressure dies down, there is little doubt that they intend to eventually disperse between the northeast, the Badia, and Iraq. This potential influx of fighters, and with them needed supplies, would empower ISIS cells in central Syria to step up attacks against regime targets, particularly its oil and gas infrastructure. 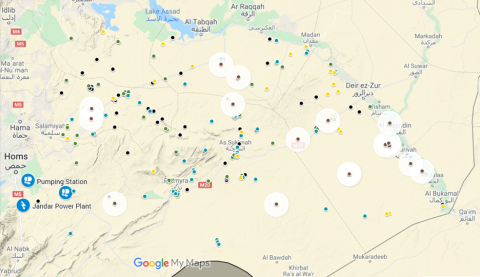 Map of locatable ISIS attacks (highlighted dots) in January 2022. This map does not include one attack in Deir Ez Zor which did not have a specific location attributed to it. To view an interactive version of this map, please click here.