Following is the April 2022 installment of “ISIS Redux: The Central Syria Insurgency,” a monthly chronicle of attacks by the terrorist group ISIS in central Syria. A review of developments throughout 2021 can be found here, and a full background and analysis of ISIS’s resurgence in Syria, including the methodology used to collect this data, can also be explored here, here, and here.

ISIS militants carried out at least six confirmed attacks in April in the Homs, Deir Ez Zor, and Hama governorates. These attacks in total left at least six pro-Assad regime fighters and one civilian dead and at least two others wounded. ISIS activity decreased significantly in April compared to March, matching the historic low points that occurred in January and July 2019. This decrease in activity came despite no changes in the Syrian regime’s security posture or any significant anti-ISIS operations. It is unclear why April was so quiet, but it appears to be a result of ISIS’s own strategic decisions, rather than something imposed on the group by regime security pressure.

There was no confirmed ISIS activity in Raqqa or Aleppo in April, the first time both governorates have been quiet in the same month since November 2020. High quality* attacks also dropped significantly in April, with ISIS conducting only two such attacks: one in Hama and one in Homs. Other than one death reported in Deir Ez Zor on April 1, there was no confirmed ISIS activity in central Syria until April 13.

At least half of ISIS’s six attacks in April used mines or IEDs, with only two confirmed small-arms attacks. This increased reliance on remote attacks represents a reversal from the more aggressive nature of March’s insurgency, when more than half of ISIS’s attacks involved small arms.

ISIS activity remained the same in Hama (2), decreased in Deir Ez Zor (2) and Homs (2), and was non-existent in Aleppo and south Raqqa. As is currently the norm, both incidents in east Hama involved mines, and it is unclear how recently these mines were placed.

There were only two confirmed ISIS attacks in Homs in April. The first occurred on April 13, when an oil well worker was killed by a mine or IED in the Bayarat area just west of Palmyra. ISIS cells have targeted civilians and local security in this area in the past using mines and IEDs, though most of this activity occurred in 2020. The April 13 attack is likely from a more recently placed mine, potentially placed on one of the service roads leading to the nearby oil fields.

The second Homs attack occurred on April 25, when an ISIS cell attacked the base of a unit belonging to the Syrian army’s 18th Division in the village of al-Khuwayliyah, on the road connecting Taybeh to the M20 highway. According to local security forces, ISIS managed to raid the petrol station and steal army uniforms and flags. These materials are key for ISIS fake checkpoints, used extensively during the height of the group’s insurgency in 2020. This is the first known ISIS attack in this area in 2022, and it was the most significant attack in the Badia in April.

ISIS activity in regime-held Deir Ez Zor continues to fluctuate in 2022. After a moderate increase in activity in March, only two attacks were confirmed in April. On April 1, a soldier was reported killed somewhere in the governorate—likely during intermittent clashes near Akash Oil Field that had been occurring since March 30. On April 25, a second soldier was reported killed somewhere in the governorate. The Syrian Observatory for Human Rights (SOHR) had claimed the previous day that a large ISIS attack on the Kharata Oil Field, near Deir Ez Zor city, had left two soldiers dead and 12 wounded. This author contacted a pro-regime militiaman in Deir Ez Zor city the following day who denied this claim, however. It is therefore unknown where and how the soldier was killed on April 25.

This decrease in activity in regime-controlled Deir Ez Zor occurred during a spike in attacks across the Euphrates River in Syrian Democratic Forces (SDF)-held Deir Ez Zor. In April, ISIS officially claimed 23 attacks against SDF positions in Deir Ez Zor, up from just nine claims in March. Additional attacks have been reported by local media. It is possible the decline in activity in regime parts of Deir Ez Zor was caused by ISIS cells moving into SDF areas to conduct operations in April.

There were no confirmed attacks in Aleppo or regime-held Raqqa in April. There were two incidents in east Hama this month, both involving mines, and as usual it is unclear how recently the mines were planted. The first came on April 19 during a sweep conducted by the 1579th Battalion of the Syrian army’s 5th Corps in southeast Hama. One truck hit a mine, killing three soldiers and wounding two others. The next day, local media reported the death of a 7-year-old boy from “a mine left over by the ISIS terrorists” near the village of Rasm Koujan, south of Sa’an.

There continues to be no major ongoing anti-ISIS operations this year in central Syria. The bulk of current operations are focused on demining and conducting limited patrols. Demining operations continue in east Hama, south of Palmyra, Arak, and Sukhnah, and are expected to begin in May in parts of Deir Ez Zor. While no new operations were conducted this month, Syrian forces and their foreign allies deployed in central Syria were reportedly on higher alert in anticipation of ISIS’s Ramadan campaign. This heightened level of awareness, however, may have dissuaded some ISIS attacks.

The lack of any significant or coordinated anti-ISIS operations in central Syria raises interesting questions as to why ISIS has been so quiet here of late. This author has previously raised the idea that ISIS was taking time to integrate prisoners it had freed during the January Hasakah prison attack into cells across central Syria. It is possible that this continues to be the case, though the high level of activity in March may serve to counter this theory. Another possibility is that ISIS cells are using this time of low pressure to rest, refit, and plan more medium- and long-term attacks, such as infiltration attempts into southern Homs and the Damascus countryside. Lastly, it may be that ISIS cells from central Syria moved into northeast Syria to assist in attacks against the SDF in April.

Further complicating matters is the fact that this historic lull in ISIS activity in central Syria occurred during Ramadan, when ISIS cells globally have increased the quantity and quality of their attacks. During Ramadan, ISIS claimed an unprecedented 11 attacks in southern Syria, the first time the group claimed attacks here since mid-2021, and 42 attacks in northeast Syria. All of the official media for these attacks framed them as part of the group’s “Revenge for the Two Sheikhs” campaign, a reference to the killings of previous leaders Abu Bakr al-Baghdadi and Abu Ibrahim al-Hashimi al-Quraishi. Yet despite this media and attack campaign, ISIS cells in central Syria not only decreased their activity but continue to refuse to publish claims for their attacks. It is clear that the lack of claims cannot solely be attributed to technical difficulties, as Badia-based cells did release a photoset showing their fighters engaging in religious study, communal meals, and desert patrols. It would therefore seem that ISIS central leadership is intentionally disengaging, at least partially, the Badia insurgency from their broader global campaigns. 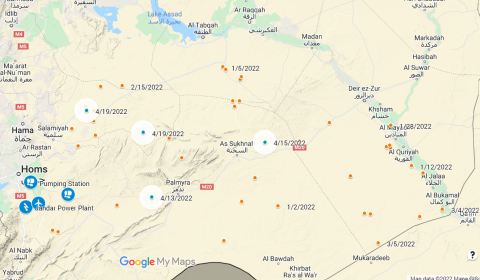 Map of locatable ISIS attacks (highlighted dots) in April 2022. Not pictured are two attacks that occurred somewhere in the Deir Ez Zor countryside. To view an interactive version of this map, please click here.