Following is the May 2022 installment of “ISIS Redux: The Central Syria Insurgency,” a monthly chronicle of attacks by the terrorist group ISIS in central Syria. A review of developments throughout 2021 can be found here, and previous editions in 2022 can be viewed through the following links: January, February, March, and April. A full background and analysis of ISIS’s resurgence in Syria, including the methodology used to collect this data, can also be explored here, here, and here.

ISIS militants carried out at least seven confirmed attacks in May in the Homs, Deir Ez Zor, and Hama governorates. These attacks killed at least three pro-Assad regime fighters and one civilian, while wounding six others. Confirmed ISIS activity in central Syria continued to be very low in May, in line with the historic lows of April. As with April, this reduced level of activity occurred despite no changes in the Syrian regime’s security posture or any significant anti-ISIS operation. Therefore, ISIS’s quietness in May is likely a result of the group’s own strategic calculations, rather than something imposed on them by regime pressure.

As in April, there was no confirmed ISIS activity in Raqqa or Aleppo in May. High quality* attacks dropped for the second month in a row, with ISIS conducting only one such attack: the killing of a colonel in Homs. ISIS activity in May was sporadic, with one or two incidents reported each week. However, the vast majority of attacks were conducted using mines or improvised explosive devices (IED). May was therefore the most passive month for ISIS since this author began tracking the insurgency in detail in 2019. It should be reiterated, however, that this passivity is not a sign that ISIS has been defeated in central Syria. As if to underscore this point, ISIS cells ambushed a civilian transport bus on the major Palmyra-Deir Ez Zor highway on June 2, killing the three soldiers on board.

Compared with April, ISIS activity remained the same in Homs (2), Aleppo (0), and south Raqqa (0), decreased in Deir Ez Zor (1), and increased in Hama (4). As is currently the norm, all incidents in east Hama involved mines. It is unclear how recently these mines were placed.

There were only two confirmed ISIS attacks in Homs in May, both likely carried out with mines or IEDs. On May 18, a soldier was reported killed in the Bayarat area, west of Palmyra. This was the second death in the Bayarat area in as many months. ISIS cells have targeted civilians and local security in this area in the past using mines and IEDs, though most of this type of activity occurred in 2020. On May 23, a colonel was reported killed “in the Badia.” The colonel was from the town of Qaryatayn, in southern Homs, and his death coincided with reports from pro-regime sources about mine threats in the Qaryatayn countryside. It is therefore likely that the colonel was killed somewhere in this area.

ISIS activity in regime-held Deir Ez Zor continues to fluctuate in 2022. After a moderate increase in activity in March, only two attacks were confirmed in April and only one attack in May. A military intelligence soldier from the local branch 243 was reported killed somewhere in the province on May 5.

There were no confirmed attacks in Aleppo or regime-held Raqqa in April. There were four incidents in east Hama in May, all involving mines and all hitting civilians. As usual, it is unclear how recently the mines were planted. The consistency of mine incidents in east Hama targeting civilians despite the continual demining operations being carried out by local security forces may indicate that ISIS cells are still operating in this area, though focusing solely on laying mines. However, two regime soldiers who deployed to separate parts of east Hama in May each told this author that their units encountered no evidence of recent ISIS activity.

There continues to be no major ongoing anti-ISIS operations this year in central Syria. The bulk of current operations are focused on demining and conducting limited patrols. Security forces continue to emphasize east Hama, conducting both demining operations and community outreach programs through the local National Defense Forces and Liwa al-Quds. The Tiger Forces, now called the 25th Division, launched a larger sweeping operation on May 18 that moved from Ithriya in east Hama, to Resafa, in south Raqqa. Unlike past 25th Division sweeps that relied mostly on newer recruits from east Aleppo, this operation drew on the veteran Tiger Forces unit ‘Zarif Regiment’ based out of Salamiyah, Hama. The operation reportedly found no evidence of recent ISIS activity in the Resafa-Zakia area of southwest Raqqa.

Little has changed since April. It remains unclear what ISIS’s long-term plans are in the Badia. The lack of any significant anti-ISIS operations in central Syria raises interesting questions as to why ISIS has chosen to be so quiet here as of late. It is possible that ISIS is still taking time to integrate prisoners it freed during the January Hasakah prison attack into cells across central Syria, that they continue to focus resources on northeast Syria or Iraq, or that its fighters are simply taking this time to rest and regroup. It is worth noting that ISIS attacks in Iraq have been at an all-time high for 2022 since mid-April, averaging 22.5 claimed attacks per week compared to just 10 per week over the preceding months. However, it remains obvious that the reduced level of activity in the Badia is not from any significant degradation caused by regime operations. There have been no reports of killed or captured ISIS fighters in central Syria since 2021, and no recently used ISIS camps uncovered. ISIS will undoubtedly heavily pressure regime forces again, it is only a matter of when. 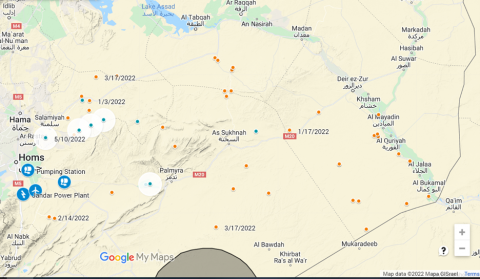 Map of locatable ISIS attacks (highlighted dots) in May 2022. Not pictured are two attacks: one that occurred somewhere in the Deir Ez Zor countryside and one somewhere in Homs. To view an interactive version of this map, please click here.