Following is the February 2022 installment of “ISIS Redux: The Central Syria Insurgency,” a monthly chronicle of attacks by the terrorist group ISIS in central Syria. A review of developments throughout 2021 can be found here, and a full background and analysis of ISIS’s resurgence in Syria, including the methodology used to collect this data, can also be explored here, here, and here.

ISIS militants carried out at least eight confirmed attacks in February, killing at least eight pro-Assad regime fighters and five civilians, while wounding at least two others in the Homs, Deir Ez Zor, Aleppo, and Hama governorates. Following a spike in January, ISIS activity in February dropped to its lowest point since July 2019. This reduction can largely be attributed to the near total absence of confirmed attacks in regime-held Deir Ez Zor, despite attacks in Syrian Democratic Forces (SDF)-controlled Deir Ez Zor remaining steady in February. As in January, ISIS carried out three high quality* attacks in central Syria, although two of these involved mines, one of which hit civilians. Overall, ISIS militants retreated from the more aggressive posture they adopted in January and returned to the more passive approach that dominated their strategy during the second half of 2021.

Of February’s eight attacks, only two were confirmed to have been conducted via small arms. At least five of the remaining six attacks were conducted using mines. However, the two small arms attacks are notable for their locations. The first occurred near the town of Mheen, in southern Homs, and targeted a Syrian Arab Army (SAA) convoy carrying a prominent general. However, the attack only led to minor injuries. This attack underscores local security forces’ fears, expressed in December and highlighted in the 2021 review report, that ISIS militants are attempting to infiltrate this region. The second small arms attack occurred in southern Aleppo near the east Hama border and involved militants stealing 600 sheep from locals. This attack indicates that while ISIS cells may have vacated east Hama, they remain close by and are willing to risk targeting locals in this area again.

ISIS activity dropped to its lowest level ever in Deir Ez Zor (1) while rising slightly in Hama (4) and Aleppo (1). Raqqa (0) and Homs (2) both saw small dips in activity compared to January.

There were two attacks in Homs in February, both of which were high quality. The first occurred on February 14 when an ISIS cell fired on an SAA convoy near the town of Mheen in southern Homs. The small arms attack only led to minor injuries and failed to kill Major General Faris Ghaida, the military commander of the northeast region.

However, this attack follows last month’s mine attack south of Tiyas—just east of Mheen, and further supports regime fears that ISIS is attempting to infiltrate the southern Homs countryside. If ISIS cells can gain a foothold in this area, they will be well within striking range of several critical powerplants and refineries outside Homs city.

The second attack in east Homs occurred on February 20, when a vehicle carrying five Liwa Imam al-Baqir militiamen hit a mine, killing all on board. While no specific location was given, the attack likely occurred along the Homs-Hama administrative border, as the Baqir militia has a base and several outposts there around the town of Tuwaynan. 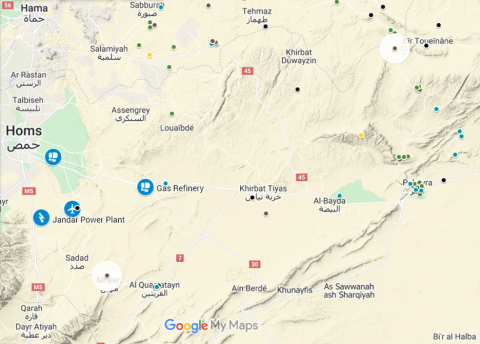 ISIS activity in Deir Ez Zor increased significantly in January 2022, but dropped to its lowest point ever in February. Only one confirmed ISIS attack has been documented—a soldier killed in an unknown location. Never since ISIS lost its caliphate has there been only one attack in regime-held Deir Ez Zor. The reasons behind this significant lull in activity are thus far unclear.

There was no ISIS activity in southern Raqqa in February, following a somewhat elevated level of activity in late 2021 and January 2022.

After three months of no confirmed attacks in southern Aleppo, an ISIS cell carried out one attack in mid-February. On February 15, locals reported that ISIS militants severely wounded two shepherds in the Aleppo countryside north of Ithriya, Hama, and stole 600 sheep. This attack came after a sharp, sustained drop in attacks against shepherds in the nearby northeast Hama region, spurred by an increased presence of local security forces. The attack on shepherds indicates both that cells remain close to the Rahjan-Ithriyah corridor of Hama, and that militants are either confident enough or desperate enough now to return to mass theft attacks here (the stolen sheep will need to be moved elsewhere for sale and/or be split up and supplied to other ISIS cells, all of which takes coordination and confidence in freedom of movement).

Four mine attacks occurred in the nearby east Hama region during the last two weeks of February. One mine east of Aqrab killed two children and a mine north of Sa’an killed three other civilians, while the other two mines each killed one soldier involved in de-mining/sweeping operations. As always, it is impossible to know how recently these mines were placed, but the uptick in mine detonations and the presence of active cells just north of Ithriyah could hint at these being newer mines. 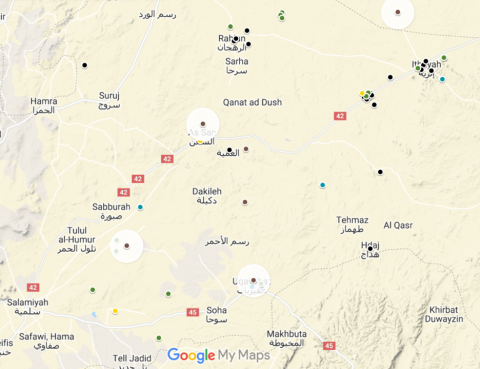 Map of ISIS attacks in Hama and Aleppo in February 2022 (highlighted dots) alongside all other attacks in 2021 and 2022. One attack in east Hama is not shown as no specific location was given.

As in January, there continued to be no major ongoing anti-ISIS operations in February in central Syria. The Russian Wagner Private Military Contractor moved fighters into the Kawm Oasis of east Homs in late February, following potential sightings of ISIS movement nearby. Most patrols, however, were focused in east Hama and southern Aleppo, where the Russian-backed National Defense Forces (NDF) and 25th Division conducted several demining operations. The Military Intelligence-backed local militia “Suqour al-Assad” also continued its regular patrols around the Rahjan area of east Hama, largely focusing on protecting sheep grazing areas.

There was not a single confirmed ISIS attack for the first two weeks of February, and the remaining two weeks saw almost exclusively “passive” mine attacks, making February the quietest month in central Syria in more than two-and-a-half-years. This lull follows a not-insignificant increase in attacks last month and a steady rate of attacks in SDF-held Deir Ez Zor and Raqqa this month. It is unclear why the Badia has been so quiet, but one possibility may be that ISIS is in the process of moving some of the prisoners freed in the January Hasakah attack into the Badia. If that is the case, it would make sense for cells to reduce their activity—particularly in Raqqa and Deir Ez Zor—in order to avoid drawing attention from local security forces. If this is the case, we will likely see another surge in attacks in late March or early April after the new fighters have finished linking up with existing cells or establishing new cells throughout the Badia.

The attacks in Mheen and against shepherds in southern Aleppo likely portend the near-term goals of ISIS in the Badia; continued infiltration into southern Homs and resupplying by targeting civilians. If the hypothesis that ex-prisoners are currently being moved into the Badia is true, ISIS will need to acquire more basic goods—like food—to keep these new fighters supplied. However, it is equally possible that the drop in attacks is due to other factors—such as the death of the caliph in early February, ISIS’s continued focus on northeast Syria, and regime patrols in the Badia—and therefore any future increase in activity will be attributable to some other factor.

Map of locatable ISIS attacks (highlighted dots) in February 2022. This map does not include one attack in Deir Ez Zor and one attack in east Hama which did not have specific locations attributed to them. To view an interactive version of this map, please click here.