Following is the September 2022 installment of “ISIS Redux: The Central Syria Insurgency,” a monthly chronicle of attacks by the terrorist group ISIS in central Syria. A review of developments throughout 2021 can be found here, and previous editions in 2022 can be viewed through the following links: January, February, March, April, May, June, July, and August. A full background and analysis of ISIS’s resurgence in Syria, including the methodology used to collect this data, can also be explored here, here, and here.

ISIS militants carried out at least 13 confirmed attacks in September in the Raqqa, Hama, Homs, and Deir Ez Zor governorates. These attacks killed at least nine pro-Assad regime soldiers and one civilian and wounded six more. There were two high quality* attacks in September. Attacks, high quality attacks, and deaths climbed for the second month in a row following a historic low level reached in July. As with August, September’s activity was concentrated in the southwest Raqqa region, an area that has not witnessed much violent activity for many months but is now experiencing multiple Improvised Explosive Device (IED) and small arms attacks on a weekly basis. The recent trend, begun in August, of ISIS claiming some of its Badia attacks has continued into September, with the group claiming three attacks (two in Tabqa, Raqqa, and one in Deir Ez Zor). These media announcements come on the heels of July’s rare three-page editorial in the group’s weekly Naba magazine detailing the activity of ISIS cells in central Syria, which coincided with reports shared with this author of a restructuring of ISIS’s Badia command.

ISIS attacks increased sharply in Deir Ez Zor (5) and slightly in Homs (2) and east Hama (2). Confirmed ISIS attacks fell slightly in southern Raqqa (3) and Aleppo (0) in September. However, while there were only three confirmed attacks in southern Raqqa, both pro-regime sources and journalists in Syrian Democratic Forces (SDF)-held Raqqa have mentioned throughout the month that ISIS is carrying out IED attacks around Tabqa on a more regular basis, suggesting that more attacks have occurred than this author has been able to confirm. There was one additional IED attack reported in “the Badia” that hit a 25th Division unit. This division has historically patrolled the Khanasir-Ithriya-Resafa triangle between Aleppo, Hama, and Raqqa, and all confirmed attacks involving the 25th Division in 2021 occurred in southern Aleppo. Therefore this author has chosen to record this “Badia” attack as occuring in Aleppo.

As in August, most of the confirmed attacks in Raqqa in September were reported only by ISIS—that is, there was no public pro-regime media acknowledging the attacks. This should not necessarily come as a surprise, however, as attack reporting from Raqqa is very difficult to pin down. The first claim by ISIS was of an IED attack on a regime military vehicle west of Tabqa Airbase in which the group says two soldiers were killed (deaths not included in the author’s data). The second attack occurred on September 11 when pro-regime sources reported one soldier killed and three wounded in an ambush near the Kadir Oil Field along the Raqqa-Homs border. On September 14, ISIS claimed another IED attack west of the Tabqa Airport.

These attacks eerily mirror those conducted by ISIS in August, when the group was confirmed to have carried out four IED and small arms attacks around Tabqa and one mine attack on regime forces near Kadir. This author reached out in early September to a regime soldier with contacts in southern Raqqa, who confirmed that the Tabqa area had not witnessed consistent attacks like this before, and that security forces suspect individuals are regularly planting IEDs at night with the help of insiders. The continuity of target locations and the number of attacks in these areas suggests that ISIS may be pursuing a specific strategic goal in southern Raqqa.

On September 22, a truck carrying soldiers from the Russian-backed 25th Division hit a mine somewhere in the Badia, killing three and wounding one. This event likely occurred in southern Aleppo or southwest Raqqa.

Similarly, there were two reported mine incidents in eastern Hama in September, both targeting regime security forces. The first occurred on September 17 when a soldier was slightly wounded by a mine/IED in Akash, the second on September 25 when two members of the Salamiyah National Defense Forces were killed and a third wounded by a mine or IED near Rahjan. This incident followed two consecutive months of no confirmed attacks or mine incidents in east Hama. 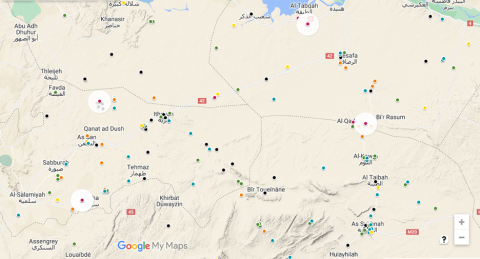 Map of ISIS attacks in southwest Raqqa and east Hama in 2021 and 2022. September 2022 attacks are highlighted. Missing from the map is one attack attributed to “the Badia” which likely occurred in southern Aleppo.

There were two confirmed attacks in Homs in September. The first, and most significant, occurred on September 1 when pro-regime sources reported that two groups of ISIS fighters entered the province from Iraq and ambushed a group of regime soldiers from the 17th Division near al-Tayyara, east of the U.S.-controlled Tanf zone and southwest of Humaymah. Casualties from the battle are unknown, but it is likely at least several soldiers were killed. On September 5, a mine killed a local civilian in Bayarat, west of Palmyra.

ISIS attacks against regime forces in Deir Ez Zor occurred regularly during September, a significant increase compared to August. Several were carried out close to the urban belt along the Euphrates River. On September 6, ISIS claimed to have destroyed a regime military vehicle with an IED near Ma’izila, northwest of Boukamal. On September 13, the Deir Ez Zor National Defense Forces claimed they “thwarted” an ISIS attack on their positions near Kharita, bordering a major oil field north of Deir Ez Zor city. The next day, pro-regime sources reported that a National Defense Forces (NDF) soldier was kidnapped at the nearby oil field. Pro-regime sources also reported the deaths of two soldiers somewhere in Deir Ez Zor province on September 22 and September 24. The soldier killed on September 22 belonged to the 4th Division, which to the author’s knowledge is only deployed in urban areas (versus other units which are responsible for patrolling the desert). 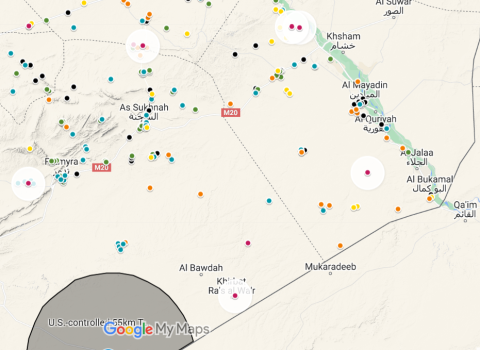 Map of ISIS attacks in east Homs and Deir Ez Zor in 2021 and 2022. September 2022 attacks are highlighted. Missing from the map are two attacks that occurred somewhere in Deir Ez Zor.

As noted in last month’s report, the location, style, and quantity of ISIS attacks these past two months are highly reminiscent of the type of activity seen in 2020. In August, at least five of the attacks targeted regime infrastructure while in September there were at least four such attacks. The emphasis on Tabqa and southern Raqqa, as well as the arrival of new cells from Iraq, may suggest that ISIS has decided to emphasize its central Syrian insurgency and is either laying the ground work for increased support to its northeast insurgency, or is now increasingly drawing on resources acquired in the northeast to bolster the central Syria fight. As stated by this author in August, it remains to be seen if both the number nature of attacks is maintained during the next few months, or if a new large regime counter-ISIS operation launched at the end of September will succeed in degrading ISIS’s capabilities. 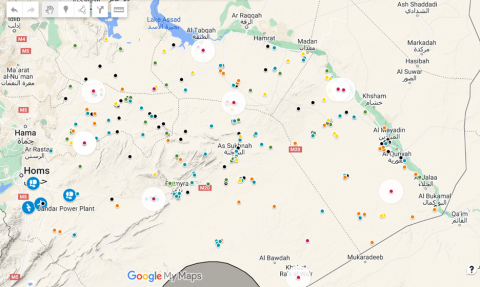 Map of locatable ISIS attacks (highlighted pins) in September 2022 alongside attacks in 2022 and 2021. Not pictured are two attacks that occurred somewhere in Deir Ez Zor and one attack somewhere in “the Badia” that likely occurred in southern Aleppo. To view an interactive version of this map, please click here.