Following is the June 2022 installment of “ISIS Redux: The Central Syria Insurgency,” a monthly chronicle of attacks by the terrorist group ISIS in central Syria. A review of developments throughout 2021 can be found here, and previous editions in 2022 can be viewed through the following links: January, February, March, April, and May. A full background and analysis of ISIS’s resurgence in Syria, including the methodology used to collect this data, can also be explored here, here, and here.

ISIS militants carried out at least 10 confirmed attacks in June in the Homs, Deir Ez Zor, Raqqa, and Hama governorates. These attacks killed at least 25 pro-Assad regime fighters and three civilians, while wounding 26 others, the largest number of deaths attributed to the group since September 2021. Confirmed ISIS activity in central Syria rose in June following historical lows in April and May. As stated in those monthly updates, the reduced level of activity occurred despite no changes in the Syrian regime’s security posture or any significant anti-ISIS operation and was therefore likely a result of ISIS’s own strategic decisions. June demonstrated this, with ISIS cells carrying out several complex ambushes in previously considered secure areas and generally increasing the number of attacks on all fronts.

High quality* attacks also rose in June after a very low April and May. ISIS cells carried out one complex attack in Deir Ez Zor, Raqqa, and Homs. This increase in overall activity also corresponded to a decrease in passive attacks compared with the past two months: only 50 percent of attacks in June involved mines or IEDs.

Compared with April and May, ISIS activity in June rose significantly in all ‘core’ governorates of the Badia: Homs (5), Deir Ez Zor (3), and south Raqqa (1). Incidents decreased in east Hama (1) and remained absent in south Aleppo (0). As is currently the norm, the incident in east Hama involved mines. It is unclear how recently these mines were placed.

ISIS activity in Homs more than doubled in June compared with April and May. On June 1, a soldier was reported killed in the “Tanf Region,” likely by a mine during patrols. The “Tanf Region” is used to describe any area from southern Palmyra south and east to the Iraqi-Homs border. On June 15, another soldier was reported killed in the Palmyra countryside. The next day, two separate mine attacks occurred in eastern Homs. One killed a seven-year-old child in Bayarat, a farm area east of Palmyra that endured mine attacks in both April and May. The other mine went off somewhere in northeast Homs, killing three soldiers and wounding seven others during a demining mission. This sudden frequency of mine explosions in Bayarat suggests that an ISIS cell may have begun laying mines here in recent months. The last attack of the month occurred on June 24, when a soldier was reported killed somewhere in east Homs.

ISIS activity in regime-held Deir Ez Zor continues to fluctuate in 2022. After a moderate increase in March, only two attacks were confirmed there in April and one in May. June saw a slight increase, three attacks, but two of these were significant for their complexity and locations.

On June 2, ISIS fighters ambushed a bus traveling on the Palmyra-Deir Ez Zor highway in the area around Shoula. Four guards were killed, all members of the regime’s intelligence service, and 14 civilian passengers were wounded according to regime news outlets. The fact that the only deaths were from security forces on board raises the possibility that ISIS stopped the bus at a fake checkpoint and executed all soldiers on board. Whether this was a fake checkpoint attack, or simply ISIS fighters firing on the bus as it drove by, this incident marks the first ISIS attack on the Palmyra-Deir Ez Zor highway since January 2021.

On June 7, a 4th Division captain was killed in the Tayyem Oil Field, just outside Deir Ez Zor city. This field was a prime target for local ISIS cells in 2020, and is actively being renovated by Russian and Syrian energy companies. The possibility of renewed ISIS infiltration into this important area is a bad sign for local security forces. Lastly, on June 21, a soldier was reported killed somewhere in the Deir Ez Zor countryside.

There have been no confirmed ISIS attacks in southern Aleppo since March. There was incident in east Hama in June in which a mine killed two civilians and wounded two others near Rahjan. As usual, it is unclear how recently the mines were planted. The consistency of mine incidents in east Hama targeting civilians comes despite the continual demining operations being carried out there by local security forces. This may indicate that ISIS cells are still operating in this area, but focused solely on laying mines.

There was one ISIS attack in southern Raqqa in June, the first incident here since March. On June 20, ISIS fighters ambushed a bus carrying regime soldiers near the Zemlah area as they traveled on the road connecting Resafa with Shoula, killing 13 and wounding three. This area has several gas and oil fields and has witnessed sporadic attacks since late 2020. ISIS officially claimed the attack on the same day, publishing photos showing its fighters inspecting the bus after stopping it, then setting it on fire. The ISIS media is interesting for several reasons: It is the first ISIS claim of an attack in central Syria in 2022 (despite this author documenting at least 66 attacks in that time) and only the second claimed attack since July 2021. The pictures also show that ISIS fighters brought the bus to a stop, either via firing on it or with by using a fake checkpoint, and that the bus was likely traveling alone or in a small convoy. This would mark a shift in regime strategy from early 2021, when the regime began moving soldiers and civilians through the Badia in large convoys through the Badia to prevent ISIS attacks.

There have been no major ongoing anti-ISIS operations this year in central Syria. The bulk of current operations are focused on demining and conducting limited patrols. Syrian regime, Russian, and Iranian forces continue to expand the security zone around Palmyra in the hopes of enticing more western tourism to the ancient site. There was one positive, if brief, regime operation around Jabal Bishri in late June. Following the June 20 attack near Zemlah, Liwa al-Quds fighters embarked on a five-day sweeping mission of the Jabal Bishri area, receiving Russian air support. On June 27, the unit posted a video to its social media pages, showing the capture of several alleged ISIS safehouses (though only containing some clothes) and at least two destroyed technicals allegedly belonging to ISIS. One clip showed a scene from a Russian drone of a technical and its crew being targeted, with at least two ISIS members confirmed killed.

June’s increase in ISIS activity and high quality attacks should serve as a reminder that as long as the Syrian regime is incapable of pressuring them, ISIS retains the ability to escalate in central Syria. While the number of attacks pales in comparison to the second half of 2020, the two highway attacks in June are unprecedented in the past 18 months. One of the regime’s major achievements in early 2021 was securing the highways and ending the regular attacks on civilian and military convoys. That victory has slowly eroded in 2022, with small arms ambushes occurring first in January, and again in March. June’s two ambushes therefore represent a worrying trend and decaying regime security in  important transit lines across central Syria. 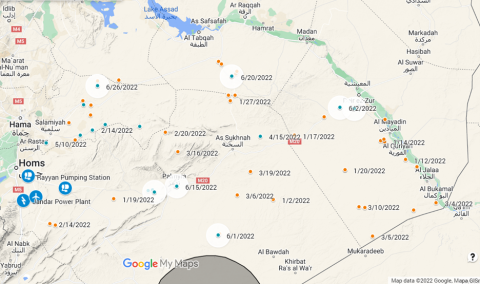 Map of locatable ISIS attacks (highlighted dots) in June 2022. Not pictured are three attacks: one that occurred somewhere in the Deir Ez Zor countryside and two somewhere in east Homs. To view an interactive version of this map, please click here.