Following is the October 2022 installment of “ISIS Redux: The Central Syria Insurgency,” a monthly chronicle of attacks by the terrorist group ISIS in central Syria. A review of developments throughout 2021 can be found here, and previous editions in 2022 can be viewed through the following links: January, February, March, April, May, June, July, August, and September. A full background and analysis of ISIS’s resurgence in Syria, including the methodology used to collect this data, can also be explored here, here, and here.

ISIS militants carried out at least 12 confirmed attacks in October in the Raqqa, Hama, Homs, Aleppo, and Deir Ez Zor governorates. These attacks killed at least nine pro-Assad regime soldiers and two civilians and wounded 11 more. Additionally, there were three high quality* attacks in October. Attacks, high quality attacks, and deaths remained consistent with the recent increase in ISIS activity following a historic low point reached in July. However, unlike August and September, October’s confirmed activity was concentrated in Homs, rather than in the southwest Raqqa region. (It is worth noting that all but two of the confirmed southwest Raqqa attacks since August have come via ISIS claims, so this perceived change in activity may only reflect a change in ISIS media strategy, rather than a drop in actual attacks.)

ISIS continued the trend it began in August of claiming some Badia attacks, claiming in October one attack in southern Aleppo and two in southwest Raqqa. These media announcements come on the heels of July’s rare three-page editorial in the group’s weekly Naba magazine detailing the activity of ISIS cells in central Syria, which coincided with reports shared with this author of a restructuring of ISIS’s Badia command. October also saw the launching of the first major anti-ISIS operations of the year by regime forces, focused primarily in eastern Hama, Homs, and Deir Ez Zor.

ISIS attacks increased sharply in Homs (6) following a three-month lull in the province, dropped sharply in Deir Ez Zor (1) after a spike in confirmed activity in September, and in Raqqa (2) after two months of elevated activity. Confirmed ISIS activity remained steady in east Hama (2) and in southern Aleppo (1). The sharp increase in Homs attacks is partially attributable to the regime’s new anti-ISIS operations, which have encountered many mines and Improvised Explosive Devices (IEDs) across the region.

ISIS claimed all three of the attacks documented attacks in Aleppo and Raqqa in October (none of which were reported on by regime media, which is standard for these areas). The first occurred on October 5, when ISIS claimed an IED attack on a regime military truck west of Khanasir, Aleppo. The second claim was for a similar IED attack on a regime truck west of Tabqa, Raqqa, on October 24. Lastly, ISIS claimed a small arms attack on a regime barracks near the Tabqa Airbase on October 30, which is confirmed to have killed at least one soldier. These are the ninth, 10th, and 11th ISIS claims in central Syria since the Naba magazine editorial in late July. Prior to that, ISIS had only claimed one attack in central Syria in 2022.

There were two reported incidents in eastern Hama in October that could be attributed to ISIS. The first occurred on October 6, when local Facebook pages reported that unknown men on a motorbike had killed two civilians and wounded a third in a drive-by shooting while the civilians were fishing in the countryside. The attack reportedly occurred “near Abu Huwadid, in the northeast Salamiyah countryside.” This author found two villages referred to as Abu Huwadid on online maps, one southeast of Salamiyah, near Uqayribat, and one in the far northeast, between Sa’an and Wadi Azeeb, that is also referred to as Rasm Ahmar. Both of these areas are near previous ISIS hotspots. Furthermore, the second Hama incident occurred on October 17 when a mine or IED destroyed a regime National Defense Forces (NDF) truck near Wadi Azeeb, potentially linking the October 6 assailants with the nearby mine attack a week later. The October 17 attack killed three regime fighters, including the commander of the unit, and wounded six others. 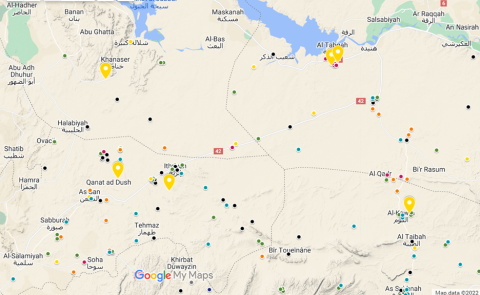 Map of ISIS attacks in southern Aleppo, southwest Raqqa, and east Hama in 2021 and 2022. October 2022 attacks are highlighted.

There was one confirmed attack in Deir Ez Zor in October. Two local members of the regime’s 4th Division were killed on October 3 in the village of Toub, next to Bouleel, on  the Euphrates River between the cities of Mayadin and Deir Ez Zor. If the two men were killed by ISIS it would mark a rare attack deep in the urban belt controlled by the regime, and along the critical smuggling routes across the Euphrates. However, local journalist Zain al-Abidin told this author that, according to his sources, it is believed the men were killed alongside three other Iranian-backed militiamen due to an internal conflict over control of the smuggling route. Al-Abidin said a similar incident occurred nearby in Salihiyah on October 6 when 4th Division soldiers killed six others in a smuggling dispute. This author could not verify the alleged October 3 incident, and an NDF member he spoke to denied that there was infighting in Deir Ez Zor. However, with the continuing crash of the Syrian economy, controlling smuggling has become exceedingly important for armed groups to maintain funding, so it would not be surprising if battles broke out over the issue.  However, even if the killing was a bout of regime infighting rather than an ISIS attack, such incidents only weaken regime security and play into ISIS’s hands.

Homs experienced the most ISIS attacks in October. The first attack was reported on October 3, when serious fighting broke out east of al-Kawm between ISIS cells and regime militiamen from Liwa al-Quds and the local NDF. Security forces were forced to abandon their outlying positions despite the use of regime warplanes. It is worth noting that just three weeks earlier, a group of ISIS fighters had ambushed regime forces north of al-Kawm, near the Kadir Oil Field.

On October 9, a soldier from the 4th Division’s Security Office was reported killed somewhere on the Palmyra-Deir Ez Zor highway, likely by a mine or IED. On October 12, a regime source reported that three 17th Division soldiers had recently disappeared while on patrol east of the Tanf zone, likely either kidnapped or had deserted to ISIS (ISIS cells entering from Iraq had ambushed 17th Division soldiers in this area on September 1 as well). On October 18, a member of the Russian Wagner PMC was reportedly injured by a mine while assisting Liwa al-Quds fighters in an anti-ISIS clearing mission around the Jazal Field area of Homs. Local pro-regime media pages reported the death of a soldier somewhere in Homs on October 29, and on October 31, a mine or IED destroyed a regime military truck near Palmyra, killing one soldier and wounding four. 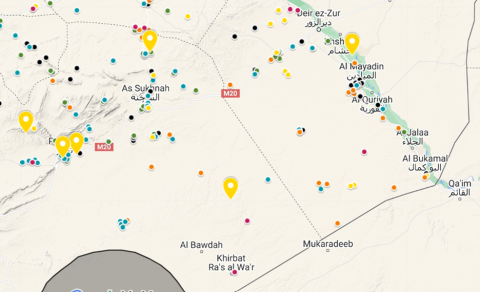 Map of ISIS attacks in eastern Homs and Deir Ez Zor in 2021 and 2022. October 2022 attacks are highlighted. Missing from the map is one attack that occurred somewhere in eastern Homs.

The Syrian regime and its Russian and Iranian allies launched new, widespread anti-ISIS operations at the start of October, the first serious operations of 2022. Russian military officials traveled to southern Raqqa to meet with leaders of the local al-Ajil Tribe early in the month in an attempt secure local assistance in rooting out the cells targeting Tabqa Airbase. Meanwhile, Iranian-commanded Afghans from Liwa Fatemiyoun deployed to the T3 Pumping Station southwest of Palmyra in order to conduct new sweeping operations northeast towards the Wadi Doubayat area, which has long been an ISIS safe zone. Elsewhere in Homs, Syrian Army units from the 17th and 18th Divisions continued patrols which began in September east of al-Tanf along the Iraq border. The regime believes this area is being used by ISIS cells to infiltrate Syria from Iraq. In Deir Ez Zor, NDF, tribal militias, and 4th Division fighters have been conducting sweeps in the Mayadin region. NDF fighters have also been conducting de-mining operations in east Hama throughout October.

These operations, which are focused on a mix of demining (particularly in east Hama and east Homs) and rooting out ISIS caches and hideouts (mostly in southeast Homs and Deir Ez Zor) have led to the discovery and destruction of several ISIS caches, particularly by Liwa al-Quds fighters in the mountains north of Palmyra.

October’s recorded incidents somewhat bucked the more high-tempo trend set in August and September. While ISIS cells managed to conduct at least four serious attacks—the fighting in Kawm, which seized regime positions, and the IEDs and small arms attack in Khanasir and Tabqa, deep within regime territory—the largescale regime operation is clearly pressuring the group across the Badia. At least six of October’s attacks can in some way be attributed to the anti-ISIS operations—units either encountering old mines or being hit by new mines/IEDs while venturing into ISIS hotspots.

The continued absence of more regular, complex attacks (i.e., the October 3 Kawm attack) compared with 2020 suggests that ISIS does not have a large number of fighters in central Syria, or at least they are not active at any one time. It could be that ISIS is still focusing its forces on northeast Syria (the group claimed 15 attacks here in October), or simply it does not have enough men to risk carrying out more brazen attacks since the regime flooded the Badia with more soldiers in 2021. As with northeast Syria, the group seems to have settled on a longer term, methodical approach, unwilling to risk too many assets at a time when they have no hope of returning to territorial control, but still working to keep pressure on local security forces while they recruit, train, and fundraise for the next generation of fighters. However, the continued activity around the Tabqa airbase should not go unheeded by policymakers, as such brazen attacks against a key regime and Russian security node suggests that ISIS believes its Raqqa cells are in a strong position, which could ultimately lead to increased security threats in SDF-held areas of Raqqa. 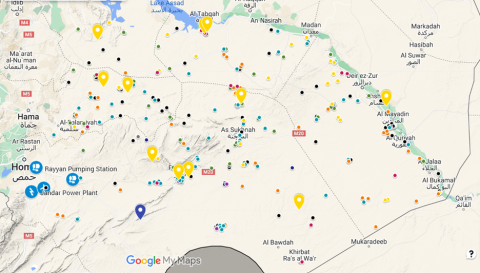 Map of locatable ISIS attacks (yellow pins) in October 2022 alongside attacks in 2022 and 2021. Not pictured is one attack that occurred somewhere in east Homs. To view an interactive version of this map, please click here.

RT @NotThatBigIan: This has clear implications for the criminal justice system, prevention and early intervention. But are we joined up eno…

We're so proud of the work of our @CEP_Germany colleagues and these engaging webinars! Don't miss presentations fro… https://t.co/ruCzgBuCV6

Sadly to be expected. On September 7, 2021, the Taliban announced the official appointments within their caretaker… https://t.co/7Z362svlhi

The public execution, in addition to public lashings of men and women on charges such as robbery and adultery in re… https://t.co/2CYaquR5pb

The Taliban carried out a public execution of a man accused of murder in western #Afghanistan, the first publicly c… https://t.co/exUz8eSsW6