Following is the November 2021 installment of “ISIS Redux: The Central Syria Insurgency,” a monthly chronicle of attacks by the terrorist group ISIS in central Syria. Previous editions of ISIS Redux can be viewed through the following links: October, September, August, July, June, May, April, March, February, and January 2021; and December, November, October, September, August, July, June, May, and April 2020. A full background and analysis of ISIS’s resurgence in Syria, including its methodology, can also be explored here, here and here.

ISIS militants carried out at least 12 confirmed attacks in November, killing at least 11 pro-Assad regime fighters and eight civilians, while wounding at least four others in the Homs and Deir Ez Zor governorates. Overall, the number of ISIS attacks dropped slightly from October, though high quality* attacks increased back to the level seen in late summer. November was the first month since August 2019 that ISIS carried out confirmed attacks in only Homs and Deir Ez Zor provinces. Despite, or perhaps because of this, attacks in both governorates increased compared to October. November also saw the first official ISIS claim of an attack against regime forces in central Syria since July.

ISIS fighters had shifted their attack style throughout August and September, adopting a more aggressive posture, relying less on improvised explosive devices (IED) and mines and more on small arms ambushes. In October, ISIS appeared to have reverted to their pre-August strategies, relying on mines or IEDs for at least half of their attacks. However, despite the reduced activity, November saw a slight return to more aggressive attack types. Not only were there three high quality attacks in November compared to zero in October, but at least seven of the 12 confirmed attacks involved small arms, while there was only one confirmed mine attack and four attacks where the means was unknown. Furthermore, ISIS fighters launched multiple attacks on the same checkpoint and attempted to ambush a nearby regime convoy in Deir Ez Zor over the course of three days, signaling renewed confidence in their ability to carry out attacks on larger military targets without taking losses.

Confirmed attacks in November increased in Homs (5) and Deir Ez Zor (7) while dropping to zero in Hama, Raqqa, and Aleppo. Despite the decrease, activity in every governorate was at or above the levels registered in August. Despite the lack of confirmed attacks in the three historically ‘periphery’ governorates, ISIS activity in Deir Ez Zor and Homs remained elevated. After a steady decline throughout the spring and early summer, both the number of ISIS attacks and high quality attacks in Deir Ez Zor in November matched a nine month high. In other words, where cells were active this month, activity trends upward.

Four of the five confirmed Homs attacks in November occurred during the first nine days of the month, with the fifth occurring on November 27. In the first two days of November, ISIS cells clashed repeatedly with Pakistani fighters from the Iranian-backed Liwa Zainebiyoun outside Wadi Doubayat, south of Sukhnah. The Wadi has remained under ISIS control despite the regime’s recapture of the Badia in 2017, and significant fighting occurred in this area in August.

On November 4, seven civilians were killed when their vehicle hit a mine or IED in the mountains north of Palmyra. On November 9, regime forces found the body of a known weapons smuggler, believed to have had a history of dealing with ISIS, executed near the Kawm Oasis. Lastly, on November 27 a soldier was reported killed somewhere in eastern Homs.

ISIS activity in Deir Ez Zor continued to be focused in the northwest of the province, around both Shoula and the eastern slope of Jabal Bishri. This trend began in August when at least one ISIS cell was reported to have moved into the Shoula area.

On November 10, a soldier was reported killed in the Boukamal region, another area of Deir Ez Zor where ISIS activity has been low but consistent. On November 13 and 15, ISIS cells carried out three attacks around the Bir Dohoul checkpoint, south of Shoula. On the 13th, cells attempted to ambush a regime convoy, though no soldiers were killed. On the 15th, ISIS fighters launched at least two separate attacks directly against the checkpoint, withdrawing both times after failing to dislodge the defenders.

Also on November 13, ISIS fighters ambushed a convoy of pro-regime Shaitat tribal fighters near the salt mine outside Tabni. The initial ambush involved guns and IEDs and left all seven tribesmen dead, including a commander. ISIS militants documented the aftermath and then laid new mines, which wounded five Shaitat militiamen who later responded to the first attack, according to one of the survivors interviewed by this author. ISIS officially claimed these attacks several days later. 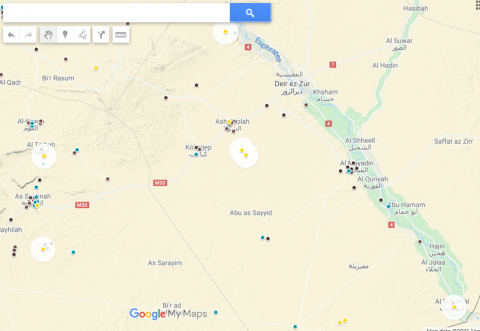 The Assad regime has continued to conduct small scale patrols across the Badia. Throughout November, elements of the 5th Corps continued to patrol southern Raqqa while various Hama-based National Defense Forces (NDF) units conducted de-mining operations across eastern Hama. The SAA’s 11th Division also continues to conduct sweeps around the strategic town of Qaryatayn, where ISIS cells have conducted intermittent attacks every few months since late in 2020.

The October attack in Damascus and the surge in attacks in September were reminders that despite a general decrease in activity in the Badia this year, ISIS cells remain present and capable of carrying out complex attacks. Statistically, November’s totals appear to show a continued decrease in ISIS activity. However, this was due to a lack of attacks in the three ‘periphery’ governorates, Hama, Aleppo, and Raqqa. Meanwhile, activity in Deir Ez Zor increased for the second month in a row and activity in Homs more than doubled compared with October.

Additionally, November saw a surge in ISIS attacks across the northeast, with the group carrying out at least 27 attacks in eastern Deir Ez Zor, northern Raqqa, and Hasakah governorates, including an attempted prison break and car bombing. This constitutes a massive increase in confirmed ISIS activity in the northeast compared to October. Cells there continue to have the ability to increase operational tempo at will, thanks to the persistence of the Badia network, which continues to provide training camps and safehouses for ISIS networks across Syria and Iraq.

As stated in last month’s update, the continued low level of activity in central Syria suggests that while ISIS cells may have reconstituted themselves following several months of regime operations, they are not yet able or not yet choosing to conduct sustained, multi-week offensives like they were at this time last year. However, the November 13 ambush in western Deir Ez Zor and ISIS’s official claim of the attack shows that the group possesses the ability to operate close to the regime’s major urban centers in the Badia. 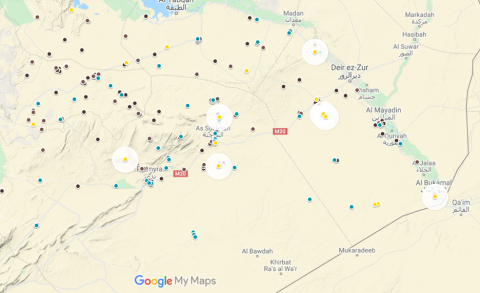 Map of locatable ISIS attacks (highlighted dots) in November 2021. This map does not include three attacks which did not have specific locations attributed to them; two “Deir Ez Zor countryside” attacks and one “east Homs” attack. To view an interactive version of this map, please click here.