ISIS militants carried out at least 30 attacks in October, killing at least 32 pro-Assad regime fighters and two civilians in the Homs, Deir Ez Zor, Raqqa, Hama, and Aleppo governorates. These attacks constitute a slight decrease in confirmed ISIS activity since its peak in August and September. However, it should be noted that there were only three reported mine or Improvised Explosive Device (IED) attacks in October, compared to 15 such attacks over the previous two months. Therefore, the slight drop in overall attacks may simply be the result of reduced reporting on mine attacks in the Badia (Syrian desert).

Furthermore, October witnessed the second highest number of high quality* attacks since the insurgency began, mostly concentrated in Homs (3) and Hama (4). There were also high quality attacks reported in Deir Ez Zor (2) and in Raqqa (1). While ISIS continued to increase the number of attacks in Homs (10) and maintained a steady level of low quality attacks in Deir Ez Zor (8), the group’s emphasis appeared to shift to south Raqqa (5) and then east Hama (5) this month.

While Raqqa and Hama each only have five confirmed attacks, the scale of the fighting in these areas increased significantly this month. In Raqqa, local security forces told this author that regime forces and ISIS fighters were engaged in light clashes nearly every day for the first two weeks of October (due to the need for methodological consistency, only specific clashes were recorded, thus Raqqa’s five confirmed attacks does not fully capture the level of activity). The most significant of these clashes in Raqqa occurred on October 10, when ISIS fighters successfully overran a National Defense Forces (NDF) headquarters, capturing weapons and vehicles and killing at least five soldiers and staff. October 14 marked the last ISIS-regime clash for the month in the province. Six days later, ISIS insurgents in east Hama launched one of their largest attacks on Assad regime forces to date.

Between October 20 and October 22, ISIS seized several villages near Rahjan, in northeast Hama close to the administrative border of Idlib. ISIS had previously raided Rahjan on April 10, in a one-day battle that marked a significant geographic expansion for the group at the time. ISIS then followed that incursion by harassing nearby local security forces in August and September. This time, ISIS fighters managed to capture and hold villages, forcing Syrian Arab Army (SAA) soldiers to fall back and set up artillery positions. For two days, the militants withstood artillery barrages. On the third day, Russian attack helicopters arrived and managed to destroy several ISIS vehicles, though most had already been abandoned. By the time the air force arrived, it appeared the militants had already withdrawn. Both sides suffered approximately five deaths and at least 14 regime soldiers were also wounded.

While the most significant, this was not the first high quality attack in east Hama in October. On October 6, ISIS militants successfully raided a large, supposedly secret weapons depot near Fasida, an area the militants have attacks with increasing regularity since September. Further west, near Uqayribat, ISIS fighters attempted to raid another regime position but were turned back when one of their vehicles hit a mine while approaching the village.

As in past months, ISIS successfully assassinated several pro-regime commanders in October. On October 9 a mine west of Palmyra killed the head of a local Military Security detachment and also wounded a visiting Military Security colonel. On October 16, the commander of the 7th Brigade’s 3rd Battalion, a unit in the Russian-run 5th Corps, was killed by a mine in Deir Ez Zor. Colonel Ali Hassan was a veteran commander in the region who enjoyed a close relationship with the Russian military, as evidenced by numerous pictures of he and Russian officers jointly planning anti-ISIS operations. Lastly, on October 23, the commander of the Eastern Sector of the Salamiyah National Defense Forces Center was wounded by a mine near Salamiyah, Hama. He is the fifth NDF commander targeted since mid-August.

Despite the modest dip in attacks this month, October witnessed additional geographic expansion of ISIS activity. On October 2, a small ISIS team managed to infiltrate the city of Tabni in western Deir Ez Zor and attack the police station. According to a regime fighter, one militant successfully detonated a suicide belt while another was captured and executed by local security forces. At the same time, ISIS militants set up a fake checkpoint just south of the city of Qaryatayn, just 17 miles from the administrative border of Damascus and more than 30 miles from any previously known ISIS attack. The fake checkpoint triggered clashes with SAA units stationed nearby and a hours-long firefight ensued. The ISIS fighters were reportedly able to successfully escape. Lastly, after a full month of quiet, ISIS reignited the Sukhnah front on October 6, launching a coordinated attack on several checkpoints around the city, successfully seizing weapons and vehicles before withdrawing.

ISIS was able to carry out multiple attacks on 10 different days in October, with one day in which three attacks were conducted across the Badia. This marks a slight decrease in the frequency of same-day attacks compared with September.

October was rife with warnings about the rapidly growing capabilities of ISIS in the Badia. ISIS seized regime positions on four separate occasions—each time gaining new weapons and vehicles—and successfully assassinated local commanders for the ninth month in a row. ISIS not only expanded the geographic reach of its attacks to the Damascus border, but was able to set up fake checkpoints in the area. Most ominously for the Assad regime, the group managed to conduct a multi-day battle far from its core territory, and withstood artillery and air bombardment before somehow escaping to safety, despite being ostensibly surrounded.

In retrospect, it appears that from August through October ISIS conducted a “late summer offensive,” the kind regularly seen in neighboring Iraq. ISIS activity dropped off significantly following the east Hama battles, and it is likely we will see a continued decrease in attacks in November. As winter sets in, ISIS cells will likely prioritize a few significant high quality attacks or raids, otherwise focusing on mine/IED activity and small harassing attacks. As always, northeast Homs remains the key to ISIS expansion into east Hama and central Homs.

Which region ISIS focuses on in November depends on whether the regime has properly shifted security forces in response to the east Hama and Qaryatayn attacks in October. If the answer is yes, then ISIS can be expected to redirect high quality attacks to Deir Ez Zor, which was largely spared from such activity in October. However, if the regime has failed to adequately reinforce its western regions, ISIS will undoubtedly attempt to strike again into northeast Hama and central Homs. 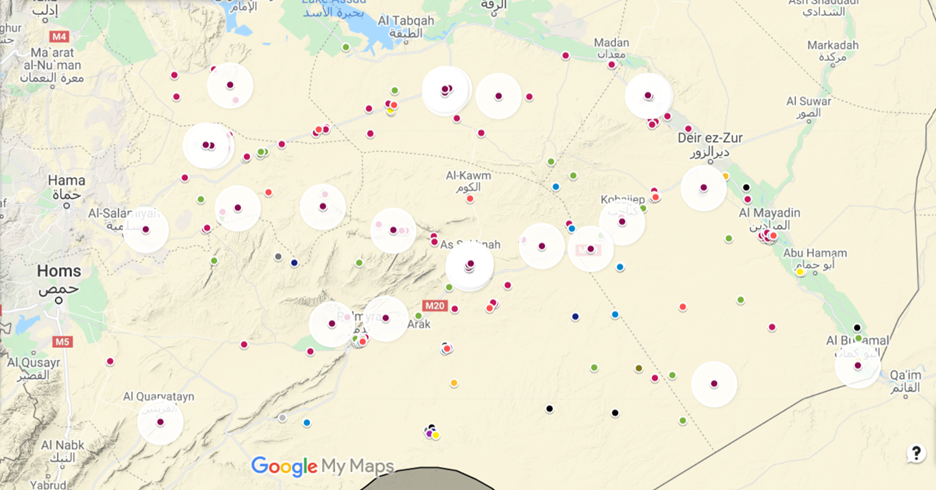 Map of locatable ISIS attacks (highlighted dots) in October. To view an interactive version of this map, please click here.