In August, ISIS militants carried out at least 35 attacks, killing at least 76 pro-Assad regime fighters in the Homs, Deir Ez Zor, Raqqa, Hama, and Aleppo governorates. These attacks constitute a major escalation in ISIS’s insurgency. The overall number of attacks, high quality* attacks, and reported pro-government deaths exceeded those from any month since ISIS lost control of this region in 2017. Homs saw the greatest number of documented attacks (12), with Deir Ez Zor (10) and Raqqa (9) following closely.  The more than two-fold increase in attacks compared with previous months in Raqqa is overshadowed only by the more than three-fold increase in attacks in Deir Ez Zor.

Importantly, attacks in Deir Ez Zor were not evenly spread throughout the governorate, but focused primarily in the western urban belt stretching from Deir Ez Zor city along the Euphrates to Ma’adan, and secondarily in the desert west of Mayadeen. This first geographic concentration of attacks marks a new expansion of ISIS activity, likely from cells originating in Jabal Bishri to the west and Raqqa to the north. These attacks culminated in an August 27 ambush that left as many as 30 pro-regime National Defense Fighters (NDF) dead, along with the NDF sector commander for western Deir Ez Zor. Most of the men killed, including the commander, hailed from the local Busaraya tribe. The massacre triggered a massive mobilization of tribal members from the pro-regime Liwa al-Quds, Qaterji Forces, and NDF deploying to the region to conduct their own anti-ISIS operations in lieu of what one tribal fighter told this author was an abandonment by the Syrian army. The operation began on August 30, with at least two ISIS fighters killed in the desert west of the town of Musarib, the site of the August 27 ambush. The operation continues as of the publishing of this post.

A Russian major general and two more regime commanders were also killed this month. On August 18, ISIS militants conducted a double-improvised explosive device (IED) attack in the Tayem Oil Field, just outside of Deir Ez Zor city, first killing five NDF fighters and then killing the NDF Mayadeen Sector commander alongside Russian Major General Vyacheslav Gladkikh. The commander of a local Liwa al-Quds auxiliary force was killed on August 11 in a complex attack near Tabni, Deir Ez Zor, alongside three other fighters attempting to reinforce a 4th Division unit that had been hit by an IED nearby. And in the early morning of August 12, ISIS ambushed a produce truck and its Military Security escort in Deir Ez Zor, killing the truck driver and a platoon commander.

August had eight days in which ISIS carried out two or more attacks, and three days in which three attacks were conducted across the Syrian desert (known as the Badia). The rate of documented attacks in August is unmatched since 2018. ISIS’s ability to carry out such frequent same-day attacks implies that the group has developed a robust logistical and strategic capability.

The Syrian regime continued to send fighters to the Badia this month, with at least two documented batches of new recruits arriving in Deir Ez Zor city to join the 17th Division and the fifth deployment this year of Damascus NDF fighters to the Euphrates area. Following the August 15 attacks near Mayadeen, the Deir Ez Zor NDF announced it was creating a string of new checkpoints and defensive positions along the Mayadeen-Deir Ez Zor highway. Conversely, Russia’s lackluster response to the killing of a major general speaks volumes about its inability and lack of interest  in responding to the ISIS threat. The Russian military claimed to have killed 327 ISIS fighters in the week following Gladkikh’s death, a laughably outlandish number. In reality, Russia’s response involved several isolated airstrikes and, according to a local tribal fighter, Russia has yet to provide any military assistance to the pro-regime forces fighting ISIS in west Deir Ez Zor.

ISIS attacks in the Badia have been on the rise throughout 2020, as the group continues to expand in strength and operational capacity. While it is unlikely that September will see the same growth or severity of  attacks as in August, this month’s trends will likely continue—that is, Raqqa, west Deir Ez Zor, and west Mayadeen will continue to be the hotspots for the near future. The tribal response triggered by the August 27 massacre will most likely push ISIS cells back onto Jabal Bishri where they will hunker down and wait out the operation. In Homs, ISIS will continue its strategy of exerting pressure around the city of Sukhnah, no doubt seeking some opportunity to raid the city’s warehouses, while sending out groups to attack regime positions further west, similar to the T4 attack. East Hama and Southeast Aleppo both experienced a decrease in ISIS attacks this month, partially due to the formation of local defense militias. ISIS will wants to renew its activity in these areas and may take the opportunity to do so while pro-regime forces are so heavily focused on western Deir Ez Zor. 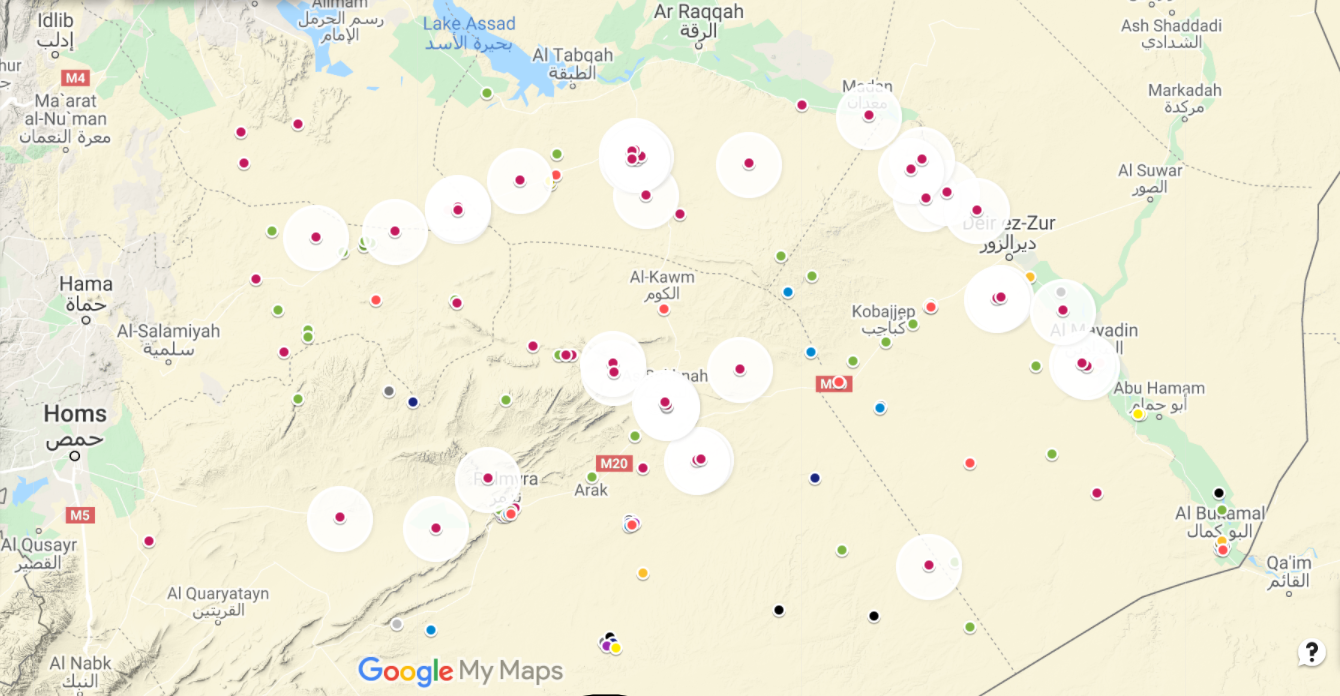 Map of locatable ISIS attacks (highlighted dots) in August. To view an interactive version of this map, please click here.