In July, ISIS militants carried out at least 23 attacks, killing at least 29 pro-regime fighters in the Homs, Deir Ez Zor, Raqqa, Hama, and Aleppo governorates. The number of attacks and fatalities were both higher compared to June and are consistent with the trend established earlier in the year. July marked the third month in a row that ISIS carried out at least one high quality* attack in all four provinces in which it is active.

More significantly, July marked the first month of sustained ISIS activity in regime-held Aleppo province since the terrorist group was expelled in 2017. ISIS killed at least eight regime fighters in four attacks, including two high quality attacks. These attacks were conducted in two distinct regions: in the countryside around the town of Khanasir and around the Durayhim Gas Field, in the far southeast corner of Aleppo province near the Raqqa governorate. These attacks culminated in the killing of seven regime soldiers on July 28 in a village west of Khanasir, less than 15 miles from the Idlib governorate.

Among ISIS’s seven high quality attacks this month were targeted killings of the Syrian Army 4th Division’s commander of the Mayadeen Sector in Deir Ez Zor and of a Border Guard colonel in southeast Raqqa. This is the second 4th Division sector commander ISIS has assassinated in as many months. Reported attacks in Deir Ez Zor continue to be few and far between, although a July 9 ambush of a Border Guard position left at least three regime soldiers dead. Instead, ISIS activity appeared heavily concentrated around the Sukhnah area of east Homs, where ISIS militants regularly attacked regime forces with mines, IEDs, and heavy machine guns. On July 28, approximately 40 ISIS militants attempted to raid an Islamic Revolutionary Guard Corps (IRGC) warehouse on the southwest edge of the city, engaging in a five-hour battle with local security forces before ultimately retreating.

July also witnessed an increase in reported anti-ISIS operations by the Syrian regime, largely due to new combing operations in southern Aleppo. In the Jabal Amr region of Homs, regime forces captured three men and killed three others it accused of being ISIS members. Other operations occurred in east Hama, Raqqa, and southwest Deir Ez Zor.

Despite a slight drop in attacks in June, ISIS activity in the Badia continues its steady increase. More concerning, ISIS cells in southern Aleppo appear to have become active this month, marking a sharp geographic expansion of the insurgency. There has also been an increase in ISIS propaganda focused on central Syria, both in terms of attack claims and pictures of attacks. All of these trends have continued in the first half of August, another indication that the Syrian regime has wholly failed to address this insurgency. 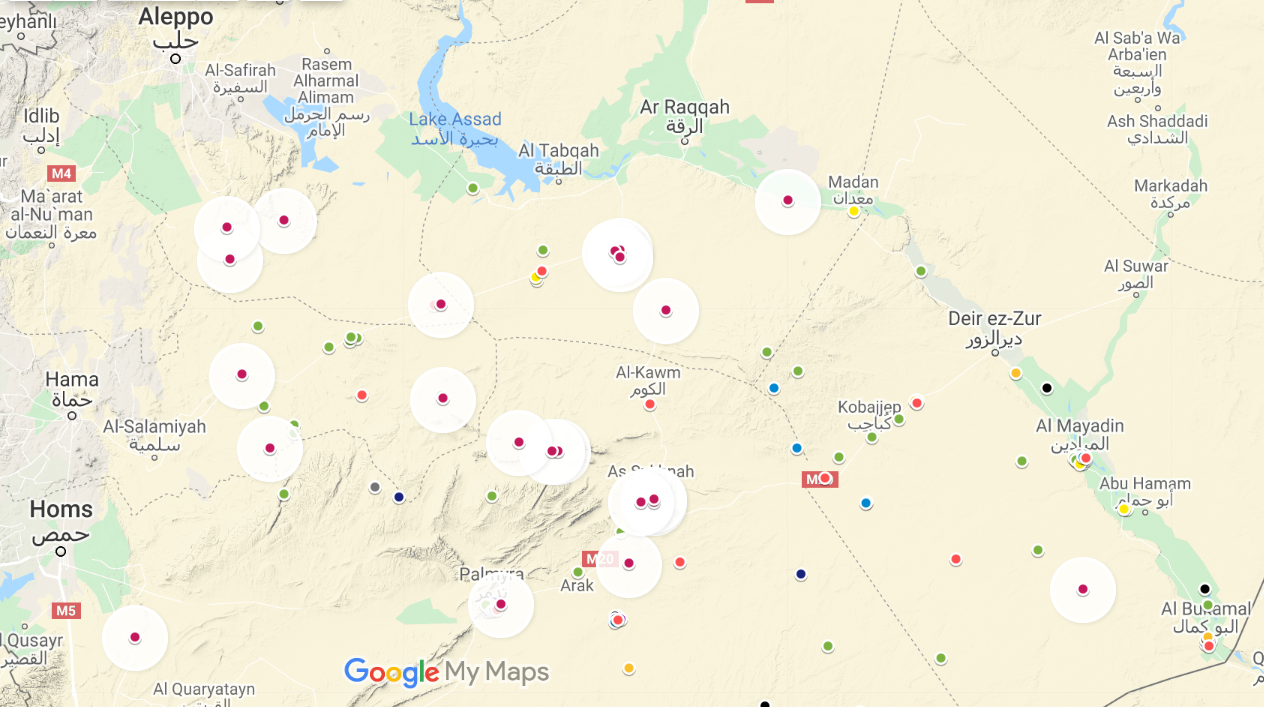 Map of locatable ISIS attacks (highlighted dots) in July. To view an interactive version of this map, please click here.