ISIS Redux: The Central Syria Insurgency in May 2020

Following is the May installment of “ISIS Redux: The Central Syria Insurgency,” a monthly update on the ongoing attacks by the terrorist group ISIS in central Syria. The April update, which detailed ISIS’s killing of at least 34 Syrian regime loyalists, can be read here, and a full background and analysis of ISIS’s resurgence can be read here.

Following a lull in the second half of April, ISIS attacks increased in both quantity and geographic diversity during May. This boost in activity coincided with increasingly persistent and widespread anti-ISIS operations conducted by the Syrian regime and its allied militias. Both the ISIS attacks and counter-insurgency operations spread across four governorates: Hama and Raqqa in the north, and Homs and Deir Ez Zor in the south.

ISIS killed at least 27 Syrian regime-affiliated fighters in 18 confirmed attacks occurring on at least 17 days in May. While May had the greatest number of attacks as well as days with reported attacks in 2020, it ranks as only the third deadliest month (behind April and January, respectively). ISIS did not carry out major ambushes or large, complex operations, likely due to the intensity of the Syrian regime’s anti-ISIS operations. Still, the terrorist group effectively used mines and IEDs to regularly harass patrolling security forces. Furthermore, ISIS was able, as it did in April, to successfully create a fake checkpoint on the Palmyra-Deir Ez Zor highway, resulting in the death of at least four soldiers and one civilian. The creation of fake checkpoints—in which ISIS militants use stolen regime uniforms and flags to prey on passing cars—demonstrates a high degree of operational freedom of the groups various cells.

May also marked the first month of sustained ISIS activity in east Hama and Raqqa. ISIS attacks and mines killed more than seven pro-regime fighters in six separate attacks. Among those killed was a commander of Iran’s Islamic Revolutionary Guard Corps (IRGC), whose vehicle was struck by an IED as it drove near Ithriya, Hama. These attacks coincided with two new anti-ISIS operations by pro-regime forces in the governorates.

On May 11, the pro-regime Liwa al-Quds militia launched an operation in Raqqa with the backing of the Syrian Air Force. This is the first known counter-insurgency operation in central Syria to be accompanied by sustained aerial support. This development likely occurred due to the opening of the Tabqa-Raqqa crossing, connecting the Syrian Democratic Forces (SDF)-held and regime-held parts of Raqqa governorate. The crossing opened on the same day the Liwa al-Quds operation began. Liwa al-Quds continues its operation in the Raqqa and east Hama deserts as of the end of May. It recovered some buried mines and IEDs and destroyed several ISIS vehicles. However, it is unclear whether any ISIS fighters were killed.

On May 26, fighters from the National Defense Forces (NDF) in the Christian towns of Suqaylabiyah and Mahardeh began patrolling the east Hama countryside, their second such deployment in as many months. These two towns have a very close relationship with the Russian military, with the militias’ commander having met with the highest-ranking Russian officer in Syria multiple times in April and May. Pictures of NDF fighters during their most recent operations show them using brand new vehicles and outfitted with new Russian equipment. However, this operation, much like the previous one, was mostly carried out for publicity, with the fighters deployed for only five days and engaging no ISIS targets.

May appears to have set the stage for an even more violent June. While regime anti-ISIS patrols will likely continue at the same pace or increase in frequency, they have produced little in terms of meaningfully degrading ISIS capabilities. Meanwhile, Syria continues to devote more resources to the ongoing insurgency by ex-rebels in Syria’s southern Dara’a province while its core offensive units remain near Idlib in the northwest, likely awaiting orders to resume the regime’s offensive on the rebel stronghold. 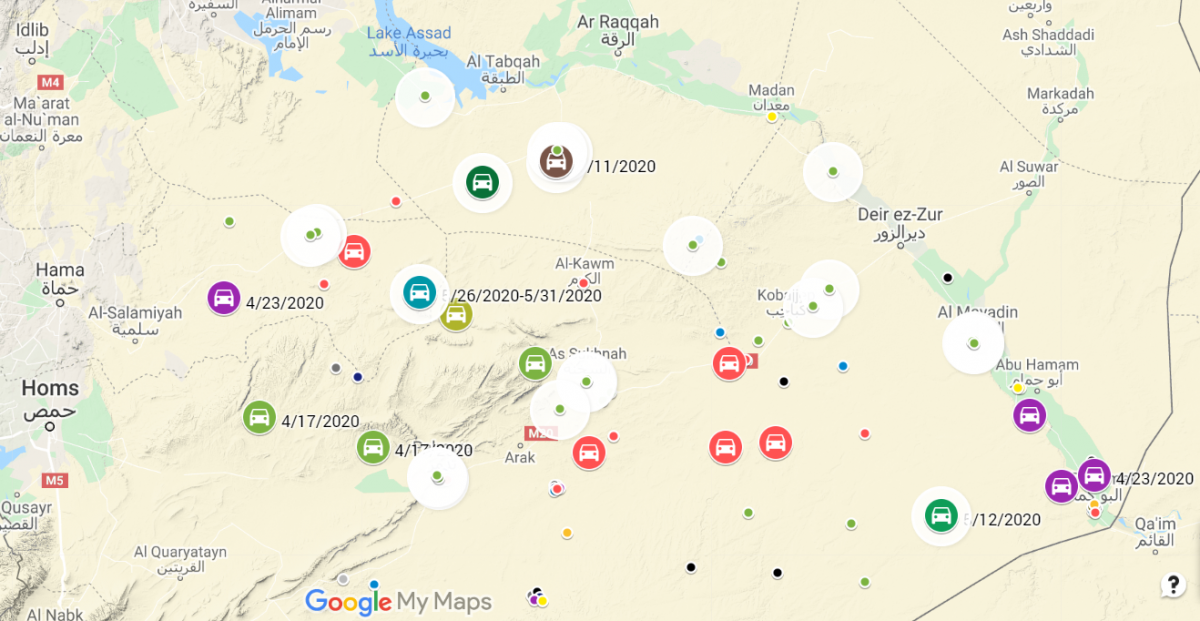 Map of locatable ISIS attacks (highlighted dots) and reported anti-ISIS operations (highlighted cars, color-coded by the date the operation began) in May. To view an interactive version of this map, please click here.