ISIS militants carried out at least 30 confirmed attacks in November, killing at least 58 pro-Assad regime fighters and 17 civilians as well as wounding at least 29 soldiers and civilians in the Homs, Deir Ez Zor, Raqqa, Hama, and Aleppo governorates. While the overall number of attacks matched the number carried out in October, November saw the highest number of high quality* attacks and the second highest number of confirmed casualties since the insurgency began.

As we predicted last month, ISIS continued to pressure east Hama. The group conducted eight attacks, the highest number yet of attacks in a month in the province. Of those, three were high quality. Overall, ISIS continued last month’s concentration on Homs, where it conducted 13 attacks, of which seven were high quality. Attacks in Deir Ez Zor (six) and Raqqa (two) continued to drop off, following a pattern that began in October.

The sharp drop in attacks in Raqqa noted during the second half of October continued in November, correlating with a significant increase in violence in northeast Hama. The patterns in fighting in south Raqqa and northeast Hama—e.g., along the highway running from Resafa, Raqqa to Ithriya, Hama—suggests that a handful of separate ISIS cells operate across this area. Thus, a reduction of attacks in south Raqqa and an increase in attacks in northeast Hama implies the movement of fighting groups from one governorate to the other.

ISIS carried out three major attacks in northeast Hama in November. On November 11, ISIS fighters overran an Assad regime outpost near the Abu Fayyadh Dam, just outside Ithriya, killing at least 15 soldiers. Two days later, militants set up two fake checkpoints along the highway, killing several civilian drivers. On November 23, ISIS attacked a regime checkpoint along the Ithriya-Sukhnah road, killing at least three personnel. The attack occurred at night, implying the use of thermal or night vision equipment by the militants. ISIS carried out three other attacks during the month in the Ithriya-Rahjan area, as well as two attacks in the southeast part of the province. 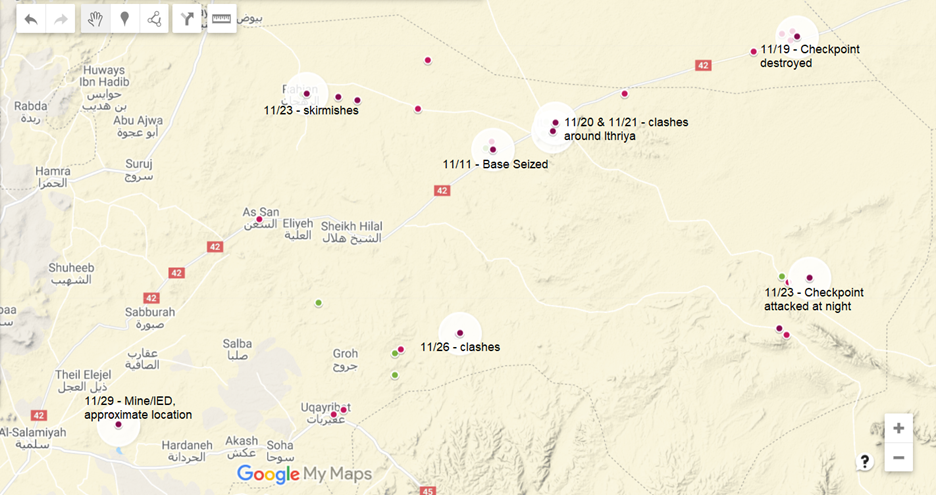 Map of ISIS attacks in Hama in November (highlighted dots).

Despite the continued escalation in east Hama, Homs was the center of ISIS activity in November. More than half of all ISIS attacks in the province this month were high quality. In all, the group killed at least 32 soldiers and 13 civilians. On November 1 and 2, ISIS fighters disguised as soldiers preyed on civilians in the remote village of Roud al-Wahsh, killing at least three and wounding seven at fake checkpoints. The group set up a third fake checkpoint near Sukhnah on November 2, killing at least two pro-regime Liwa al-Quds fighters. ISIS again targeted local civilians on November 15, when militants attacked a group of shepherds, killing 10 and burning down their camp.

ISIS conducted two of its most significant attacks in the province on November 24 and 25. ISIS first overran a large Syrian Arab Army (SAA) outpost, killing five and capturing one, near Wadi Qasr Halabat before moving northeast to Palmyra the following day, where they attacked a joint PMC Wagner (Russian paramilitary organization) and SAA position west of the city. Both of these attacks occurred in a region of Homs that has previously witnessed little or no ISIS activity, yet now appears to have a large ISIS cell roaming freely between SAA positions. Lastly, ISIS claimed to have killed 20 SAA soldiers and destroyed two tanks west of Sukhnah on November 28. This claim is almost certainly an exaggeration of the fighting that took place that day. An attack of that nature would be unprecedented, not to mention the SAA does not deploy its limited number of tanks outside the city. According to a trusted loyalist fighter, ISIS instead killed four soldiers, wounded two, and captured a regime truck during several hours of fighting that day. 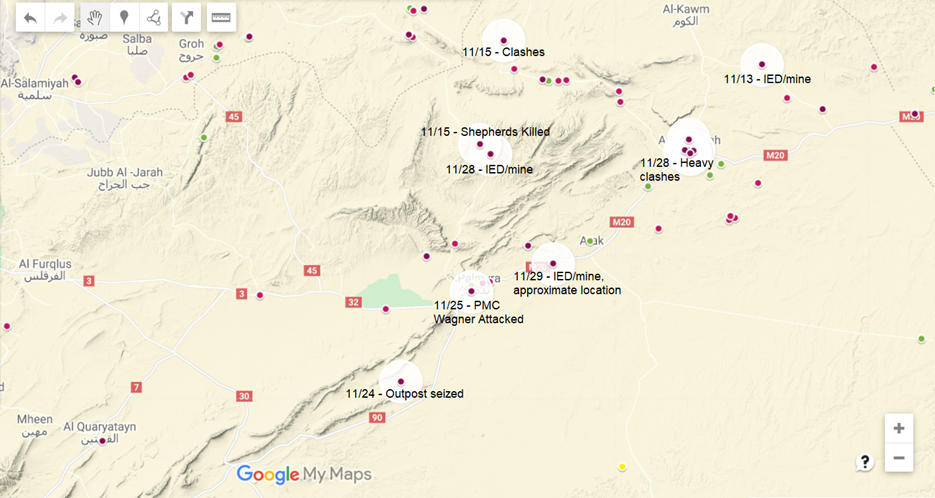 Map of ISIS attacks in Homs in November (highlighted dots).

ISIS also assassinated a regime commander for the 10th month in a row. On November 18, ISIS fighters ambushed Brigadier General Bashir Ismail and nine others as the men came to investigate an “abandoned” ISIS camp near Faydat Ibn Muwayna in southern Deir Ez Zor. Ismail commanded the local 17th Division’s 137th Regiment and was, according to one National Defense Forces (NDF) fighter, widely hated. It is believed the general was set up by Mohammed Assef, the recently appointed commander of the Mayadeen NDF, as part of the ongoing power struggle between the NDF and the 17th Division. The aforementioned NDF fighter suggested Assef was able to act without fear of retaliation due to the fact that the SAA high command held Ismail in low regard.

November’s attacks continued the trend of geographic expansion. ISIS appears to have embedded itself in northeast Hama, launching repeated high quality attacks around Ithriya and regularly harassing regime forces near Rahjan, a village once viewed as deep within loyalist territory. The November 24 and 25 attacks west of Palmyra suggest that the October 2 attack near Qaryatayn was not an isolated incident, but that ISIS has decided to relocate or activate a large cell in the mountains southwest of Palmyra. The impact of the large anti-ISIS operation around Ithriya, launched on November 27, remains to be seen, while the regime continues to ignore the consistent, intense fighting around Palmyra and Sukhnah.

December will likely witness the same trends present in November. It remains doubtful that the number of total attacks will surpass those of August and September. However, as in November, high quality attacks can be expected to continue to constitute a higher percentage of overall attacks. Significant attacks in Homs, particularly around Palmyra, will continue as long as the regime ignores the area. Depending on the longevity of the regime’s northeast Hama operation, ISIS will either continue to conduct attacks here at a high frequency or shift its focus back to south Raqqa. 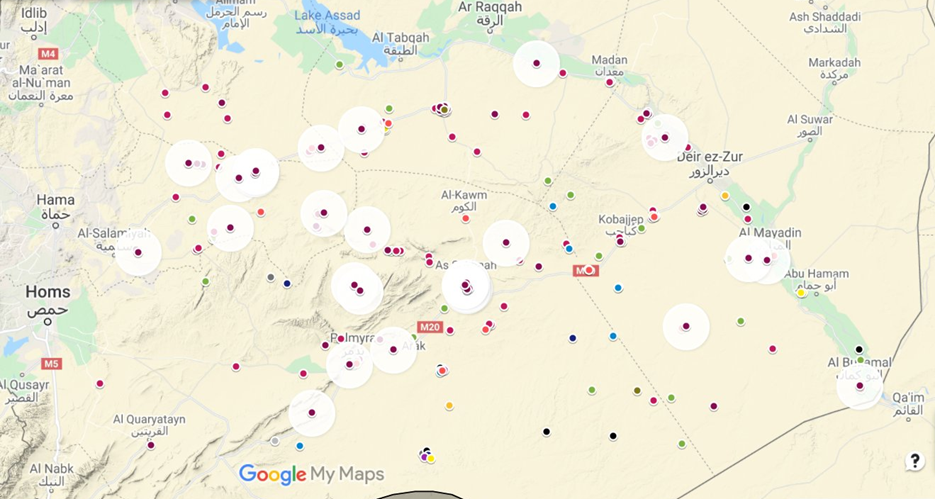 Map of locatable ISIS attacks (highlighted dots) in November. To view an interactive version of this map, please click here.