Following is the December installment of “ISIS Redux: The Central Syria Insurgency,” a monthly chronicle of attacks by the terrorist group ISIS in central Syria. Previous editions of ISIS Redux can be viewed through the following links: November, October, September, August, July, June, May, and April. A full background and analysis of ISIS’s resurgence in Syria, including its methodology, can be explored here and here.

ISIS militants carried out at least 33 confirmed attacks in December, killing at least 56 pro-Assad regime fighters and wounding at least 57 in the Homs, Deir Ez Zor, Raqqa, Hama, and Aleppo governorates. While there was a slight increase in the overall number of attacks compared to November, December saw a significant drop in high quality* attacks, ending a four-month streak of double-digit high quality attacks.

November concluded with the Assad regime carrying out widespread anti-ISIS operations in northeast Hama, a reaction to the consistent high quality attacks in the area that month. These operations appeared to have little or no effect on the group, as attacks continued in the province at an even greater pace in December. Indeed, December was the first month in which more attacks occurred in Hama (10) than in any other governorate. Attacks in Homs (5) dropped sharply, but remained focused on both Palmyra (2) and Sukhnah (2). Meanwhile both Raqqa (8) and Deir Ez Zor (8) saw increases in ISIS activity, reversing a downward trend that began in October, with nearly half of the attacks in the latter province being high quality.

Last month, we noted that attack patterns appeared to show a connection between the ISIS cells operating in northeast Hama and Raqqa, particularly its southwest region. Despite an increase in both Raqqa and Hama attacks in December, this geographic pattern remained consistent as the increased attacks in Raqqa occurred almost exclusively in the southeast section of the province. Thus, it seems we can roughly define two groups of cells in the area, one operating in southeast Raqqa (and likely northeast Homs), and the other group operating from southwest Raqqa to northeast Hama. 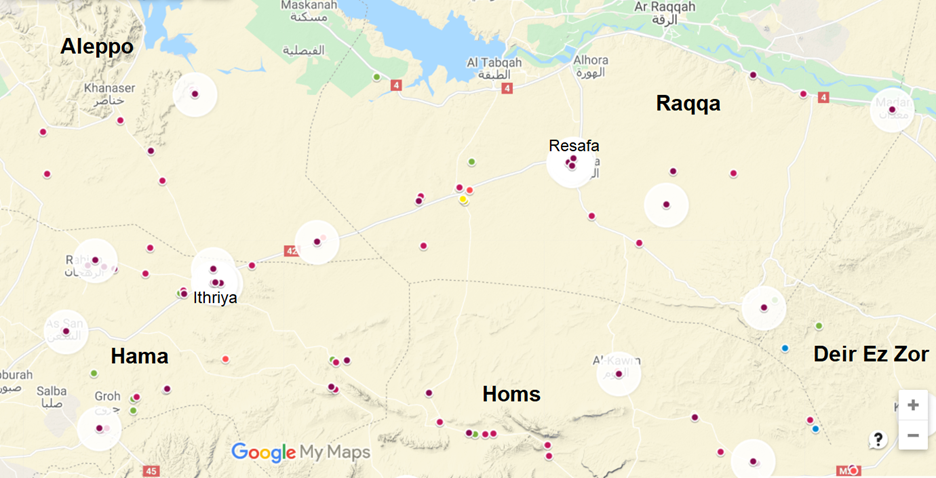 ISIS carried out seven high quality attacks in December, the fewest since July. The lack of important attacks during the first half of the month was likely due to ongoing regime sweeps in Hama, Raqqa, and Deir Ez Zor. However, on December 12 an Improvised Explosive Device (IED) killed seven soldiers on the highway outside Maadan, Raqqa. It was the deadliest attack of the year in southeast Raqqa. Two days later, fighting erupted outside Rahjan, northeast Hama. ISIS claims the clashes were triggered when its fighters repelled a regime patrol that entered an ISIS-held village in the area. Fighting then raged across the area for two more days, with at least 28 soldiers wounded by the end. There is no evidence that ISIS lost any fighters in the battle. At the end of the third day, pro-regime forces declared a string of hamlets east of Rahjan “secured.” This was the second multi-day battle around Rahjan in as many months.

On December 27, ISIS killed a Republican Guard colonel near Boukamal, Deir Ez Zor. The colonel was the 24th commander killed in the Badia (Syrian desert) this year. His death marks the 11th month in a row that ISIS militants have successfully killed a pro-regime officer. Three days later, ISIS used IEDs and heavy machine guns to ambush three buses carrying members of the 4th Division’s Security Office along the Deir Ez Zor-Palmyra highway. The militants completely destroyed one bus, killing at least 30 soldiers and wounding 17. The attack occurred in the middle of the night, and ISIS reportedly waited nearby for the arrival of regime reinforcements before launching a second attack, which resulted in additional casualties.

This final major attack of 2020 came just one week after ISIS launched similar attacks on vehicles in the same part of the highway. Just two days earlier, on December 28, the commanders of the Deir Ez Zor National Defense Forces (NDF), the 104th Republican Guard Brigade, and the Syrian Arab Army’s (SAA) 17th Division had toured this area in a show of force. While this media tour ultimately changed nothing on the ground, it did reveal an important development in the SAA-NDF relationship in the governorate.

In November, the SAA-NDF power struggle came to a head when ISIS killed 17th Division regiment commander, likely operating on intelligence passed to the group by the local NDF commander. However, in early December, the 17th Division’s Chief of Staff was promoted to commander, and he quickly initiated a serious of meetings with the long spurned local tribal leaders and heads of other regime security forces. The December 28 battlefield tour was the first time in more than a year that both the head of the Deir Ez Zor NDF and the head of Deir Ez Zor’s most important SAA unit, the 17th Division, were pictured together outside of a ceremony.

The continued rebuilding of this relationship, and the broader work unifying the disparate pro-regime military units in the governorate, remains crucial for any attempts to reverse ISIS gains here. While the joint NDF-SAA sweeps conducted after the December 30 attack are a positive development, such tactics remain ineffective at rooting out ISIS cells. As long as the regime is unable to find a more effective counter-insurgency strategy, ISIS will continue to move about freely, harassing patrols and conducting high quality attacks wherever it finds vulnerabilities—of which there are many.

January will surely see continued pressure in east Hama, as ISIS appears to have demonstrated that no level of regime presence in the region will prevent it from carrying out attacks. The boldness of the late December attacks along the Deir Ez Zor-Palmyra highway may indicate that ISIS is renewing an old strategy of pressuring key transit lines. If this is the case, we can also expect to see attacks in January occur along the M20 and the Salamiyah-Resafa highway. The trend of the past five months suggests there will be about 30 attacks in January, with the number of high quality attacks contingent on the extent of the regime’s commitment to launching widespread and sustained sweeps. 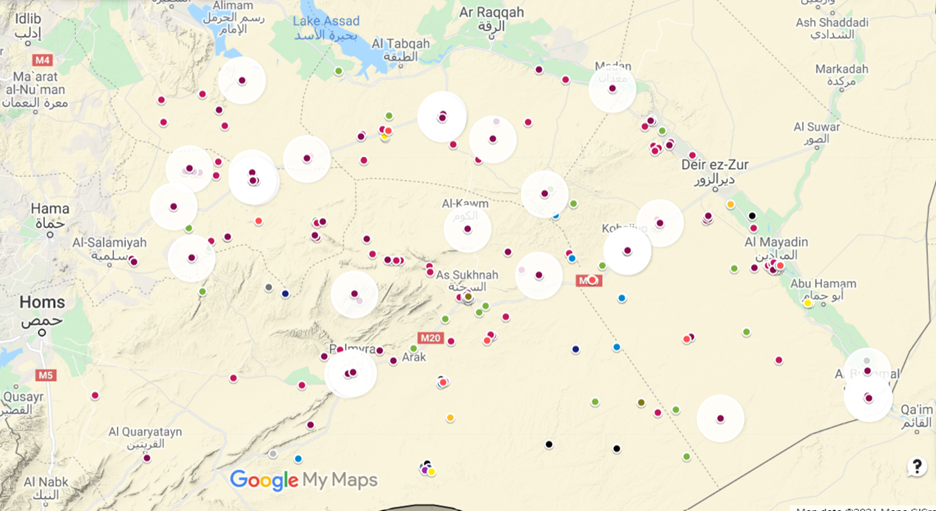 Map of locatable ISIS attacks (highlighted dots) in December. To view an interactive version of this map, please click here.

SENTENCING: “El Shafee Elsheikh, 34, faces a mandatory sentence of life in prison after being convicted in Alexandr… https://t.co/sZLkK9zAQ3