Following is the January 2021 installment of “ISIS Redux: The Central Syria Insurgency,” a monthly chronicle of attacks by the terrorist group ISIS in central Syria. Previous editions of ISIS Redux can be viewed through the following links: December, November, October, September, August, July, June, May, and April. A full background and analysis of ISIS’s resurgence in Syria, including its methodology, can be explored here and here.

ISIS militants carried out at least 46 confirmed attacks in January, killing at least 55 pro-Assad regime fighters, 26 civilians, and one local political leader, while wounding at least 22 in the Homs, Deir Ez Zor, Raqqa, Hama, and Aleppo governorates. January witnessed a significant increase in the number of ISIS attacks, high quality* attacks, and confirmed deaths compared with previous months. They were in fact the highest of all three metrics since the start of the insurgency two years ago.

Fighting in Homs and Deir Ez Zor provinces increased sharply, with ISIS carrying out 18 and 13 attacks, respectively. Attacks in east Hama (7) dropped slightly compared to December, largely due to an apparent pause in attacks there since January 18. Attacks in Raqqa (5) province were also down, though attacks here were evenly spread throughout the month. Aleppo (3) continues to be the least active region of the insurgency, although ISIS conducted two attacks in the Andarin area north of Rahjan for the first time in January, indicating a possible northward expansion from the east Hama town.

The jump in reported attacks in Homs was largely due to a significant increase in fighting around the city of Sukhnah. ISIS claimed to have conducted three attacks near Sukhnah on both January 20 and January 26, marking the most intense periods of fighting around the town since November. 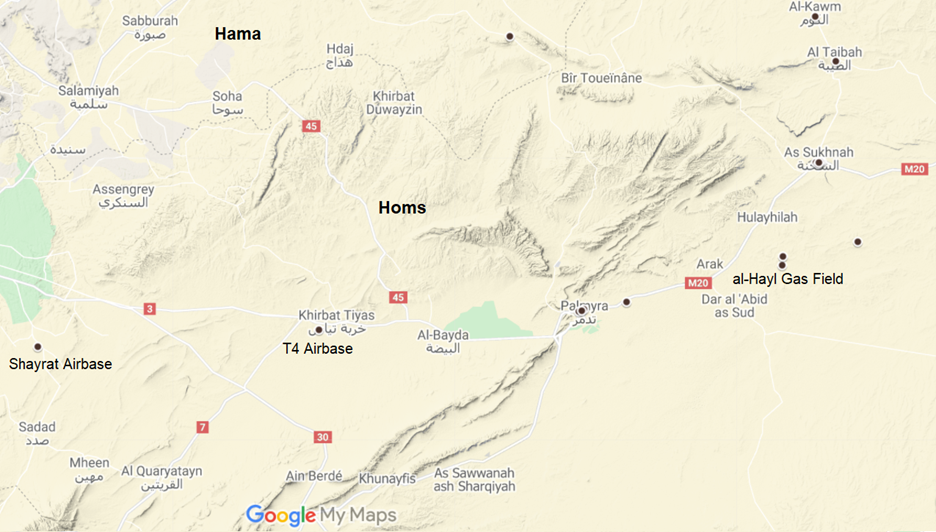 Most of the attacks in Deir Ez Zor were in response to an ongoing regime operation north of Shoula. Syrian Arab Army (SAA) and local Syrian and foreign militias launched this operation following the December 30 ISIS attack on troop transports nearby that left 31 soldiers dead. For the entire month of January, ISIS and pro-regime forces clashed north of Shoula and nearby Kababbj, marking the most sustained fighting between them since the insurgency began. ISIS’s response to the regime operation has involved both high and low quality attacks. ISIS carried out at least one complex ambush that killed six Islamic Revolutionary Guard Corps (IRGC)-backed foreign fighters. The regime also sustained losses due to ISIS mines and harassment fire on its patrols.

Historically, ISIS cells have proven more fluid in the face of regime sweeps, harassing patrols while temporarily moving out of the area. ISIS’s apparent refusal to give up its positions on the northern side of the crucial Palmyra-Deir Ez Zor highway mark an important evolution in the group’s strategy. This change appears to indicate that ISIS is both more prepared for head-on battles with regime forces now, and that the group is placing increasing importance on the ability to impede regime movement along the M20 Highway. Indeed, on January 24, an ISIS cell attacked a convoy of two to three buses carrying Syrian Republican Guard fighters just five miles west of Deir Ez Zor city and three and a half miles south of the SAA’s 137th Brigade base.

Unlike the December 30 attack, when the militants used pre-placed Improvised Explosive Devices (IED) or mines to attack the buses, this time ISIS moved in on trucks in the middle of the day, firing on the buses with small and heavy arms. The fact that this attack occurred so close to heavily fortified regime areas and in the midst of a large-scale anti-ISIS campaign demonstrates the apparent confidence cells have on their ability to move freely about the area. Three days later, regime forces scored their first victories against ISIS in the area, destroying an ISIS truck and killing three militants on January 27, and killing two militants and uncovering a hideout on January 28. Despite this, the operation and intermittent clashes continue along the Shoula-Kababbj corridor. 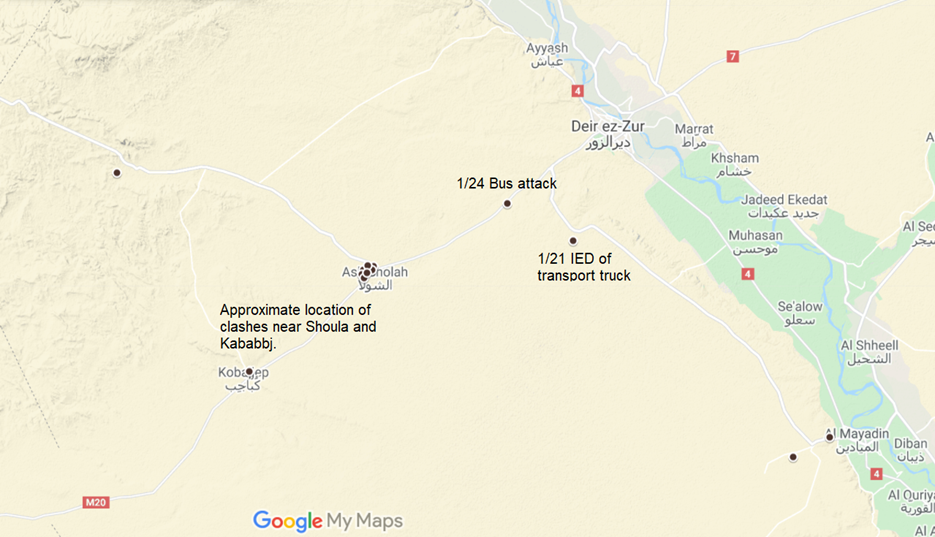 ISIS activity in Hama was carried out at the same intense pace for the first half of January as it had been in December. On January 3, insurgents cut the Salamiyah-Ithriya highway less than seven miles west of Ithriya, ambushing a convoy of oil tankers, lorries, and an overnight bus. ISIS destroyed the nine oil tankers and one of two lorries, killing seven civilians and two soldiers. Loyalist media claimed the militants were attempting a mass kidnapping, but were stopped by the arrival of security forces. Shortly after the first attack, ISIS fighters hidden nearby attacked the first responders, forcing emergency vehicles to retreat until additional security forces cleared the area.

These attackers likely came from north of the highway, where ISIS cells appear to have embedded themselves. These cells have regularly attacked regime forces around the town of Rahjan in past months, and did so again on January 8. Farther north, regime forces were twice attacked when attempting to patrol in the Andarin area of Aleppo, close to the Hama border. The regime has long been absent from this area, and it is likely that northeast Hama cells have an established presence here.

ISIS also continued attacking regime forces along the Ithriya-Raqqa highway, targeting soldiers at the Zakia junction in Aleppo on January 22, and clashing with pro-regime fighters in southwest Raqqa on January 25. Further east, ISIS fighters launched a large attack on Resafa on January 1 and successfully captured three soldiers somewhere in the province on January 11. The next day, militants massacred 18 shepherds near Sabkhawi, the same hamlet tribal forces had liberated on August 29, 2020. This massacre was followed by regime airstrikes on multiple locations in southeast Raqqa. 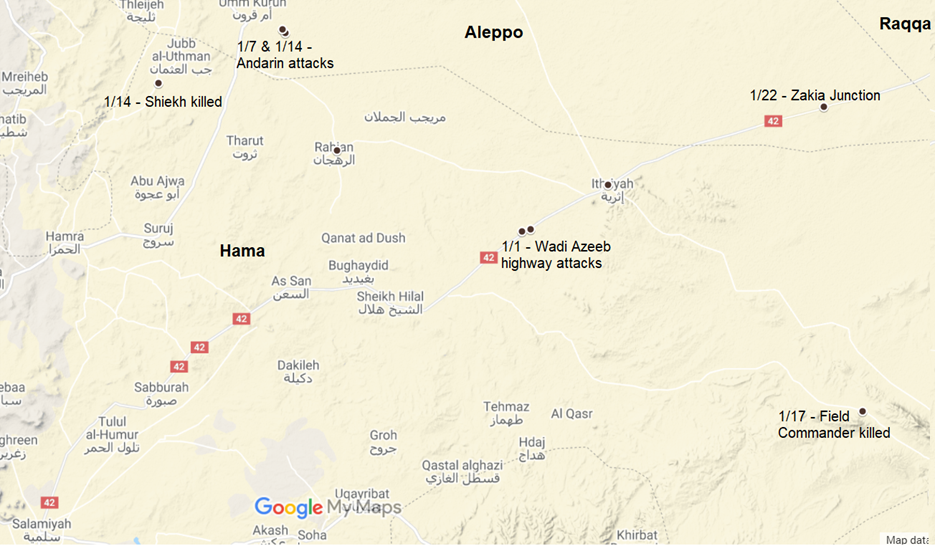 On January 9, ISIS killed an IRGC 2nd Brigadier General in Deir Ez Zor. The general had reportedly been touring Liwa Fatemayoun positions in the days prior to his death, suggesting that he was either killed in the fighting near Shoula, or somewhere near Bukamal. He was the 25th commander killed in the Badia (Syrian desert) since January 2020, and his death marks the 14th month in a row that ISIS militants have successfully killed a pro-regime officer.

Five days later, ISIS assassinated a local Sheikh in northeast Hama. According to loyalists, the Sheikh has played a major role in arresting many local ISIS sympathizers, making him a prime target for insurgents. It was the first confirmed killing of a civil society leader in the Badia since the ISIS insurgency began, and hints strongly at heavy local support for ISIS in the volatile northeast Hama region. On January 17, ISIS killed its third regime commander of the month, destroying the vehicle of a National Defense Forces (NDF) field commander with a mine in southeast Hama.

For their part, the Syrian regime and its allies conducted three main operations in January. The first, as previously described, was launched north of Shoula and was ongoing through the end of the month. The second operation was launched following the January 3 ISIS highway attack in east Hama, and was said to span from Ithriyah to Resafa. The third operation was conducted from Palmyra to the T2 Pumping Station, on the Homs-Deir Ez Zor border. This operation ended on January 28, and, according to local loyalists, “cleared” four hamlets north of the Palmyra-T2 road. There were no claims of this operation encountering any ISIS fighters.

In addition to these operations, there was increased activity by Syrian and Russian jets in central Syria. Airstrikes were conducted regularly throughout the month, both in support of the operations and in response to ISIS attacks in Raqqa and Homs. As always, there is no evidence of the impact of these strikes, although the regime continues to largely hit pre-selected locations, leaving little chance for the strikes to have any material impact on ISIS operations.

Since many of ISIS’s January’s attacks were a reaction to sustained regime operations, February’s fate will likely be determined by what the regime chooses to do. If regime operations around Shoula and Sukhnah end, attacks will likely drop back to the late 2020 levels. ISIS activity is certain to return to east Hama, with the cells there leveraging their local intelligence-gathering to hit high value targets. Meanwhile, with both the Salamiyah-Raqqa and Palmyra-Deir Ez Zor highways under constant ISIS pressure during the past two months, the likelihood that militants again ambush civilian or military vehicles in February remains high. 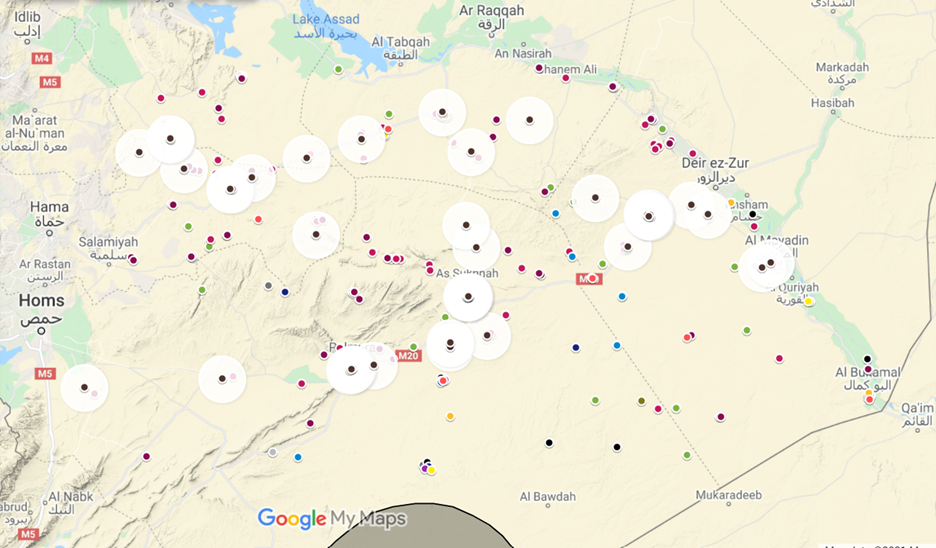 Map of locatable ISIS attacks (highlighted dots) in January 2021. To view an interactive version of this map, please click here.