Following is the February 2021 installment of “ISIS Redux: The Central Syria Insurgency,” a monthly chronicle of attacks by the terrorist group ISIS in central Syria. Previous editions of ISIS Redux can be viewed through the following links: January,  December, November, October, September, August, July, June, May, and April. A full background and analysis of ISIS’s resurgence in Syria, including its methodology, can be explored here, here and here.

ISIS militants carried out at least 29 confirmed attacks in February, killing at least 36 pro-Assad regime fighters and 12 civilians, while wounding at least 35 in the Homs, Deir Ez Zor, Raqqa, Hama, and Aleppo governorates. February saw a sharp drop in the number of ISIS attacks, high quality* attacks, and confirmed deaths compared with January. However, statistically, ISIS activity for February was consistent with the escalated level of activity that began in fall 2020.

Attacks in Homs (8) and Deir Ez Zor (5) provinces decreased sharply compared to a month ago, while ISIS activity continued to grow in eastern Hama (14) after a brief pause during the second half of January. Meanwhile, confirmed attacks in Raqqa (1) and Aleppo (1) provinces seemed to fall to their lowest levels in several months. However, this could also be partially due to worsening reporting conditions that made it more difficult to get accurate information on the situation in these areas.

The most significant fighting in Homs occurred on February 3, when ISIS fighters conducted a night-time raid on a regime base near the Tuwaynan oil fields. ISIS attackers killed 12 members of a pro-regime militia and wounded 15 more, while burning vehicles and barracks. According to one source, this military installation is sometimes manned by members of the Russian paramilitary group PMC Wagner, possibly indicating that these foreign fighters were the intended targets of the attack.

As in January, ISIS attacks in Homs were concentrated around the Palmyra-Sukhnah corridor. However, another attack was carried out on the outskirts of Qaryatayn, close to the Damascus provincial border. This was the second ISIS attack close to Qaryatayn in the past four months. ISIS cells also carried out another small raid on vehicles traveling along the Palmyra-Deir Ez Zor highway on February 10, destroying at least one oil tanker. This attack came despite continued Syrian Arab Army (SAA) operations to secure the highway. 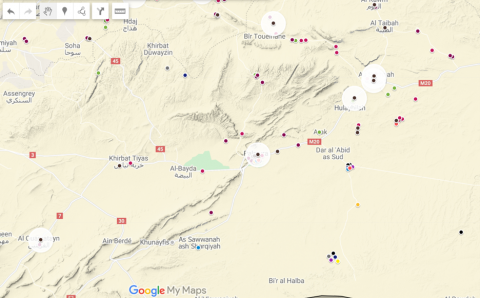 Map of ISIS attacks in Homs in February 2021 (highlighted dots).

The significant drop in confirmed ISIS attacks in Deir Ez Zor province can be directly attributed to widespread regime operations conducted throughout the majority of February. Regime forces, assisted by Islamic Revolutionary Guard Corps (IRGC)-commanded Afghan foreign fighters, successfully pushed ISIS out of the Shoula area on February 25, concluding a two-month battle on the northern side of the highway. Regime forces uncovered at least one ISIS hideout, though there was no evidence of ISIS deaths in the area this month. Further south, pro-regime tribesmen from Usoud Sharqiyah Shaytat spent the month sweeping areas west and south of Mayadeen. These units did not claim the killing of any ISIS fighters or the discovery of any hideouts during their operations.

With the intense operations in northwest Deir Ez Zor, ISIS activity was concentrated around Mayadeen this month. On February 5, four regime fighters were killed during an attack on their positions just southwest of the city. On February 20, ISIS fighters successfully infiltrated the urban belt south of Mayadeen, killing four militiamen at their checkpoint at a river crossing in the village of Ghariba. This was the first confirmed successful ISIS attack inside an urban center in southwest Deir Ez Zor since the start of the insurgency.

Meanwhile, ISIS fighters ambushed the patrolling Usoud Sharqiyah Shaytat fighters at least once in the desert southwest of Mayadeen, killing three men, including a field commander. Finally, the body of a 4th Division soldier was found on the outskirts of Mayadeen on February 24, presumably kidnapped and then executed in a manner consistent with the ongoing insurgency in Dara’a province. This death further implies that ISIS cells are deepening their presence in the urban area around Mayadeen city.

ISIS activity in Hama increased sharply in February following a slowdown during the second half of January. However, all of ISIS’s activity was passive, involving mines or Improvised Explosive Devices (IED), and directed indiscriminately towards civilians and soldiers alike. Of the 14 attributed ISIS attacks in east Hama, five of them hit civilians. 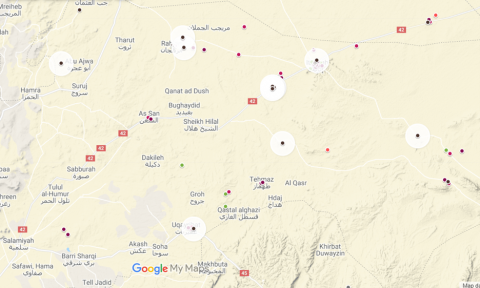 Map of ISIS attacks in Hama in February 2021 (highlighted dots).

As noted, the Syrian regime and its allies conducted several lengthy anti-ISIS operations in Homs (Jabal Amor) and Deir Ez Zor (Shoula and southwest Badia) during February. Such operations forced ISIS cells to either bed down or move to new areas, causing a drop in overall attacks and an increase in mine and IED hits. The Syrian regime also sent significant numbers of reinforcements to strategic points in the two governorates after the February 3 Tuwaynan attack, further limiting ISIS activity. However, ISIS activity steadily rose again by the second half of the month.

The regime’s current main objective is to secure the major highways that run through the Badia (Syrian desert), connecting western and northeast Syria. The operations around Shoula appear to have succeeded, at least for now. Still, ISIS was able to attack oil tankers twice, once on the Palmyra-Sukhnah road on February 10, and again near Resafa, Raqqa on February 16, when they also managed to kidnap the three men guarding the tanker.

It should be noted that February and March 2020 were “down months” for the insurgency, the time when ISIS activity dropped significantly before a small surge in the spring and the larger surge in August. It can be expected that ISIS activity will similarly remain depressed in March, with the group focusing on mines and IEDs, targeting vulnerable civilian populations, and conducting a handful of small arms attacks against regime forces. It is significant, however, that in this decreased period of activity, ISIS has still conducted more attacks than during the spring 2020 surge, and more than twice the number of attacks and high quality attacks compared with February 2019 and February 2020. 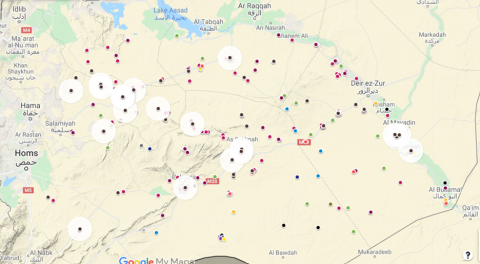 Map of locatable ISIS attacks (highlighted dots) in February 2021. This map does not include seven attacks which did not have specific locations attributed to them: one "east Hama" IED, two "east Homs" clashes, three "Salamiyah countryside" IEDs, and one southwest Deir Ez Zor attack. To view an interactive version of this map, please click here.