(New York, N.Y.) – The Counter Extremism Project (CEP) reports weekly on the methods used by extremists to exploit the Internet and social media platforms to recruit followers and incite violence.

Last week, ISIS released a new propaganda video titled “And Strike Their Necks” on Telegram and subsequently distributed it widely across the RocketChat and Hoop platforms. In addition, multiple white supremacist and neo-Nazi groups celebrated the killing of Ahmaud Arbery on Telegram – as well as on 4chan and 8chan successor websites – and urged followers to incite further violence towards African Americans, with one white supremacist accelerationist Telegram channel directly encouraging more mass shootings. Also, another white supremacist accelerationist Telegram channel dedicated to COVID-19 news urged followers to escalate fear mongering about children being infected with the virus and praised the suspected forthcoming economic collapse.

Meanwhile, CEP researchers located a nine-image ISIS propaganda photo set on Instagram uploaded from the group’s self-proclaimed East Asia province in the Philippines and found two pro-ISIS websites that use Cloudflare services and the WordPress platform. Additionally, researchers located a video made by neo-Nazi James Mason, the author of Siege, in which he characterized Adolf Hitler as a “savior sent by God” and asserted that the media, government and society were the true accelerationists, not white supremacists. Finally, a Finnish Siege-inspired neo-Nazi group, National Socialist Youth (NSY), was advertised in a Telegram chat.

On Friday, May 15, ISIS released a new video from their self-proclaimed province in Iraq titled “And Strike Their Necks.” The video, approximately 50 minutes long, showed bombings conducted against Iraqi security forces, combat, and multiple executions of individuals ISIS claimed worked for the Iraqi government.

A white supremacist accelerationist Telegram channel directly encouraged mass shootings on May 12. The channel posted that the only two acceptable options in life were living in isolation off the grid, or committing an act of terrorism. The channel encouraged brutality in order to “win” and used the term “saints,” which is used to praise white supremacist terrorists such as Timothy McVeigh, Anders Breivik, and Brenton Tarrant. On May 14, the channel had over 3,300 subscribers, and the message had been viewed over 650 times. The channel has previously encouraged terrorism and other acts of violence.

On May 14, a white supremacist accelerationist Telegram channel dedicated to COVID-19 news urged their 3,000 subscribers to spread news about children being infected with the virus, and praised the prospect of an economic depression. The channel stated that “Nobody cares that boomers were dying but this new information about kids dying has enormous potential to fan the flames of social unrest,” and urged their audience to push an accelerationist agenda. The same channel also stated the administrator’s hope that economic depression and hunger would radicalize people to take violent action against Jews and the U.S. government.

CEP researchers located an ISIS propaganda photoset on Instagram. The nine photos, from the group’s self-proclaimed East Asia province in the Philippines, showed ISIS fighters praying, eating, and engaging in patrols. The photoset had been on the platform for approximately 24 hours when it was located, and had over 110 likes. The account that uploaded the photoset has previously uploaded sections from ISIS propaganda videos in April and early May. 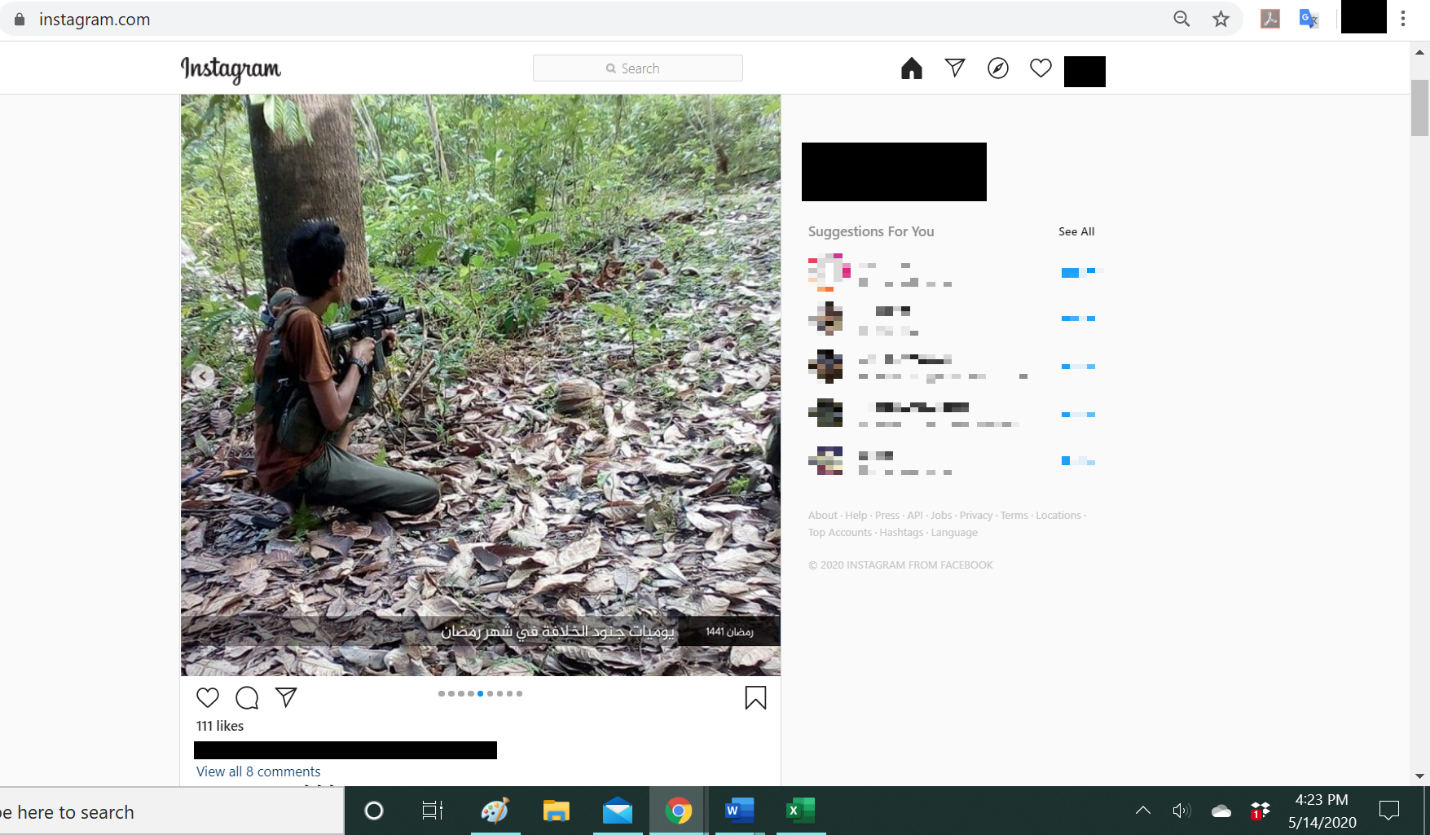 CEP researchers located two pro-ISIS websites the week of May 9 to May 15, one which uses Cloudflare services, and the other on the WordPress platform. The WordPress site contains ISIS’s weekly al-Naba newsletter, and was created in April.

The second website, on the .info domain, has previously been removed from the .xyz, .win, .in, and .ru domains. The website contains violent ISIS propaganda videos, weekly newsletters, and daily Amaq News updates. Videos on the website include recent ISIS releases, as well as notorious execution videos. The website, like it’s previous incarnations, uses Cloudflare services. While the domain suffix has changed, the name of the website has not.

CEP researchers located a video made by neo-Nazi James Mason, the author of Siege, in which he stated that the media, government, and society are the true accelerationists, and not white supremacists. Mason stated that whites have been chosen by God, and that modern government, society, and culture, are anti-white, and that the U.S. is following the path of ancient empires that lead them to failure. Mason also stated that Adolf Hitler was a savior sent by God and lamented on the takedowns of white supremacist websites. Mason predicted that regardless of any action, the system will collapse. In an attempt to offer practical advice, Mason warned his audience to beware of agent provocateurs and not to do anything illegal, but offered the caveat that if anyone were to commit an illegal act, that they should do it alone and in secrecy. The video was uploaded to a “free speech” streaming platform located in the United Kingdom.

Mason claimed that he opposed unlawful activities in a September 2019 podcast, contradicting his previous support for violence. Siege calls for violence against the U.S. government, and racial and religious groups, and has helped inspire the Atomwaffen Division (AWD) and The Base. In an affidavit in support of a criminal complaint for former AWD leader John Cameron Denton, the U.S. government alleged that Mason previously communicated with AWD members and offered them “encouragement in pursuing neo-Nazi activities and views.”

A new Finnish neo-Nazi group “National Socialist Youth,” (NSY) inspired by the book Siege was advertised in a Telegram chat on May 12. The group stated that they are looking to recruit members between the ages of 13 and 25 and that they are currently focused on networking and “activism”. Photos on the group’s website show the distribution of flyers, stickers, and a banner drop. Essays on the website claim the existence of a genocide against white people, anti-Semitic conspiracy theories, and content taken from the Nordic Resistance Movement. The group’s suggested reading list includes Siege, The Turner Diaries, Brenton Tarrant’s manifesto, works from the Iron March forum, and a pamphlet from Combat 18. NSY’s website uses the Icelandic/Finnish/Romanan/Seychelles company Flokinet as its name server, and Hostinger as its registrar.