(New York, N.Y.) – The Counter Extremism Project (CEP) reports weekly on the methods used by extremists to exploit the Internet and social media platforms to recruit followers and incite violence. This week, a suspect was arrested by New Zealand law enforcement for uploading an image on a Telegram channel dedicated to Brenton Tarrant that threatened worshipers at the the Al Noor Mosque in Christchurch, New Zealand. Also, CEP found three ISIS propaganda websites, including one on the Tumblr platform. Additionally, an ISIS video titled “Answering the Call #3”, which calls for Muslims in East Africa to join ISIS, was uploaded from the self-proclaimed province in Somalia and is still available on numerous media platforms.

On Sunday, March 1, a Ukrainian Telegram channel dedicated to Brenton Tarrant shared an image of an individual wearing a skull mask and sunglasses in a vehicle outside of the Al Noor Mosque in Christchurch, New Zealand. Islamophobic and racist text accompanying the photograph threatened the mosque’s attendees. Four days after the photo was posted on Telegram, it had been viewed over 4,200 times and was shared by at least five other channels. The one-year anniversary of the Christchurch terror attacks, in which a gunman livestreamed his murder of 51 people on Facebook after releasing an online manifesto, is on March 15.

“As we approach the one-year anniversary of the Christchurch terrorist attack, law enforcement officials and the public must be wary of groups and online communities that support the suspected gunman’s actions or share a similar ideology,” said CEP Researcher Joshua Fisher-Birch. “Thankfully, in this instance New Zealand authorities apprehended the suspect who threatened the Al Noor Mosque on Telegram. Increased online vigilance for groups and individuals threatening violence or terrorist acts are crucial in preventing another shooting.”

Sam Richard Scott Brittenden was arrested by New Zealand law enforcement officials in a raid connected to the Telegram photo. Brittenden was charged with failing to assist with a search warrant. The New Zealand news website Stuff reported that Brittenden was a member of the male only white supremacist group Action Zealandia (AZ). The New Zealand news website Newsroom reported that another member of Action Zealandia planned the creation of “terror cells.” On their website, AZ stated that the group did not endorse Brittenden’s actions, and that they do not support the use of violence. On their Twitter account, AZ called the Newsroom’s article an attempt to silence the group. In addition to a website, AZ maintains a Twitter, YouTube, and BitChute page as well as a Telegram account. They have also attempted to recruit on at least one chan imageboard. A Facebook account belonging to the group was either removed by the platform or the group itself. The group’s website uses Cloudflare as their name server and Epik as their registrar. At least one member of AZ uses the social media platform Gab. On their website, Action Zealandia claims to stand for “New Zealand European identity,” nationalism, ecological sustainability, self-improvement, and opposition to “demographic replacement.” Essays on the site promote an anti-immigration agenda, isolationism, and anti-Semitism.

The second website, on the .win domain, contains full length ISIS propaganda videos, news releases, and the group’s Al-Naba newspaper. Videos available on the site include recent ISIS releases, statements from the group’s leadership, as well as notorious execution videos, including the burning to death of Jordanian pilot Lt. Muath al-Kasasbeh, and the beheading of Alan Henning and others. The site uses Cloudflare as its name server, and Name Silo as its registrar. Information on the website’s host is obscured by Cloudflare. The website was created on December 17, 2019.

The third website, on the .cf domain, contains propaganda news reports, full length violent propaganda videos, and the group’s al-Naba newspaper. .Cf is the country code top level domain for the Central African Republic. It is unclear how long the .cf website has been online for.

On February 28, ISIS released a video titled “Answering the Call #3” from the group’s self-proclaimed Somalia province. The video calls for Muslims in East Africa to join the group, features ISIS fighters in Somalia, and shows a bombing and the executions of alleged members of Somali intelligence. The video also criticizes al-Qaeda aligned al-Shabaab.

The video was uploaded to at least nine websites in addition to Telegram and RocketChat: Amazon Drive, file.fm, mail.ru, Mediafire, the Internet Archive, mega.nz, Yadi.sk, the Microsoft One Drive, and Brightcove.net. Between two and six days after the video was released, it was still available on at least five websites in addition to Telegram and RocketChat: the Internet Archive, Mediafire, file.fm, mail.ru, and Yadi.sk. 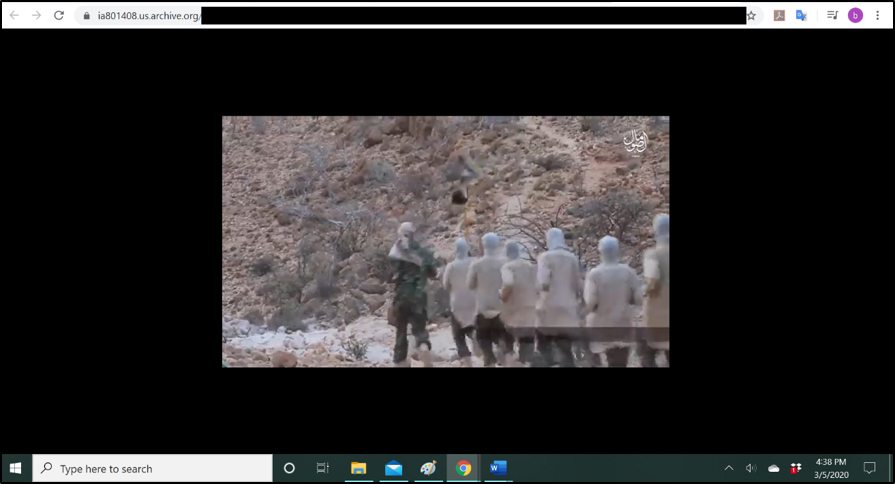 Many people do [believe] that it is a terrorist state, and who would possibly be a friend of Israel after you see the carnage that they carried out against Muslims in the West Bank and Gaza Strip and continue to do with the appropriation of properties? No one in their right and rational mind would support such a state [Israel].

RT @Reuters: The U.S. intelligence community has assessed that Islamic State in Afghanistan could have the capability to attack the United…

RT @jseldin: More info on Abdul Hamid al-Matar, the senior #alQaida #HurraslaDin leader killed in a US drone strike on Oct 22 "He was spec…

Kidnapped by Boko Haram and married to one of the group’s commanders. Why did Aisha Yerima return to the terror gro… https://t.co/v5Fe8xHYhs

In Edinburgh, a man accused of planning an attack on a Glenrothes mosque stands trial. The court heard that he alle… https://t.co/TvxpTFht3s