Additionally, a neo-Nazi accelerationist Telegram channel celebrated 5,500 subscribers by calling for mass shootings and other acts of violence to spread fear and terror, and users of a white supremacist chan imageboard on the dark web celebrated the alleged Norwegian mass shooter, Philip Manshaus, as his trial began last week. Finally, an anti-civilization neo-Nazi started a community board on an 8chan successor website.

The white supremacist street fighting gang Rise Above Movement (RAM) launched a Telegram channel on May 5. The channel features the group’s extreme right wing, anti-immigration, and anti-Semitic content, as well as a link to an article on a website affiliated with the group, which advises that all “activism” be committed while wearing masks to preserve the anonymity of its membership. The U.S. Department of Justice has stated that RAM members have previously “documented and promoted their white supremacy ideology through postings on various internet platforms.” The channel had over 250 members within two days of being created.

“RAM propaganda has also been previously found on YouTube and on Instagram – where it operated a clothing store that was taken down for being a hate organization only after it was flagged by a news organization,” said CEP researcher Joshua Fisher-Birch. “RAM’s move to Telegram will further their ability to coordinate real-world violence and spread white supremacist, anti-immigrant, and anti-Semitic bigotry. Based on their track record, Telegram should not allow them to operate on their platform.”

RAM is a group from southern California whose members have attacked counter-protestors in California and Charlottesville, Virginia. Some members have traveled to Europe to participate in far-right festivals and meet ups.

In July 2019, three RAM members were given prison sentences of 27, 33, and 37 months respectively, after pleading guilty to charges related to attacking counter-protestors in Charlottesville, Virginia in 2017. RAM’s founder, Robert Rundo served 20 months in a New York state prison for stabbing a rival gang member in 2009.

The Maldivian pro-ISIS Haqqu Media Center released a new video on May 2 glorifying a Maldivian ISIS fighter killed in Syria. The video praised the fighter for leaving the Maldives, engaging in social media propaganda work, and fighting. Five days after the video was uploaded it was still available on the Internet Archive and Mega.Nz. Recently released pro-ISIS propaganda has sought to appeal to people in the Maldives. CEP reported legacy pro-ISIS Maldivian blogs on the WordPress platform in mid-February, which were removed. 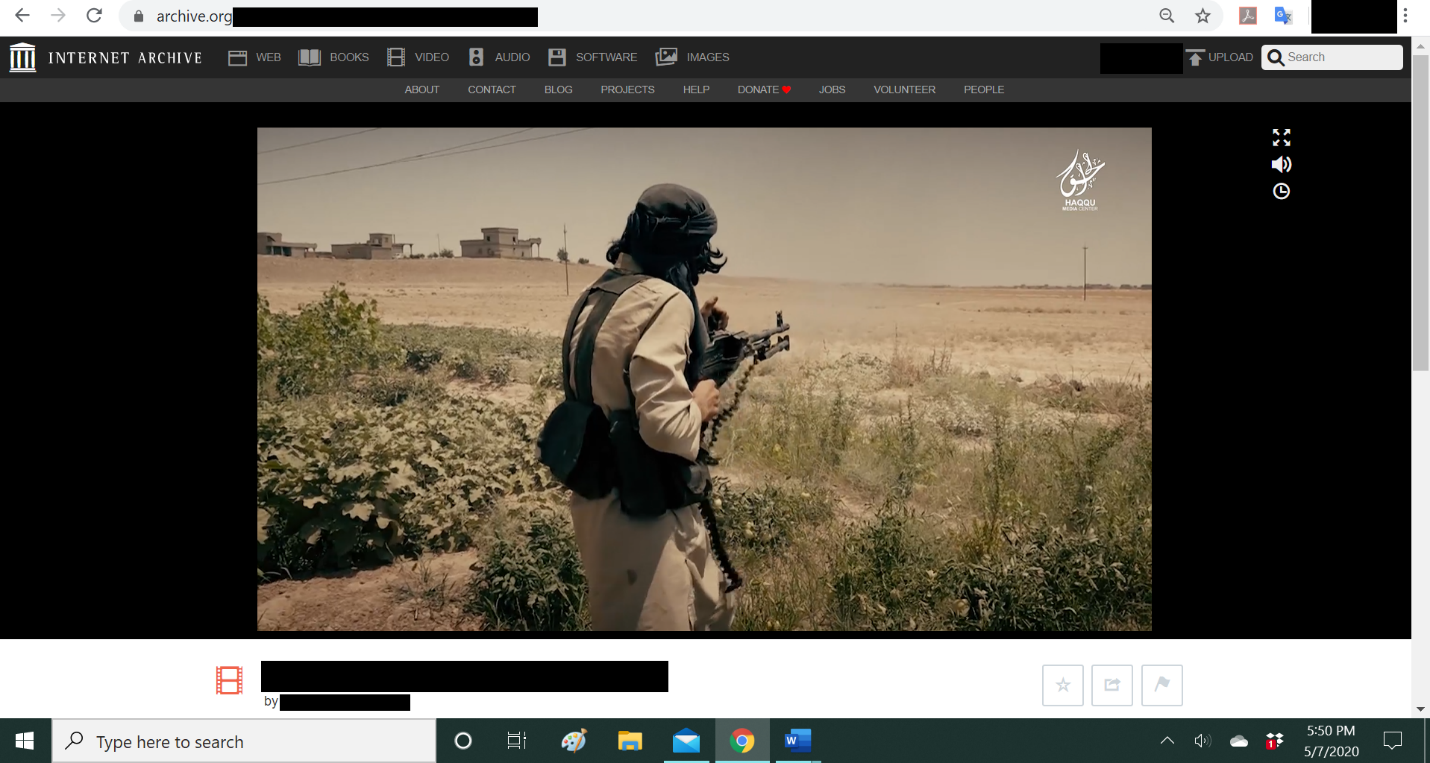 Haqqu Media video on the Internet Archive, five days after it was uploaded.

The second website, on the .xyz domain, has previously been removed from the .win, .in, and .ru domains. The website contains violent ISIS propaganda videos, weekly newsletters, and daily Amaq News updates. Videos on the website include recent ISIS releases, as well as notorious execution videos. The website uses Cloudflare anti-DDOS protection services. The previous versions of the website used Cloudflare as its name server.

On May 4, ISIS released an Amaq News propaganda video on multiple websites that allegedly shows an attack on a Nigerien military facility. The video shows combat and an execution of a wounded soldier. In addition to being posted on Telegram and RocketChat, the video was released on at least eight websites: Pcloud, File.Fm, Streamable, Ok.Ru, Yadi.Sk, Top4top, Mail.Ru, and Mega.Nz. Three days later, the video was still available on Telegram, RocketChat, and Ok.Ru.

A neo-Nazi accelerationist Telegram channel celebrated reaching 5,500 subscribers on May 7 by calling for mass shootings and other acts of violence with the intention of spreading fear and terror. The channel encouraged their subscribers to commit random acts of violence against people, including with firearms, as well as committing mass shootings in large public places in order to spread terror. The channel also encouraged shooting at cell phone towers.

The channel has previously praised the actions of terrorists such as Brenton Tarrant and Anders Breivik, has posted propaganda from and supported the Atomwaffen Division and The Base, and has called for mass violence.

On May 7, users of a white supremacist chan imageboard on the dark web celebrated Philip Manshaus as his trial began in Norway. Manshaus is facing murder and terrorism charges for allegedly killing his 17-year-old adopted Chinese born step-sister and then opening fire on the Al-Noor Islamic Center near Oslo. Manshaus was tackled and overpowered by a 70-year-old man praying at the mosque. Manshaus praised Brenton Tarrant and Patrick Crusius in online posts. In over a dozen messages, users of the imageboard glorified Manshaus’ alleged attack and called for additional violence.

A vagrant anti-civilization neo-Nazi started a community board on an 8chan successor website. The link was advertised on his Telegram page which has over 1,100 subscribers. The chan imageboard contains videos of the individual boxing with another white supremacist. The same individual also has an Instagram account where he promotes a violent form of white supremacism steeped in misogyny.