(New York, N.Y.) – The Counter Extremism Project (CEP) reports weekly on the methods used by extremists to exploit the Internet and social media platforms to recruit followers and incite violence. This week, a pro-ISIS website containing violent propaganda and notorious execution videos, weekly newsletters and daily Amaq News updates was located on the .in domain, while a pro-ISIS group released its third version of the “Voice of Hind” magazine which is meant to appeal to Muslims in the Indian subcontinent. Additonally, white supremacist Telegram channels encouraged users to interfere with New York City’s 311 operations by flooding the line with false reports and misinformation. CEP researchers also located a relaunched neo-Nazi website that uses Epik as its name server and registrar, and identified an administrator of a white supremacist Telegram channel praising anti-5G conspiracy theories. Finally, numerous white supremacist Telegram channels celebrated the 25th anniversary of the Oklahoma City bombing while neo-Nazi and white supremacist Telegram and an 8chan successor website celebrated Adolf Hitler’s birthday on April 20.

A pro-ISIS website was located on the .in domain. The website – previous versions of which have been removed from the Internet – contains violent ISIS propaganda videos, weekly newsletters and daily Amaq News updates, including recent ISIS releases, and notorious execution videos such as the burning to death of Jordanian pilot Lt. Muath al-Kasasbeh, and execution footage featuring Mohammed Emwazi a.k.a “Jihadi John.” The website uses Open Provider as its registrar and Cloudflare as its name server. The previous version of the website on the .win domain also used Cloudflare as its name server.

A JustPaste.It link was also located that contained information for locating the website after the current version is taken offline. The JustPaste.It page was created approximately one month ago, and had over 6,000 views on April 23.

On April 22, the third edition of the pro-ISIS online magazine “Voice of Hind” was released. The magazine is meant to appeal to Muslims in the Indian subcontinent. This latest edition praised the 2019 Sri Lanka Easter bombings, the March 25 ISIS attack on a Sikh gurdwara in Kabul, and attacks by ISIS fighters in Bangladesh. Voice of Hind also congratulated the perpetrators of an arson attack in the Maldives claimed by ISIS on April 15, and mentioned the February 4 stabbing of an Australian in the Maldives claimed by a pro-ISIS group, but not officially declared by ISIS. Attacks using knives, hammers, heavy objects, or using vehicles as weapons are encouraged in the issue. 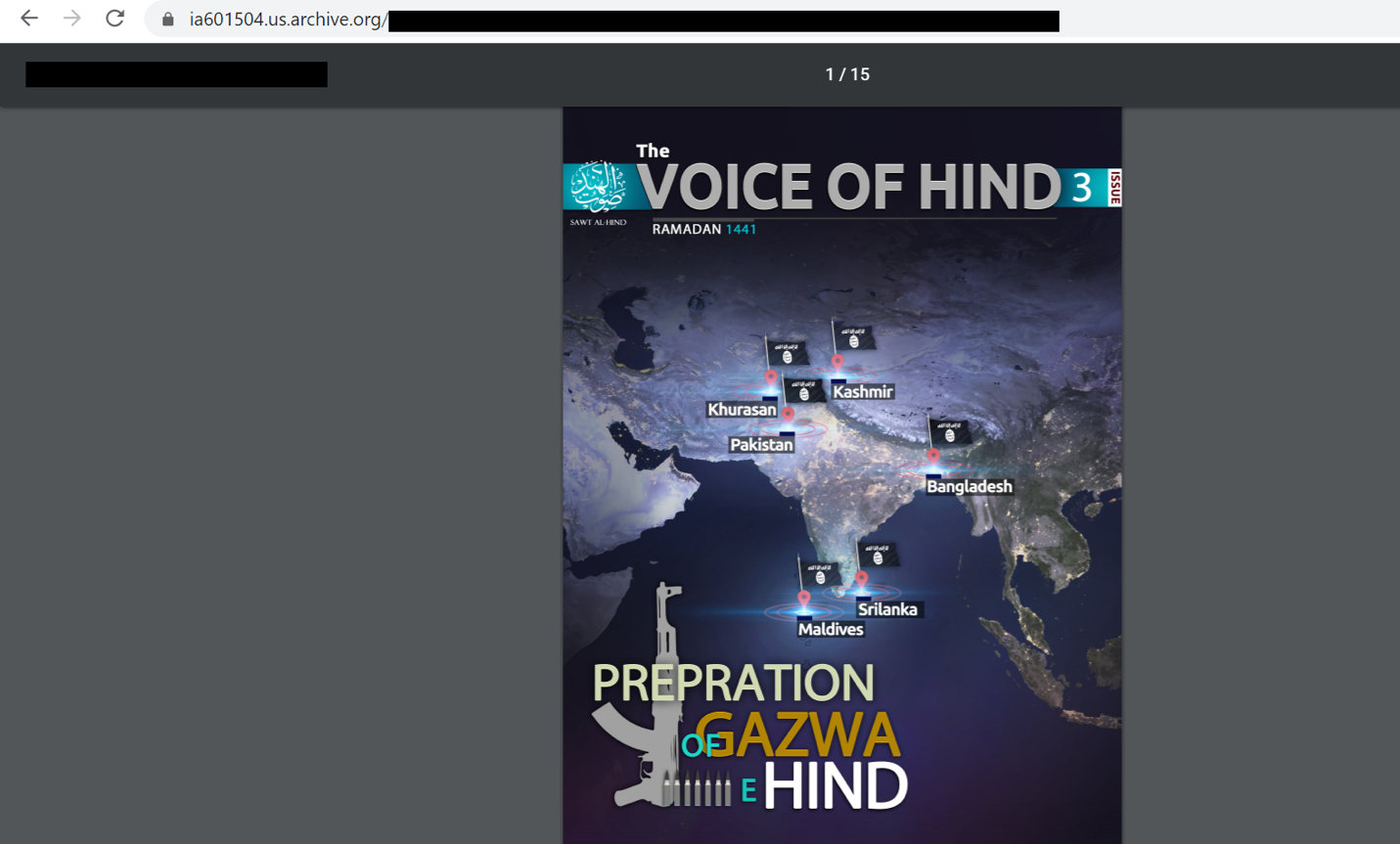 Pro-ISIS “Voice of Hind” online magazine on the Internet Archive, one day after it was uploaded, April 23

On Sunday, April 19, several white supremacist Telegram channels encouraged their users to anonymously interfere with New York City’s 311 operations by making false reports and providing false information. New York City Mayor Bill de Blasio tweeted on April 18 that New Yorkers could use 311 to send photos of businesses and other locations that were not enforcing COVID-19 social distancing. One Telegram channel posted instructions for anonymously interfering with the text message-based 311 system by using a burner phone or voice over IP number to anonymously send lewd photos. One of the Telegram channels, which coordinates trolling campaigns, stated that the purpose was to “clog up” the 311 number.

“The efforts by white supremacists Telegram channels urging users to obstruct New York’s 311 hotline is another alarming example of extremists exploiting COVID-19 to increase chaos and advance their radical ideologies,” said CEP researcher Joshua Fisher-Birch. “Increased online vigilance for groups and individuals with malicious intent are crucial to ensuring that these extremists are unable to disrupt the delivery of government services and information in the midst of the COVID-19 pandemic.”

The Telegram channels that called on their users to interfere with 311 operations included a notorious neo-Nazi accelerationist channel that promotes violence to its more than 2,800 members, and a channel dedicated to organizing coordinated trolling, which has over 550 members. The messages encouraging interference had been viewed between 300 and over 1,900 times by 11:15 AM on April 20.

On April 20, CEP researchers located a relaunched neo-Nazi website. The website uses Epik as the name server and registrar. A previous version of the site was removed in late March allegedly after anti-fascist activists had it removed. The website contains written propaganda, a forum, and instructions for joining the movement the website hopes to start. The site promotes national socialism, white supremacism, anti-Semitism, and Holocaust denial. A manifesto on the website states that they will alert others to the ways in which Jews are responsible for the perceived ills of the world. The manifesto calls for the reader to act to advance the cause of national socialism, calling their struggle a “total war”. The website also maintains a page on the Gab social network platform, a Telegram channel, and a BitChute video channel.

The administrator of a white supremacist Telegram channel posted a document to the Telegra.ph platform on April 19 praising anti-5G conspiracy theorists. The admin stated that conspiracy theories are a way to halt advancement of liberal policies, and praised the anti-5G community for their dedication to “direct action.” Conspiracy theorists have falsely claimed that 5G cellphone towers are connected to the spread of COVID-19. Mobile phone towers in the UK have been attacked over 50 times by individuals who have started fires, and telecom workers have been abused over 80 times.

Dozens of white supremacist Telegram channels celebrated the 25th anniversary of the Oklahoma City bombing on April 19. Multiple channels praised Timothy McVeigh, referring to him as a “saint” in a pantheon of white supremacist terrorists. Other channels claimed that McVeigh was justified for avenging the Branch Davidians killed during the Waco siege. Channels posted memes praising McVeigh, making references to the rented Ryder truck he used in the bombing, and encouraged further violence. An image of McVeigh made to look like a Nike ad applauding the bombing was viewed over 3,400 times after it had been online for four days on April 23.