Combat 18 (a.k.a. C18, 318, nicknamed “Terror Machine”) is a neo-Nazi group that seeks to create white-only countries through violence. The group was established in the United Kingdom and is now present in at least 18 countries worldwide. The “18” in the name refers to the first and eighth letters of the English alphabet, A and H, for Adolf Hitler. Combat 18 was founded in 1992 by Paul “Charlie” Sargent. It largely drew its membership from white supremacists associated with the Chelsea Headhunters soccer hooligan gang and the British neo-Nazi record label and political organization Blood and Honour (B&H).*Ryan Shaffer, “British, European and white: cultural constructions of identity in post-war British fascist music,” in Cultures of Post-War British Fascism, eds. Nigel Copsey and John E. Richardson (London: Routledge, 2015), 149; Tim Kelsey, “Informer exposes neo-Nazi football gangs,” Independent (London), August 6, 1993, http://www.independent.co.uk/news/informer-exposes-neo-nazi-football-gangs-tim-hepple-who-infiltrated-the-british-national-party-after-1459707.html. x 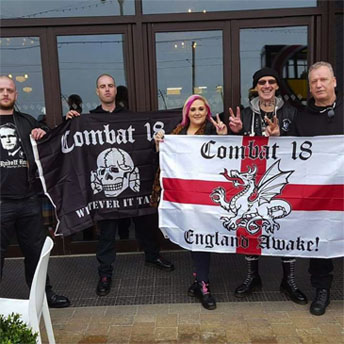 Combat 18 has a minimal Internet presence but some websites and social media pages for the group do exist. A Greek cell has used Facebook to coordinate attacks. A Czech cell that operated from 2011 to 2012 maintained a website to spread its message and recruit.* Yiannis Souliotis, “Gas Station Worker, 35, Suspected to Have Led Combat 18 Hellas Far-right Group,” Ekathimerini, March 8, 2018, http://www.ekathimerini.com/226527/article/ekathimerini/news/gas-station-worker-35-suspected-to-have-led-combat-18-hellas-far-right-group; “Czech Trial of Arson Attack Reviews Neo-Nazi Groups,” Romea, March 26, 2015, http://www.romea.cz/en/news/czech/czech-trial-of-arson-attack-reviews-neo-nazi-groups. x