(New York, N.Y.) – The Counter Extremism Project (CEP) reports regularly on the methods used by extremists to exploit the Internet and social media platforms to recruit followers and incite violence. Despite tech companies’ recent promises to remove this material, extremists—including Islamists and the far right—continue to use a variety of sites to spread hate and inspire attacks.

A roundup of CEP’s Extremist Content Online releases from the last few months of 2019 and into 2020 illustrate extremists’ enduring presence on the Internet.

A video originally posted on several white supremacist Telegram channels on July 3, 2019, featuring James Mason and calling for violence, was reposted on September 25 on the Telegram channel belonging to a white supremacist group that endorses terrorism. The same video was also located on YouTube, having been uploaded on August 11. The video on YouTube had 139 views on October 1. The video includes footage and quotes from James Mason in an interview for an MSNBC program in which he states that he does not condemn acts of violence, and that violence should be “worthwhile.” Mason also stated that more counter-protesters in Charlottesville should have been killed. 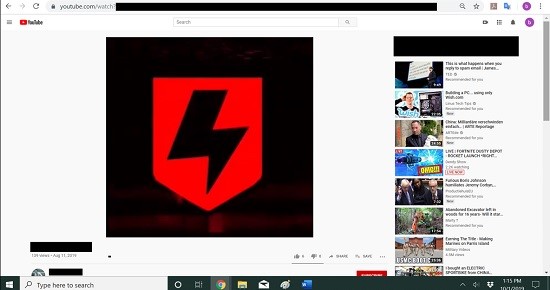 The James Mason propaganda video on YouTube on October 1, over seven weeks after it was uploaded.

Video featuring a static background or the text of then-ISIS leader Abu Bakr al-Baghdadi’s September 16, 2019, speech was uploaded to several different sites. Titled “And Say, Act,” Baghdadi urged his supporters to be patient and stated the importance of educating fellow Muslims about the self-proclaimed caliphate, allowing the group to grow, maintaining piety, and asking that fighters be just in their dealings with Muslims. Baghdadi also called for ISIS fighters to free men, women, and children in prisons and refugee camps, and to attack individuals who run those facilities.

Text versions of the speech in Bengali and Arabic were uploaded to at least 11 websites in addition to Telegram: Mediafire, Anonfile, Anonymousfiles.io, mail.ru, Google Drive, file.io, mega.nz, transfer.sh, top4top, pdf-archive.com, and x0.at. Approximately six days after they were uploaded, the text version of the speech was still available on eight websites: Mediafire, Anonfile, Anonymousfiles.io, mail.ru, mega.nz, transfer.sh, pdf-archive.com, and xo.at. Video of the speech, consisting of audio with a static background, was uploaded to at least five websites in addition to Telegram on September 30: ok.ru, mail.ru, pCloud.com, mega.nz, and Mediafire. Three days later, the video was still available on all five websites. 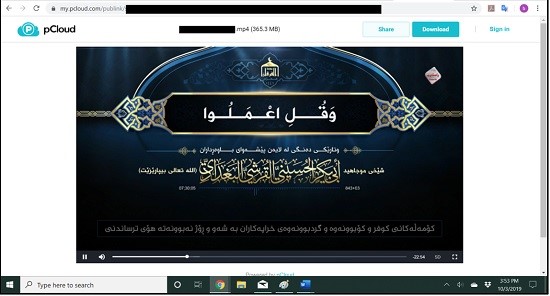 On Yom Kippur, October 9, Stephan Balliet attempted to attack a synagogue in the German city of Halle. Balliet, who was armed with a rifle and several homemade firearms and explosives, was unable to gain access to the synagogue and instead shot a female bystander and a male in a restaurant. Balliet engaged in a gun battle with police before he was taken into custody.

Using a helmet mounted camera, the gunman livestreamed his assault on the Amazon-owned streaming platform Twitch, which later claimed that the 35-minute livestream was viewed by five people. They then stated that the subsequent archived video was removed after being online for 30 additional minutes, but not before it was viewed by approximately 2,200 people. Links to the Twitch stream were spread on 4chan’s politically incorrect board, far-right Telegram channels, and on Twitter.

The video was spread on far-right Telegram channels, including those that specifically endorse terrorism, revere the New Zealand Christchurch attacker, and promote racism and fascism. At approximately 11 a.m. Eastern Time on October 14, the main copy of the video on Telegram (and spread on numerous channels) had been viewed more than 72,000 times. Other copies of the video, available via BitTorrent, were spread via the neo-Nazi website the Daily Stormer, and a humor and gaming Internet forum popular with extremists.

Recruiting Video From The Base Located On The Internet Archive, Group Announces New Recruiting Initiative In Australia

A recruiting video from the neo-Nazi self-described survivalist network, The Base, was located this week on the Internet Archive and Telegram. The same video was uploaded by two different accounts on the Internet Archive, one in late September 2019, the other on October 23. It was originally released in late September, and includes footage from two recent U.S. House Homeland Security Committee hearings on violence and white supremacism. The video also includes footage originally released in June, August, and September that shows members of The Base training with firearms, and shooting at a target with a Star of David.

The Base is an international white supremacist group that seeks to prepare its members for a race war. The group has operated several training camps in the U.S., disseminated bomb-making information, praised terrorists and mass shooters, and is friendly with the neo-Nazi group the Atomwaffen Division.

On October 24, recruiters for The Base announced a new drive for members in Australia on Gab. The group announced a new recruitment email address specifically for potential members from Australia using the service Proton Mail. The group has previously claimed to have members in Australia, and has sought recruits in Western Australia through online recruitment and posters in the city of Vincent. An older Australian recruitment poster featured the skyline of the city of Perth. Gab deleted the group’s main account in the summer of 2019, but several of the group’s supporters and recruiters still maintain profiles on the social media site.

On October 31, 2019, ISIS’s Al Furqan Media Foundation admitted that the group’s leader Abu Bakr al-Baghdadi, and spokesman, Abul Hasan al-Muhajir, were dead and named replacements for both. The audio announcement declared Abu Ibrahim al-Hashemi al-Qurayshi as the group’s new caliph, and Abu Hamza al-Qurayshi as the new spokesman. Following the Al Furqan release, individuals in pro-ISIS Telegram chats and channels pledged their allegiance to ISIS’s new leader and called for attacks in the West. The appointment of both men was confirmed in ISIS’s newsletter Al Naba issue number 206, released several hours following the audio statement on October 31. 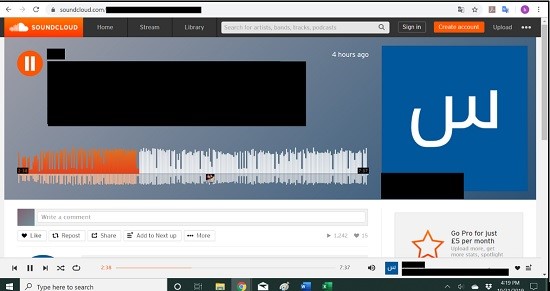 ISIS’s Al Furqan announcement on Soundcloud, with more than 1,240 “plays” approximately four hours after it was uploaded.

On November 6, 2019, ISIS released a video from their self-proclaimed North Baghdad province in Iraq, titled “Fate of the Criminals.” The video shows ISIS sleeper cells operating at night and committing attacks on property and equipment as well as executions of Popular Mobilization Forces militia members, including shootings and a beheading. The video also profiles an Iraqi ISIS suicide bomber.

In addition to Telegram, the video was released on at least 24 websites: ownCloud, Mediafire. Top4top, the Microsoft One Drive, Amazon Drive, the Internet Archive, mail.ru, ddl.to, Google Drive, Google Photos, file.fm, letsupload.co, mega.nz, mir.cr, Mirrorace.com, ok.ru, pc.cd, tune.pk, Dropbox, khlgy.com, Vidio, Zippyshare Zupload.net, and Turbobit. Seven to eight days later, the video was still available on 15 websites: ownCloud, Mediafire, Top4top, mail.ru, ddl.to, file.fm, letsupload.co, mega.nz, mir.cr, Mirrorace, ok.ru, Vidio, Zippyshare, Zupload, and Turbobit. The video was additionally located on Tune.pk, where it was online for two days when it was located, and the Internet Archive, where it was online for 24 hours when it was located.

The 16-year-old neo-Nazi convicted of planning to firebomb synagogues in the United Kingdom posted on the website Fascist Forge, where according to prosecutors he had “obtained and shared terror manuals on making explosives and firearms.” The individual had also sought ISIS execution videos, and was interested in using al-Qaeda manuals to manufacture poisons. Fascist Forge is a white supremacist web forum for followers of the neo-Nazi writer and propagandist James Mason, as well those who follow esoteric Hitlerism and fascist influenced forms of Satanism.

CEP has previously contacted the web services companies that help Fascist Forge stay online, with two—Hostinger and DeamHost—ceasing their provision of services to the site. Fascist Forge currently uses Cloudflare as its name server. It is unclear who is currently providing registry services to the website. Fascist Forge users have also previously posted instructions for manufacturing firearms and have discussed assassinations, lone actor terrorism, and have called for a campaign of targeted sexual violence against women. As of November 21, the forum had more than 1,300 registered users, up from 400 in January 2019.

On December 4, ISIS released a new video from their self-proclaimed province in Libya. The video, slightly over 30 minutes long and titled “And Expel Them From Wherever They Have Expelled You,” showed ISIS fighters participating in house raids, raiding checkpoints, and executing members of the Libyan National Army.

The video was spread on pro-ISIS Telegram and TamTam channels. In addition to being posted directly on both messenger platforms, the video was posted to at least 14 other websites: Dropbox, Top4top, the Microsoft One Drive, the Internet Archive, Dailymotion, file.fm, mega.nz, Mihan Video, mail.ru, ok.ru, pc.cd, uqload.com, the Amazon Cloud Drive, and Mediafire. Approximately 48 hours after the video was uploaded, it was still available on nine websites: Top4top, the Microsoft One Drive, file.fm, mega.nz, Mihan Video, mail.ru, ok.ru, uqload.com, and Mediafire. 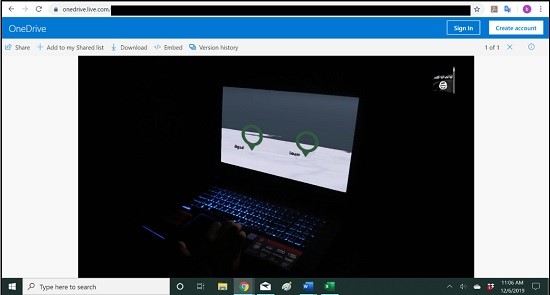 The ISIS video “And Expel Them From Wherever They Have Expelled You,” on the Microsoft One Drive, December 6, 2019.

On December 10, 2019, a video was released by a group claiming to be an Atomwaffen Division (AWD) cell in Ukraine. The video shows five men wearing camouflage uniforms and AWD patches, as well as digitally blurred patches for what appears to be the Ukrainian Azov Battalion and Right Sector. One of the individuals threatened Ukrainian politicians with violence, and stated that they “surrender our native land to the enemies and exploit our great race.” The video includes footage from other groups, including a clip originally from protests in Kiev in 2014, and footage from far-right marches in Ukraine.

The Telegram channel that posted the video also uploaded an accompanying pamphlet that advises readers on how to create their own AWD cell. The pamphlet includes an “AWD oath,” instructions on composing a uniform, a reading list, and information on joining. A version of the video was also available on YouTube. The copy on YouTube was on the site for approximately two days when it was located, and had 37 views.

A new ISIS video was released on January 10, 2020, from the group’s self-proclaimed West Africa province. The video includes footage from various locations in approximately the past two years. The video includes gory combat footage, including previously released clips taken from a helmet mounted camera during the 2017 Tongo Tongo ambush when U.S. and Nigerian soldiers were attacked by Islamic State in the Greater Sahara. The video also includes previously released footage from Amaq News clips. The video concludes with the execution of two soldiers in Mali.