(New York, N.Y.) - The Counter Extremism Project (CEP) reports weekly on the methods used by extremists to exploit the Internet and social media platforms to recruit followers and incite violence. This week, a neo-Nazi British teenager was convicted for plotting attacks on synagogues in the United Kingdom, and records show he was active on the white supremacist website Fascist Forge. Additionally, the National Socialist Movement declared support for Neo-Nazi group, The Base, and an online cache of modified Christchurch attack videos was located on the video website webm.red. A pro-ISIS news website was located as well as over 45 items of recent ISIS Amaq content was identified on the Internet Archive.

The sixteen-year-old neo-Nazi convicted of planning to firebomb synagogues in the UK posted on the website Fascist Forge, where according to prosecutors he had “obtained and shared terror manuals on making explosives and firearms.” The individual had also sought ISIS execution videos, and was interested in using al-Qaeda manuals to manufacture poisons. Fascist Forge is a white supremacist web forum for followers of the neo-Nazi writer and propagandist James Mason, as well those who follow esoteric Hitlerism and fascist influenced forms of Satanism.

“In March, Fascist Forge was taken offline by two web services companies, first DreamHost and then Hostinger, after CEP advocacy. The companies’ withdrawal of services were in part due to the forum’s role as a platform for recruitment propaganda for the neo-Nazi group the Atomwaffen Division. Fascist Forge is currently using Cloudflare as their name server and an unknown web services company as their registrar,” said CEP researcher Joshua Fisher-Birch. “Unfortunately, the forum’s continued online presence has had real world consequences. In this case, a teenager used Fascist Forge and another website to acquire manuals for constructing explosives and firearms, and to network with likeminded extremists. Sites like Fascist Forge that seek to spread violent extremism pose a persistent danger and web services companies should cease doing business with them.”

CEP has previously contacted the web services companies that help Fascist Forge stay online, with two, Hostinger and DeamHost, ceasing to provide services to the site. Fascist Forge currently uses Cloudflare as its name server. It is unclear who is currently providing registry services to the website. Fascist Forge users have also previously posted instructions for manufacturing firearms and have discussed assassinations, lone actor terrorism, and have called for a campaign of targeted sexual violence against women. As of November 21, the forum had over 1,300 registered users, up from 400 in January 2019, however it is unclear how many are active.

National Socialist Movement Declares Support For Neo-Nazi Group The Base

On November 20 and 21, a Telegram channel claiming to represent the National Socialist Movement (NSM) declared their support for the neo-Nazi survivalist group The Base. The NSM channel declared that the Base were “like us but younger,” and that the two groups were building “unity.” The National Socialist Movement was at one point the largest neo-Nazi group in the country, however their numbers have since declined.

This expression of support is significant because the two groups publicly differ in terms of tactics. The NSM has focused on sometimes armed public demonstrations and making propaganda, while the Base is a network that endorses accelerationism, seeks to train and prepare members for a race war, and openly endorses the use of violence against Jews, people of color, LGBT people, and the government.

CEP researchers located over 45 pieces of propaganda from ISIS’s Amaq News outlet on the Internet Archive that were posted in November 2019. Content included text-based statements, propaganda photos, and short propaganda videos, which included displays of violence. The uploads were made by three different accounts, with one user posting 72 percent of all Amaq content. The Internet Archive does not explicitly prohibit the upload of content made by terrorist groups, or content that glorifies the use of extremist violence. 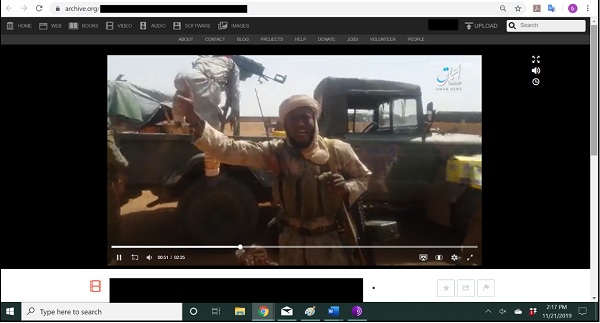 ISIS Amaq News Video on the Internet Archive that shows the aftermath of an attack on a Malian military base. The video includes shows several bodies of Malian soldiers. Posted and located on November 21, 2019.

On November 21, CEP researchers located a pro-ISIS news website on the .ga domain, the top-level domain for the country of Gabon. The website, titled “Come to Success News,” includes ISIS Amaq news content, essays, audio files, propaganda photos, and videos, including those showing executions. Several versions of the same website have previously been removed from the internet, including at least one website on the .ga domain. The site uses the Dutch company Freenom as its name server.

CEP researchers located a cache of content glorifying the Christchurch terrorist attack on the video website webm.red, with links spread via a Pastebin page. Content, all which were videos in webm format, included songs praising the attacker and clips from the attack video modified to resemble video games, or changed to further glorify the attack and denigrate Muslims. Pastebin’s Terms of Service prohibits content that is meant to “incite violence towards any individual or group.” Webm.red forbids content that is prohibited in the United States, but does not have any other stated Terms of Service. After being alerted to the presence of the content glorifying the Christchurch attack, Pastebin removed the page. The website webm.red removed 80 percent of reported links, however they let 13 videos, including those containing violent footage from the attack, remain online.