(New York) - The Counter Extremism Project (CEP) reports weekly on the methods used by extremists to exploit the Internet and social media platforms to recruit followers and incite violence. This week’s edition found that ISIS’s Al Furqan Media Foundation formally announced the deaths of their former leader and spokesman, Abu Bakr al-Baghdadi and Abul Hasan al-Muhajir. ISIS then declared Abu Ibrahim al-Hashemi al-Qurayshi to be the new leader of the terrorist organization, and Abu Hamza al-Qurayshi to be the replacement spokesman. Additionally, Neo-Nazi James Mason condemned the confiscation of an Atomwaffen Division (AWD) member’s firearms on the Siege Culture website after the alleged AWD leader in Washington state had firearms seized for threatening violence.

On October 31, ISIS’s Al Furqan Media Foundation admitted that the group’s former leader Abu Bakr al-Baghdadi, and spokesman, Abul Hasan al-Muhajir, were dead and named replacements for both positions. The audio announcement declared Abu Ibrahim al-Hashemi al-Qurayshi as the group’s new caliph, and Abu Hamza al-Qurayshi as the new spokesman. The true identities of both individuals are currently unknown, and photographs of both men have not been released. The use of “Qurayshi” indicates that both claim to be descendants of the tribe that the Prophet Mohammad belonged to, which is necessary for the role of ISIS’s caliph. The audio announcement mentioned global ISIS operations and declared that the group still poses a threat to the U.S. and other countries.

“ISIS’s acknowledgement of the deaths of Abu Bakr al-Baghdadi and Abul Hasan al-Muhajir on Telegram several days after the U.S. raid was expected,” said CEP researcher Joshua Fisher-Birch. “Their declaration of new leadership shows that the terror group is far from defeated and that regardless of Baghdadi’s death, they will continue to fight both on the battlefield and online.”

Following the Al Furqan release, individuals in pro-ISIS Telegram chats and channels pledged their allegiance to the group’s new leader and called for attacks in the West. The appointment of both men was confirmed in ISIS’s newsletter Al Naba issue number 206, released several hours following the audio statement on October 31. ISIS’s self-proclaimed provinces in the Sinai, Bangladesh, Somalia, Pakistan, and Yemen released propaganda photos on Telegram showing fighters pledging their support to the new leadership. 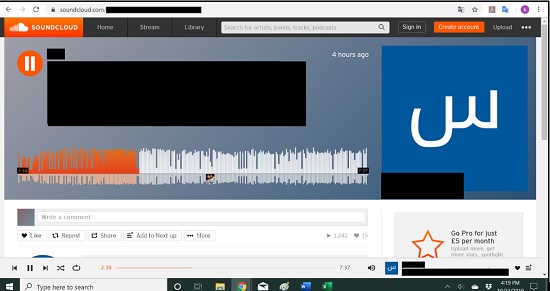 ISIS Al Furqan announcement on Soundcloud, with more than 1,240 “plays” approximately four hours after it was uploaded. 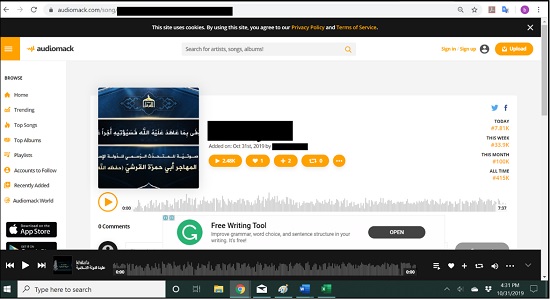 ISIS Al Furqan announcement on Audiomack, with almost 2,500 “plays” approximately four hours after it was uploaded. The page included advertising managed by Google.

In an audio broadcast released on October 28 on the Siege Culture website, James Mason decried the confiscation of an Atomwaffen Division (AWD) member’s firearms by law enforcement officers using an Extreme Risk Protection Order. Kaleb Cole, AWD’s alleged leader in Washington state, had nine firearms seized in late September for threatening violence against others and showing a pattern of threats of violence.

Mason, the author of the notorious book Siege, compared the firearm seizure to George Orwell’s novel 1984, and stated that the seizure was entirely political, and not based on any actual threat. Calling the seizure and anti-white supremacist campaign a “witch hunt,” Mason stated that now is not the time for a revolution, but alleged that there is an anti-white and anti-Christian conspiracy at play. Mason concluded with a warning by stating that weapons seizures and monitoring of white supremacists would eventually lead to attacks by those who are unknown to the government. Mason has previously endorsed violence and terrorism against the government, Jews, and people of color.

The Siege Culture website uses Tucows as its registrar and Njalla, a company based in the Caribbean country of Saint Kitts and Nevis, as its name server.