(New York, N.Y.) - The Counter Extremism Project (CEP) reports weekly on the methods used by extremists to exploit the Internet and social media platforms to recruit followers and incite violence. This week, ISIS released a new video on multiple websites declaring its strength in Iraq. Additionally, video of the March 2019 Christchurch terror attack was located on the Internet Archive. Lastly, white supremacists are using Telegram to advertise the launch of an “.onion” page and to urge violence in response to potential Virginia gun control laws.

On Saturday, December 14, ISIS released a new video titled “They Will Not Harm You Except for (Some) Annoyance” from the group’s self-proclaimed Dijlah province in Iraq. The video mocked the U.S. for the aerial bombing of Qanus Island in September and declared that ISIS continues to maintain its strength in Iraq. The video includes a scene of a night attack on Popular Mobilization Forces which includes the execution of prisoners and setting fire to crops. The video concludes with ISIS fighters pledging their allegiance to the group’s leader Abu Ibrahim al-Hashimi al-Qurashi.

“Despite the loss of their territories and former leader Abu Bakr al-Baghdadi, ISIS has proved that they are resilient and will continue to commit violent attacks in areas where they can muster force, and spread the propaganda generated by those attacks online,” said CEP researcher Joshua Fisher-Birch. “Kurdish intelligence sources have indicated that ISIS is widely pervasive in northeast Iraq, the spread of the group’s propaganda and online content only bolsters their claims of strength.” 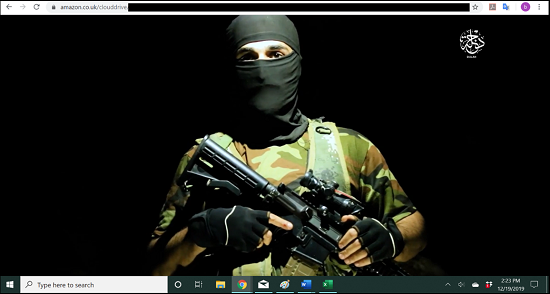 The ISIS video “They Will Not Harm You Except for (Some) Annoyance” available on Amazon Cloud Drive on December 19, five days after it was uploaded.

Several white supremacist Telegram channels advocated resistance or violence in response to potential gun control laws in Virginia. These channels are looking for opportunities to encourage anti-government accelerationist violence. A channel that produces short propaganda videos released one titled “Virginia is for Gun Lovers” that features scenes taken from Brenton Tarrant’s video, as well as footage from the February 1997 North Hollywood shootout, and features Ted Kaczynski, Dylann Roof, Anders Breivik, Robert Dear Jr., and Timothy McVeigh. Another channel encouraged its viewers to “fan the flames” of tension. While the individuals behind white supremacist Telegram channels strongly support the right to own firearms, they are seeking to exploit the division and anti-government sentiment associated with gun control.

Virginia Governor Ralph Northam has proposed eight gun control measures to the Democratic controlled state legislature for 2020, including banning certain types of assault weapons and allowing a court to temporarily restrict an individual’s access to firearms if they present a danger to themselves or others. Numerous counties in Virginia have declared themselves “second amendment sanctuaries” in response to the possibility of gun control laws. Virginia Representative Donald McEachin suggested that Governor Northam might have to use the National Guard to enforce the law.