(New York, N.Y.) – The Counter Extremism Project (CEP) reports weekly on the methods used by extremists to exploit the Internet and social media platforms to recruit followers and incite violence. Last week, ISIS released a new propaganda video titled “The Epic Battles of Attrition 4” from the group’s self-proclaimed Khayr province in Syria. Meanwhile, CEP researchers located a propaganda video on YouTube from a media group affiliated with the white supremacist group Rise Above Movement (RAM) featuring its founder, Robert Rundo, traveling to Bulgaria for an annual gathering of white supremacists. Additionally, researchers identified a video on a white supremacist accelerationist Telegram channel encouraging acts of violence, as well as an online clothing store that uses the Automattic-owned WooCommerce platform to sell anti-Semitic merchandise.

On August 9, ISIS released a new propaganda video titled “The Epic Battles of Attrition 4” via the group’s self-proclaimed Khayr province in Syria. The footage shows IED and armed attacks against the Syrian Democratic Forces, as well as several executions. The video also states that the coronavirus is divine punishment against countries that have fought against ISIS, and that the group is active and has not been defeated, counter to U.S. claims.

“The continued proliferation of violent ISIS propaganda online underscores how extremists are using social media platforms as a tool to communicate their intentions, taunt their opponents, and seeking to recruit vulnerable individuals into their movement,” said CEP researcher Joshua Fisher-Birch. “Web platforms that allowed this content to surface such as Facebook and Telegram should remove this video for violating their Terms of Service, along with all other ISIS and extremist content from their platforms, in order to deter extremists from committing real-world harm.” 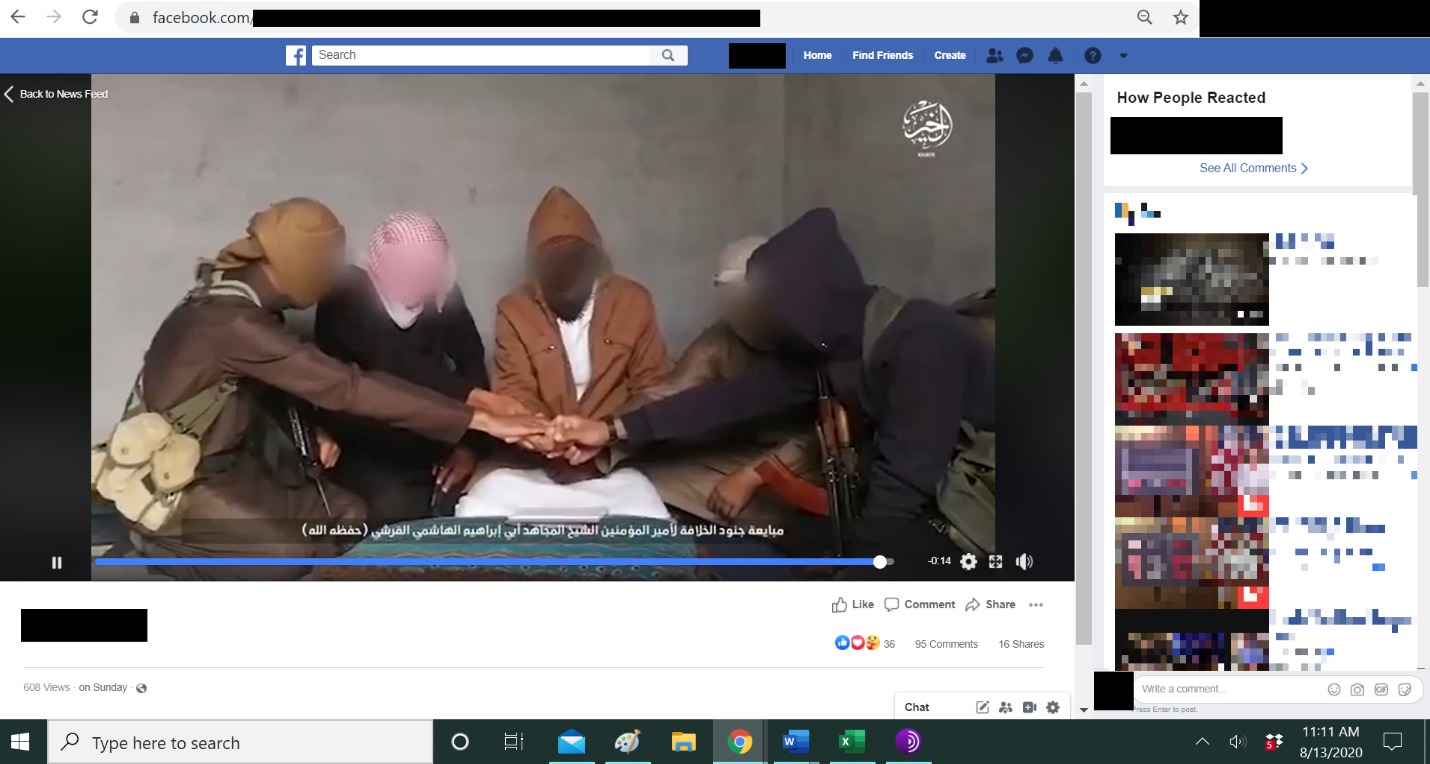 The ISIS Video “The Epic Battles of Attrition 4” on Facebook, three days after it was uploaded. The video had been viewed over 600 times, and had been shared 16 times when it was located.

CEP researchers located a video on YouTube made by a media group affiliated with the white supremacist Rise Above Movement (RAM). The video features RAM’s founder and alleged leader, Robert Rundo, traveling to Sofia, Bulgaria, for the February 2020 Lukov March, which was canceled by city authorities. The annual march honors pro-Nazi general Hristo Lukov and is a networking opportunity for European white supremacist groups. The video features interviews with a leader of the far-right Bulgarian National Union, a member of the neo-Nazi White Front, and a member of the Nordic Resistance Movement.

The video was posted on August 8 and had over 1,100 views five days later. The RAM media group is attempting to create a U.S.-European linked white supremacist counterculture.

RAM affiliated content has been repeatedly found on YouTube, despite the group’s use of and promotion of violence. In July 2019, three RAM members were given prison sentences of 27, 33, and 37 months respectively, after pleading guilty to charges related to attacking counter-protesters in Charlottesville, Virginia in 2017. Rundo himself was charged with crimes related to perpetrating violence at demonstrations but had his charges dismissed by a judge. The U.S. Department of Justice has stated that RAM members have previously “documented and promoted their white supremacy ideology through postings on various internet platforms.”

On August 8 and then again on August 10, a white supremacist accelerationist Telegram channel posted a video encouraging acts of violence. The video features footage from recent protests and unrest, including several clips of vehicular attacks. The video references Christchurch attacker Brenton Tarrant multiple times and encourages violence that will spread chaos and destabilize society. Five days after it was posted, the video was viewed over 7,500 times and was shared by at least ten different white supremacist Telegram channels. The channel that posted it had over 4,200 subscribers on August 13.

CEP researchers located an anti-Semitic clothing store that uses the Automattic-owned WooCommerce platform. The website sells dozens of t-shirts, including designs that mock the Holocaust, support white supremacism, blame Jews for the September 11 attacks, and support the expulsion of Jews from the United States. The website uses Cloudflare as its name server and GoDaddy as its registrar.

CEP researchers located a pro-ISIS website on the .es domain previously removed from the .pw, .info, .xyz, .win, and .in domains. The website contains violent ISIS propaganda videos, the terror group’s weekly newsletters, and daily Amaq News updates. Videos on the website include recent ISIS releases as well as historical videos. The pro-ISIS .es domain website, like it’s previous versions, uses Cloudflare services. The website’s domain suffix has changed, but the name of the website has remained the same.

CEP researchers located an instructional video on the Internet Archive made by a pro-ISIS group that shows how to make an improvised explosive device. The video was uploaded on August 6, 2020, and had at least 17 views on the website itself, not including downloads, on August 13. The video was reported but remains on the platform. The Internet Archive has been slow to remove bomb-making instructions in the past, including ‘how-to’ directions from ISIS and white supremacists.

CEP researchers located a pro-ISIS French-language propaganda page on the Minds social media platform. The page had over 1,350 views when it was located on August 12, having been online for approximately seven days. The page is used to spread ISIS propaganda, including photos, news updates, links to the group’s videos on other websites, and an Amaq News video. Each post on the account had had an average of approximately 60 views.