On July 1 and July 2, a media group affiliated with the white supremacist group Rise Above Movement (RAM) uploaded two videos on YouTube titled “real-world tips for nationalists.” Both videos feature RAM co-founder Robert Rundo and provide links to a propaganda website operated by RAM. YouTube removed a video put out by the same group on June 24 for violating the site’s hate speech policies. Even though the videos were reported, the two YouTube videos located the first week of July were not removed, despite sharing the same links and iconography as the deleted video.

The first video features Rundo offering advice on traveling overseas while on a government watchlist or the No Fly List. Rundo advises the audience to always use a burner phone while out of the country in case it is searched by the U.S. Department of Homeland Security upon one’s return. Rundo also instructs the audience on how to respond to U.S. government officials when reentering the U.S. and advises viewers to obtain a second passport. The video had over 180 views approximately 24 hours after it was uploaded.

In the second video, uploaded on July 2, Rundo offers advice on effective techniques to spread propaganda. Among other information, Rundo states that now is the perfect time to spread graffiti and perform banner drops, because of the ability to wear a mask and gloves to hide your identity. The video had over 280 views after being online for less than 24 hours.

RAM is a southern California white supremacist street fighting crew whose members were involved in physical assaults at protests in California and Charlottesville, Virginia. In July 2019, three RAM members were given prison sentences of 27, 33, and 37 months respectively, after pleading guilty to charges related to attacking counter-protesters in Charlottesville in 2017. Rundo himself was charged with crimes related to perpetrating violence at demonstrations but had his charges dismissed by a judge. The U.S. Department of Justice has stated that RAM members have previously “documented and promoted their white supremacy ideology through postings on various internet platforms.” RAM members have traveled to Europe to participate in far-right gatherings. 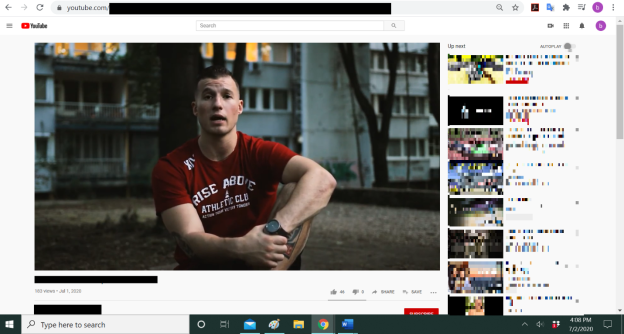 CEP researchers located a 14-track neo-Nazi album on Dropbox promoting violence against the LGBTQ community. The music features a computer-generated voice and is attributed to a former McDonald’s advertising mascot co-opted by the extreme right. The album encourages terrorist attacks on LGBTQ pride parades, attacks on transgender people, and street violence against LGBTQ people. The files were uploaded on June 29, with links posted on Telegram and a Reddit subreddit dedicated to the group. On June 29, Reddit stated that they would ban over 2,000 communities for hate speech and other infractions. The subreddit has not been deleted.

Dropbox’s Acceptable Use Policy prohibits content that “advocate(s) bigotry or hatred against any person or group of people based on their race, religion, ethnicity, sex, gender identity, sexual orientation, disability, or impairment.”

On June 29, a white supremacist Telegram channel notorious for glorifying mass murder and praising white supremacists who have committed mass attacks posted instructions for making thermite. Thermite is a composition that burns at extremely high temperatures that can be used in incendiary devices, or to burn through metal. While thermite recipes can be found in numerous locations on the Internet, the channel that posted the content has routinely praised acts such as mass shootings and sought to incite violence against Jews and people of color, among others. The Telegram channel has over 750 subscribers.

CEP researchers located ISIS propaganda photos on two bulletin board style websites, JustPaste.It and Telegra.ph. JustePaste.It is a site that allows users to share text and pictures easily and has been used by ISIS online propagandists since at least 2014. Content located on JustPaste.It on July 2 included propaganda photosets showing corpses of Nigerian soldiers allegedly killed by ISIS fighters, ISIS Amaq news releases, sections of ISIS’s Al Naba newsletter, and links to content on other platforms. The JustPaste.It page was online for 11 hours when it was located.

CEP researchers also located ISIS propaganda photos claiming to be of dead anti-ISIS coalition soldiers in Mozambique on the Telegra.ph platform. Telegra.ph, which is part of the Telegram communications app, functions similarly to a bulletin board, allowing users to share content with individuals who do not have Telegram accounts. CEP noted in June that ISIS was continuing to use Telegra.ph to share propaganda, despite Telegram’s recent and continuing crackdown on ISIS accounts.