Despite his Notoriety, the Video Appears on More Than 30 Websites

The Counter Extremism Project (CEP) reports weekly on the methods used by extremists to exploit the Internet and social media platforms to recruit followers and incite violence. This week’s edition spotlights ISIS leader Abu Bakr al-Baghdadi’s re-emergence in a video posted online one week after the horrific Easter Sunday terrorist attacks targeting churches and hotels in Sri Lanka. In the video, found on more than 30 different websites, Baghdadi congratulates the attackers and claims the attacks were carried out to avenge ISIS’s loss in Baghouz, Syria. In addition, this week’s edition documents white supremacists celebrating the recent Poway Synagogue shooting online and encouraging similar future attacks.

On April 29, ISIS’s al Furqan Media Foundation released a video titled “In the Hospitality of the Leader of the Faithful,”  featuring the group’s secretive leader, Abu Bakr al-Baghdadi.  The last time Baghdadi appeared in an ISIS propaganda video was in July 2014, when he proclaimed the existence of the caliphate.  In the almost five years since, Baghdadi’s health, whereabouts and level of control over the organization have been the subject of a great deal of speculation.  The video is incredibly significant in that it sends a message to ISIS’s supporters that Baghdadi is alive, and that the group is still strong despite recent setbacks.

“ISIS leader Abu Bakr al-Baghdadi is the most famous living extremist in the world. The fact that various platforms were used to spread such an important and easily identifiable video raises concerns regarding the tech industry’s ability to prevent the spread of extremist content,” stated CEP Executive Director David Ibsen. “The video of Baghdadi should  have been an easy, high-profile win for content removal, including the preventative technology that large tech companies so often boast about – but, predictably, terrorist content fell through the cracks.”

A Turkish subtitled version of the video was available on Telegram and uploaded to at least five other sites: ok.ru, nofile.io, the Internet Archive, Google Photos and mail.ru. Approximately two days later, the video was still available on nofile.io. 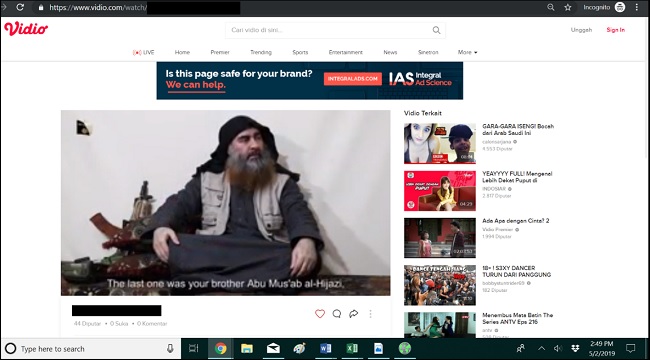 “In the Hospitality of the Leader of the Faithful,” with English subtitles on the Indonesian streaming website Vidio. Located on May 2, 2019.

CEP researchers located a website containing archives of ISIS’s radio reports from the group’s Al Bayan official station. In addition to an archive of ISIS daily radio broadcasts, the site included audio segments from ISIS leaders, including its now deceased spokesman Abu Mohammad al-Adnani. The website used Hostinger as a registrar and Cloudflare as a name server. 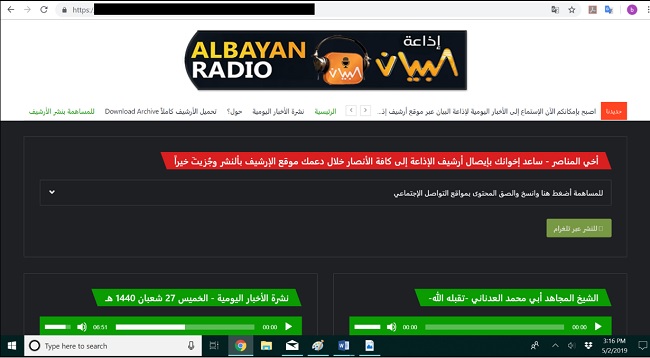 A handbook that offers extensive advice on fighting a race war, including bomb making instructions, was located on several websites this week. The author makes clear that his or her hope is that readers commit individual attacks themselves, and that underground cells be created to commit acts of terrorism in the name of white supremacy. The book, which was written by an anonymous author in the early 2000s, contains more than 300 pages of information on topics ranging from the use of firearms and poisons, to the manufacture of explosives and IEDs, to tactics such as assassination, property destruction, information security and avoiding capture by law enforcement officers.

Michal Szewczuk, a member of the British neo-Nazi Sonnenkrieg Division was in possession of the handbook, or an extremely similar document, and pled guilty in a British court on April 23, 2019 to two counts of encouraging terrorism and five counts of possessing documents useful to a terrorist.

A link to the handbook was posted on the website 4chan shortly after the Poway Synagogue shooting. The handbook was located on the Internet Archive, Scribd, Pdfdrive.com and epdf. The copy on the Internet archive was uploaded in February 2019 and had 157 views on May 2. Three copies on Scribd had over 4,500 views, 454 views, and 138 views respectively, the copy on PDF drive had 64 downloads and the epdf copy had 49 downloads and 505 views (all numbers checked on May 2).

Despite the links being reported for removal for violating their respective sites’ Terms of Service, none of the aforementioned websites took action as of May 7, four days after reporting.

Several online white supremacist communities celebrated the April 27 Poway Synagogue shooting that resulted in the death of one person and the wounding of three others. The notorious white supremacist website The Daily Stormer offered tips to future gunmen, writing “A jammed gun certainly explains the low score. Brenton Tarrant had an entire arsenal.” The website also posted the alleged gunman’s manifesto and a video of him playing the piano. The Daily Stormer stopped short of directly advocating for violence, however. Andrew Anglin, the site’s editor and publisher, stated “I’m against violence and so on, and it is sad to see a kid of 19 throw his life away. But what are we to expect is going to happen?” The article concluded with Anglin explaining to his audience that “the important thing to understand is that there is nothing else that could have happened. There is no way that the behavior of the Jews could result in anything other than a response.” The Daily Stormer uses two Chinese companies, Eranet International Ltd. as its registrar, and DNSpod.net as its name server.

White supremacist communities on 4chan and 8chan also celebrated the synagogue attack. Users on one white supremacist 4chan board praised the attacker, while noting that he could have killed more. Users on a similar board on 8chan also praised the attack, with some users stating that the gunman “did nothing wrong” or described him as a “saint.” One user posted materials and instructions necessary for making homemade smoke grenades, as well as suggestions for making the improvised grenade lethal, directly in the 8chan thread.