(New York, N.Y.) – The Counter Extremism Project (CEP) reports weekly on the methods used by extremists to exploit the Internet and social media platforms to recruit followers and incite violence. Last week, three separate uploads of James Mason’s neo-Nazi manifesto Siege were made available for purchase on the website Lulu, a print-on-demand, self-publishing, and distribution online marketplace that halted sales of the book from its site in April 2019. Additionally, CEP researchers located the website for a North American-based neo-Nazi group which features essays idolizing Adolf Hitler and national socialism, and encourage the spread of anti-Semitism and racism.

CEP also identified four ISIS Amaq News videos that were uploaded to Telegram and spread across multiple other platforms, with each video displaying terrorist brutality such as an execution, post-attack wreckage of an Iraqi police vehicle, mortar attacks and an attack against the Iraqi armed forces that included a bombing and heavy machine gun fire. Finally, a pro-ISIS website featuring violent ISIS propaganda videos, ISIS weekly newsletters and daily Amaq News updates was located by CEP researchers on the .pw domain after being previously removed from the .info, .xyz, .win, .in and .ru domains.

Three different uploads of James Mason’s book Siege were located on the website of print-on-demand publisher Lulu. The website previously stopped selling the book in April 2019, however it has been reuploaded and made available for purchase. Mason has substantial ties to the Atomwaffen Division (AWD), including an appearance in one of their recruitment videos, and his book Siege was required reading for the neo-Nazi accelerationist groups AWD and The Base.

CEP researchers located the website for a North American based neo-Nazi group that uses Dreamhost as its name server and registrar. The group claims to defend their “race and nation.” Essays on the group’s page praise Adolf Hitler and national socialism, and encourages the spread of anti-Semitism and racism. The website contains photos from a banner drop in Arizona, and the posting of propaganda in several unnamed locations. Members of a Telegram chat for supporters of the group have praised Brenton Tarrant, posted content from the Nordic Resistance Movement, and spread conspiracy theories.

CEP researchers located four ISIS Amaq News videos the week of May 16 to May 22. The first video, uploaded on May 17, showed the execution of a man identified as a Kurdish deminer. The video was uploaded to Telegram, and links were spread on RocketChat and Hoop. The video was uploaded to at least 10 websites: Amazon Drive, File.Fm, Streamable, Top4top, Dropbox, Mediafire, the Microsoft One Drive, the Internet Archive, Ok.Ru, and Mega.Nz. Three days later, the video was available on at least three websites in addition to Telegram: Mediafire, the Internet Archive, and Ok.Ru.

Three additional videos showed what ISIS claimed was the wreckage of an Iraqi police vehicle after an attack, the use of a mortar against an Iraqi military installation in Anbar province, and what the terrorist group claimed was the bombing of an Iraqi army vehicle and firing a heavy machine gun at a military installation in Anbar. All three videos were uploaded to Telegram, and had their links spread on Telegram and Hoop. All three videos were uploaded to at least eight websites in addition to Telegram on May 20: File.Fm, Yadi.Sk, Ok.Ru, Top4top, Mail.Ru, Mediafire, Dropbox, and Mega.Nz. Approximately one day later, all three videos were still available on three websites in addition to Telegram: Ok.Ru, Top4top, and Mediafire. 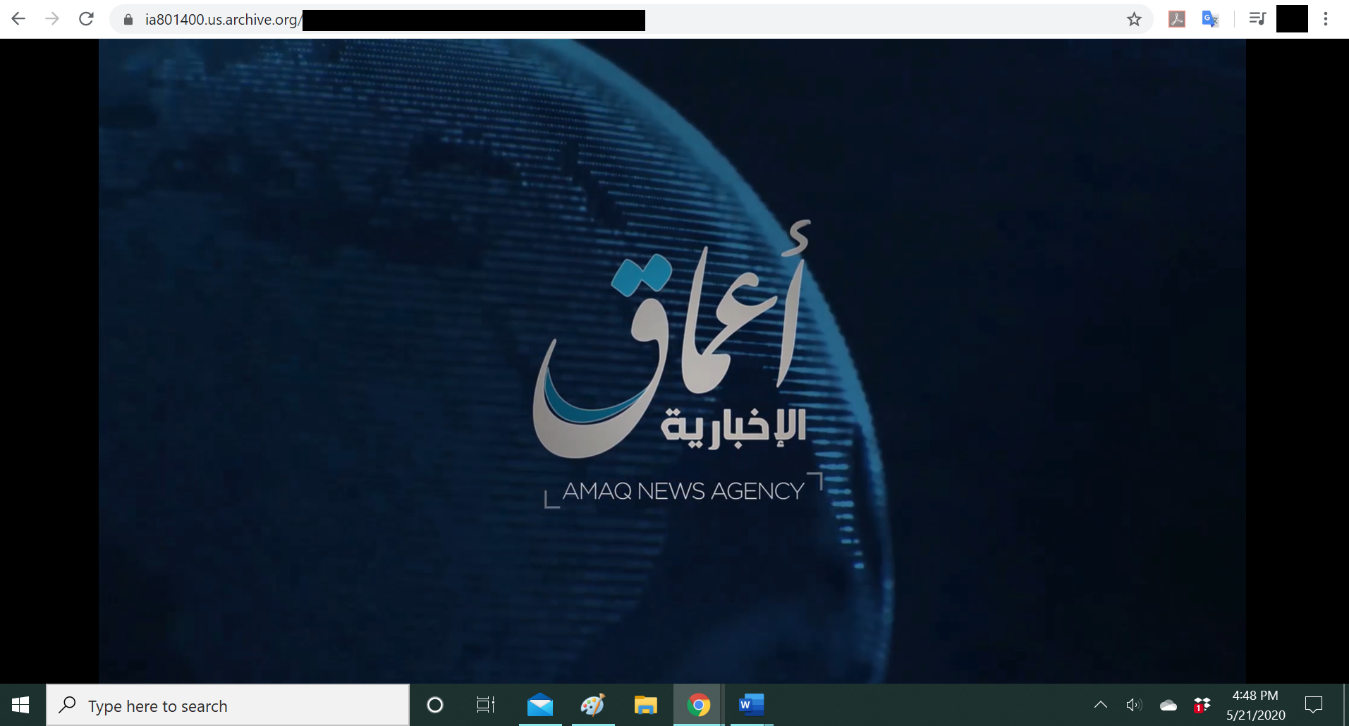 ISIS Amaq News video on the Internet Archive on May 21, four days after it was uploaded.

A pro-ISIS website on the .pw domain was located that was previously removed from the .info, .xyz, .win, .in, and .ru domains. The website contains violent ISIS propaganda videos, the terror group’s weekly newsletters, and daily Amaq News updates. Videos on the website include recent ISIS releases, and historical videos including those that show notorious executions. The pro-ISIS .pw domain website, like it’s previous versions, uses Cloudflare services. The website’s domain suffix has changed, but the name of the website has not.