The National Socialist Order, a neo-Nazi group, launched a website for spreading propaganda and supporting acts of white supremacist terrorism. Users of 4chan’s /pol board advocated for acts of violence against Canadian politicians in response to new Covid-19 vaccine mandates, as well as sharing a link for the video of the 2019 Christchurch terrorist attack. In addition, neo-Nazi Telegram channels posted an image calling for acts of violence against public health officials, instructions for making homemade detonators for explosive deceives, and links to websites that offer pirated software. Finally, a user on the main 8chan successor website justified violence against the government, liberals, and the left as a moral act.

The week of January 23 to January 29, CEP researchers located two ISIS Amaq News videos uploaded to multiple websites. The first video, released on January 23, shows ISIS terrorists preparing to escape during the Ghweran prison uprising in Hasakah, Syria. In addition to Telegram and Element, ISIS online supporters uploaded the video to at least 14 websites. Four days later, the video was only available on three websites: the Internet Archive, Upmlf.com, and the IPFS distributed web file system. The Internet Archive made the video only viewable to logged in members after CEP reported it.

The second video, released on January 24, allegedly shows ISIS fighters engaging in combat near the Ghweran prison. In addition to Telegram and Element, the video was uploaded to at least 13 websites. Three days later, the video was only available on two websites: the Internet Archive and the IPFS distributed web file system. The Internet Archive made the video only viewable to logged in members after CEP reported it.

Three other Amaq News videos were released on January 22 that included footage from the prison uprising. On January 20, ISIS fighters attacked the prison and Kurdish led Syrian Defense Forces (SDF), attempting to start a jailbreak. SDF troops reportedly regained control of the prison on January 26, however fighting continued in the vicinity. 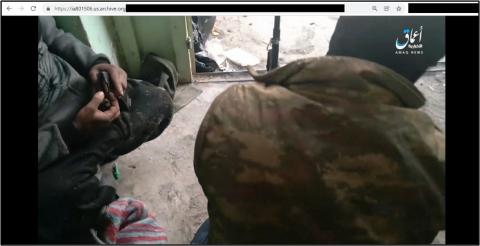 CEP researchers located a notorious ISIS bomb-making video on the Internet Archive instructing viewers to make explosive devices using commercially available products. This specific video has been linked to the May 2017 Manchester Arena bombing perpetrator, who killed 22 people and injured hundreds more. The video also encourages attacks in the West and shows knife tactics on a human target, who is brutally executed in the process. The video was uploaded on January 19, 2022. The Internet Archive swiftly removed the video after CEP reported it. The video has been found multiple other times on the Internet Archive, and in those cases, the site quickly removed it.

On January 26, the neo-Nazi group National Socialist Order launched a website on the surface web and dark web. In addition to reading lists, praise for white supremacist terrorists, and contact information, content on the website advocated for acts of violence against people of color, Jews, Muslims, politicians, the left, and attacks on the electrical infrastructure. The website was inaccessible three days after CEP contacted the site’s registrar, Internet.BS.

On January 24, 4chan’s /pol board users encouraged acts of violence against Canadian politicians and their families in response to Covid-19 vaccine mandates for truckers entering Canada. In a thread totaling over 300 posts, 4chan users made threats, stating that politicians should live in fear of acts of violence. The post, which referenced The Turner Diaries in the title, was accessible 72 hours later.

On January 25, 4chan’s /pol board users shared a link for the video of the 2019 Christchurch terrorist attack. The post contained a screenshot from the attack video and was still online 48 hours later. The previous week, users of the same 4chan board posted the 2011 Norway terrorist’s manifesto and encouraged further acts of violence.

On January 25, at least eight Telegram channels posted an image calling for acts of violence against public health officials. The picture indicated that violence was justified because of Covid-19 vaccines, abortion, health care services for LGBT people, and the opioid epidemic. The same image was previously circulated on Telegram in October 2021. Telegram’s Terms of Service prohibit using the service to “promote violence on publicly viewable Telegram channels.” Some of the same channels that posted the call to violence had previously shared dox information allegedly of CDC and FDA personnel. The first channel that reposted the image in January was removed by Telegram for violating the platform’s Terms of Service, but the message encouraging violence was still available on at least seven other channels.

On January 23, a neo-Nazi Telegram channel posted instructions for making a homemade detonator for an explosive device. An unknown individual created the channel on December 11 after Telegram removed a previous version. The channel endorses acts of terrorism and has previously posted links to bomb-making instructions on a file download website. The channel had over 235 subscribers on January 27. The detonator instructions, published as an image, have previously been located on other sites, including 4chan, in 2019.

Users of a neo-Nazi information and operations security chat posted links to websites that offer pirated software downloads through torrent files. The Telegram channel has previously supported violence and has posted a cybersecurity manual, a cryptocurrency guide, information on increasing privacy on smartphones, and advice on destroying or disabling surveillance cameras.

User on Main 8chan Successor Site Calls for Violence Against the Government, Liberals, and the Left

On January 25, a user on the main 8chan successor website stated that violence against the government, liberals, and the left, was “morally justified.” The poster stated that it was important for board members to know using lethal force when engaged in a “war” was legitimate.

On December 2, 2017, suspected Boko Haram suicide bombers killed 13 people and injured 53 others in a market in Borno State. The bombers struck as aid workers were distributing food to citizens.

The Syrian Democratic Forces (SDF), a Kurdish-led U.S. ally in the fight against #ISIS, said today it had “paused a… https://t.co/Tgah4eKbZO

An alleged neo-Nazi music producer and his two adult children are accused of stirring up racial hatred through musi… https://t.co/GAb2WUyp6o

The Taliban government defended its banning of FM radio broadcast from two U.S.-funded news media in Afghanistan, a… https://t.co/nudKT3y7VR

ICYMI: DHS this week raised concerns about potential threats to the LGBTQ, Jewish, and migrant communities from vio… https://t.co/YRfu0GNEjl

RT @GregoryPWaters: Also a return of technicals. ISIS truck fleet was heavily damaged in the regime's 2021 operations to the point they rep…