(New York, N.Y.) – The Counter Extremism Project (CEP) reports weekly on the methods used by extremists to exploit the Internet and social media platforms to recruit followers and incite violence. Last week, CEP researchers identified numerous examples of extremist content on Telegram, including numerous posts promoting violence against Asian-Americans with explicit imagery and text targeting people of Asian descent. Also, CEP researchers located a Pro-ISIS Tumblr blog, which posted propaganda and pro-ISIS chat links. Additionally, two uploads of an infamous ISIS bomb-making video on the Internet Archive were located. In addition, the fifteenth issue of the pro-ISIS publication “Voice of Hind” was released on multiple websites containing articles about alleged U.S. military human rights violations in Iraq and denouncing the government of Maldives for building closer relations with the governments of India and the U.S.

The week of April 11 to 17, CEP researchers located numerous examples of content on Telegram that encouraged violence against Asian-Americans. Anti-Asian propaganda included wartime footage of executions and photos of corpses from World War II and the Vietnam War with accompanying anti-Asian text, and neo-Nazi imagery encouraging attacks against people of Asian descent. Numerous Neo-Nazi and white supremacist Telegram channels have promoted violence against Asian-Americans since the beginning of the COVID-19 pandemic.

On April 14, the U.S. Senate advanced a bill that would improve public hate crime reporting mechanisms, require official guidelines to reduce racist language related to COVID-19, and create a post in the Department of Justice to review hate crimes linked to the pandemic. Anti-Asian hate crimes increased by 145% in 16 large U.S. cities in 2020.

On April 14, CEP researchers located a pro-ISIS blog on Tumblr. The page contained links to pro-ISIS chats on RocketChat and Matrix, links to videos, translated ISIS Amaq news statements, and links to ISIS propaganda publications on other websites. The website was entirely text-based and lacked pro-ISIS images. Members of ISIS, the group’s supporters, and their online propaganda network have previously used Tumblr to communicate and spread content.

On April 14, CEP researchers located two uploads of an infamous ISIS bomb-making video on the Internet Archive. The video shows how to manufacture the explosive TATP, used in several terrorist attacks in Europe. This specific video has been linked to the May 2017 Manchester Arena bomber, who killed 22 people and injured hundreds more. In addition to providing bomb-making instructions, the video encourages attacks in the West and shows knife tactics on a human target who is executed in the process. Both videos were uploaded by the same account in large sets of 26 and 52 violent ISIS videos, respectively. The video uploaded on March 23 had 80 views when CEP located it on the 14th, and the other video, uploaded on March 25, had 58 views. Both videos were removed quickly by the Internet Archive after being reported.

The fifteenth issue of the pro-ISIS web magazine “Voice of Hind” was released on numerous websites on April 16. The magazine is meant to appeal to Muslims in the Indian subcontinent and beyond. The fifteenth issue contained an article condemning alleged U.S. military human rights violations in Iraq and denouncing the Maldivian government for building closer relations with the governments of India and the U.S. The magazine also featured a biographical article of an ISIS fighter in the group’s self-proclaimed province in Jammu and Kashmir who was killed fighting with Indian security forces.

CEP researchers located several pieces of neo-Nazi and white supremacist content on Instagram. Videos included a clip from an infamous National Action propaganda video on the site for approximately 43 weeks and viewed over 100 times, and two identical videos containing still images originally from the Atomwaffen Division, both on the photo-sharing platform for three days with 14 and 71 views, respectively. A song praising the Christchurch attacker and using an image glorifying him was also located on the site, uploaded one week ago with over 220 views, and a recreation of the Christchurch attack in a videogame was on Instagram for six days with 140 views. 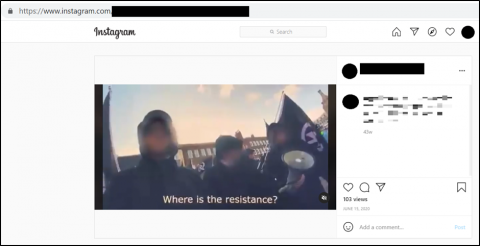 A clip from an infamous National Action video on Instagram (April 15, 2021)

A neo-Nazi Telegram channel was created on April 12 to spread downloadable white supremacist videogames. The four games uploaded in the first three days of operation include titles that allow the player to kill people of color, Jews, LGBT people, leftists, and journalists. Extremist games allow groups and individuals to advertise and spread ideology, encourage the dehumanization of their perceived opponents, portray violence as positive, and further spread propaganda.