(New York, N.Y.) – The Counter Extremism Project (CEP) reports weekly on the methods used by extremists to exploit the Internet and social media platforms to recruit followers and incite violence. Last week, white supremacist and extreme right online communities celebrated the March 16 shooting attacks at three massage parlors in and around Atlanta, Georgia, in which eight people were murdered. Additionally, white supremacists celebrated the second anniversary of the Christchurch terrorist attack on various Telegram chats and channels and imageboards on both the surface and dark web.

Meanwhile, the fourteenth issue of the pro-ISIS web magazine “Voice of Hind” was released and featured an article encouraging terrorist attacks on vehicles on highways and railroads. Finally, ISIS released a new propaganda video from its self-proclaimed Pakistan province that encouraged attacks against Shiites and the Pakistani government.

White supremacist and extreme right online communities celebrated the March 16 shooting attacks at three massage parlors in the Atlanta, Georgia metropolitan area in which eight people were murdered. Six of those killed were Asian-American women. Robert Aaron Long was arrested and charged with eight counts of murder and one count of aggravated assault.

Between March 16 and March 19, several white supremacist channels on Telegram posted propaganda dehumanizing people of Asian descent and praising the gunman. Users of a neo-Nazi Telegram chat used the opportunity to expressly advocate for violence against Asian-Americans, noting that whatever the gunman’s motivation, the murder of Asian-Americans was “always a good thing.” A Proud Boys affiliated media group mocked protests against anti-Asian violence in the aftermath of the attack, and users of a chat belonging to the media group promoted anti-Asian racism. Users of the main 8chan /pol successor forum praised the attack, while users of a white supremacist forum on the dark web promoted violence against Asian-Americans, with one user stating their hope that violence would lead to non-whites leaving Europe and the U.S.

White supremacists celebrated the second anniversary of the Christchurch terrorist attack on various Telegram chats and channels and imageboards on both the surface and dark web. Several white supremacist Telegram channels posted the video made by the attacker and memes praising his actions and calling for violence against Muslims. One channel forwarded related memes from one of the most notorious neo-Nazi Telegram channels, of which several versions Telegram has removed from the platform for violating their Terms of Service. Users of the main 8chan /pol successor forum, as well as posters on two white supremacist forums on the dark web, praised the attacker and encouraged further attacks.

A user on TikTok posted a one-year-old threatening image of a man wearing a skull mask and sunglasses outside one of the targeted Christchurch mosques. The threat was originally posted in a Telegram channel in March 2020. The image on TikTok was viewed over 17,000 times in approximately one week. Sam Richard Scott Brittenden pleaded guilty in a New Zealand court in July 2020 for failing to assist with a search warrant in relation to an investigation of the photo. TikTok did not remove the image after it was reported.

The fourteenth issue of the pro-ISIS web magazine “Voice of Hind” was released on March 17. The magazine is meant to appeal to Muslims in the Indian subcontinent and beyond. The recent issue featured an article encouraging terrorist attacks on vehicles on highways and railroads. Another article claimed that ISIS is doing well during the pandemic and economic crisis and has been launching more attacks in Iraq, Syria, Afghanistan, and throughout Africa. One writer was disappointed, stating that ISIS supporters in India only voice their support on social media but do not commit terrorist attacks. Another article encouraged attacks against Shiite Muslims. The magazine was spread by pro-ISIS propagandists on Telegram, Hoop, and the Internet Archive.

On Friday, March 19, ISIS released a new propaganda video from its self-proclaimed Pakistan province. The video encourages attacks against Shiites and the Pakistani government. The video also includes footage of the brutal murder of eleven men identified as Pakistani Hazara. ISIS announced its Pakistan province as an individual entity in May 2019. 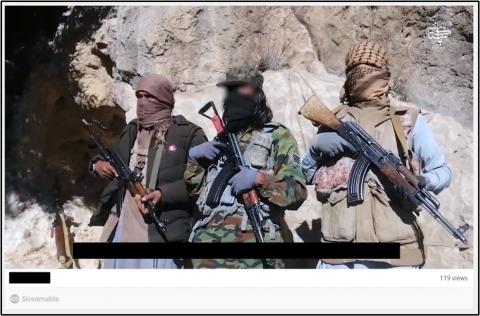