(New York, N.Y.) — The Counter Extremism Project (CEP) reports weekly on the methods used by extremists to exploit the Internet and social media platforms to recruit followers and incite violence. Last week, a neo-Nazi Telegram channel posted the alleged address of Centers for Disease Control (CDC) director Rochelle Walensky after the CDC said children ages 5-11 could get the Covid-19 vaccine.

Additionally, a day after the Kabul hospital attack, a pro-ISIS online propaganda group, Al-Murhifat Media, released a video celebrating the ISIS attack that left at least 25 people dead and many more injured. On Instagram, nine pro-ISIS and 11 neo-Nazi accounts were located. Also, a fascist acceleration website was relaunched and had the endorsement of American neo-Nazi James Mason.

On November 3, a neo-Nazi accelerationist Telegram channel posted what it alleged to be the home address of Centers for Disease Control (CDC) director Rochelle Walensky and the alleged address of her synagogue. The dox is directly related to the CDC’s recommendation that children aged 5 to 11 receive the Pfizer-BioNTech pediatric Covid-19 vaccine. It was shared by at least 10 additional Telegram chats or channels within two hours.

Multiple white supremacist and neo-Nazi Telegram channels have alleged that Covid vaccines kill the recipients, especially children, and view the vaccines as part of an anti-white plot perpetrated by Jews. The channel that originally posted the dox is part of a network of neo-Nazi accelerationist Telegram channels that advocate violence against law enforcement, Jews, Muslims, immigrants, people of color, LGBT people, and others. The network endorses the work of James Mason, neo-Nazism, and in some cases, the cultic group the Order of Nine Angles.

On November 3, the pro-ISIS online propaganda group, Al-Murhifat Media, released a video celebrating ISIS’s November 2 attack on Sardar Mohammad Daud Khan military hospital in Kabul, Afghanistan. At least 25 people were killed and over a dozen were injured in the attack, which included a suicide bombing, a vehicle-borne improvised explosive device, and an armed assault. According to the Taliban, a senior Taliban commander, Mawlawi Hamdullah Rahmani, was killed in the attack. The video included publicly available footage of the hospital assault taken by news crews and celebrated the killing of Rahmani.

ISIS claimed responsibility for the attack via the group’s Amaq news outlet. Amaq statements were released on Telegram, Hoop, RocketChat, and Element.

CEP researchers located nine pro-ISIS Instagram accounts the week of October 31 to November 6. The accounts posted various pro-ISIS content, including official video clips, the ISIS weekly publication al-Naba sections, Amaq news statements, nasheed videos, and unofficial pro-ISIS graphics. The nine accounts had an average of 306 followers, with a range between 35 and 860. The first piece of extremist content on each account was posted between one and 187 days before CEP located it, with an average of 37 days. Seven of the nine accounts were still online three days after they were reported by CEP.

CEP also located 11 Instagram accounts that posted neo-Nazi, white supremacist, or fascist content. Three accounts posted videos or photos supporting the Atomwaffen Division, Rise Above Movement inspired active clubs, or Patriot Front. Other content also included support for the Christchurch terrorist attack, racist and antisemitic memes, Holocaust denial literature, and white supremacist videos. The 11 accounts had an average of 178 followers with a range between 23 and 505. The first piece of extremist content on each account was posted between nine and 129 days before CEP located it, with an average of 46 days. All 11 accounts were still online three days after they were reported by CEP and it there was no evidence that any content was removed by Instagram. 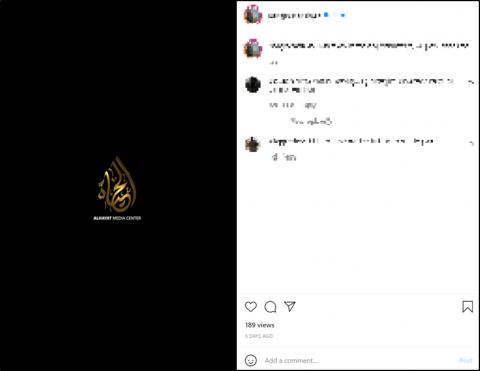 On November 4, a fascist accelerationist website relaunched with an endorsement from the notorious American neo-Nazi James Mason. The first posts on the site were originally made in October, however, the dates on the articles were changed to November 3 prior to the relaunch. Mason read a short statement endorsing the website on the blockchain-based video streaming site Odysee. An advertisement for SimpliSafe Home Security played on Odysee before the Mason video. The website claims to promote skill development and seeks to turn their readership into fascist “revolutionaries.”

The site is linked to a second, older website that spreads Mason’s work and contains writings by several former members of the Atomwaffen Division and current National Socialist Order (NSO) members. Both websites list AWD members, one member of the neo-Nazi group The Base, and a white supremacist imprisoned for a mail bombing as “prisoners of war.” The site was created on September 20 and uses Enom as its registrar and VanwaTech as its name server.