The Rise Above Movement (RAM), founded in 2017, is a white supremacist gang based in Southern California that calls itself the “premier MMA (mixed martial arts) club of the Alt-Right.”*Karim Zidan, “RAM’s revival and the ongoing struggle against MMA’s far-right fight clubs,” Guardian (London), November 27, 2019, https://www.theguardian.com/sport/2019/nov/27/rams-revival-and-the-ongoing-struggle-against-mmas-far-right-fight-clubs.x RAM co-founder Robert Rundo said he and Ben Daley founded RAM because they did not see a place for themselves in the far-right movement at the time, condemning the alt-right movement for “playing dress-up.”*“Guidelines2Rise - Starting your crew,” YouTube video, 10:46, posted July 26, 2020, by “Media 2Rise,” https://www.youtube.com/watch?v=DFq6IkruUDQ.x According to Rundo, they wanted a group that would reach beyond online forums. He looked to European groups such as Generation Identity that were doing banner drops, demonstrations, and physical training.*“Guidelines2Rise - Starting your crew,” YouTube video, 10:46, posted July 26, 2020, by “Media 2Rise,” https://www.youtube.com/watch?v=DFq6IkruUDQ.x RAM members have engaged in violence at multiple rallies since 2017, including that year’s the Unite the Right rally in Charlottesville, Virginia.*Nathaniel Percy, “2 more Rise Above Movement members, from the South Bay, plead guilty to federal riot charges,” Daily Breeze, May 3, 2019, https://www.dailybreeze.com/2019/05/03/remaining-2-rise-above-movement-members-plead-guilty-to-federal-riot-charges/.x

RAM members have been involved in physical assaults at protests in California and Charlottesville, Virginia. RAM sent members to the August 2017 “Unite the Right” rally in Charlottesville, Virginia, after which co-founder Daley and three other members were charged with conspiracy to riot. All four pled guilty in 2019.*Nathaniel Percy, “2 more Rise Above Movement members, from the South Bay, plead guilty to federal riot charges,” Daily Breeze, May 3, 2019, https://www.dailybreeze.com/2019/05/03/remaining-2-rise-above-movement-members-plead-guilty-to-federal-riot-charges/.x The U.S. Department of Justice has noted that RAM, a “white supremacy extremist group,” has used the Internet “with the intent to organize, promote, encourage, participate in, or carry on riots.”*“Four Local Members of White Supremacy Group Face Federal Charges in Attacks at Political Rallies across California,” U.S. Department of Justice, October 24, 2018, https://www.justice.gov/usao-cdca/pr/four-local-members-white-supremacy-group-face-federal-charges-attacks-political-rallies.x

After Daley pled guilty in 2019 to rioting charges, RAM was considered defunct, according to court documents.*Nathaniel Percy, “2 more Rise Above Movement members, from the South Bay, plead guilty to federal riot charges,” Daily Breeze, May 3, 2019, https://www.dailybreeze.com/2019/05/03/remaining-2-rise-above-movement-members-plead-guilty-to-federal-riot-charges/.x In June 2019, a federal judge dropped charges against Rundo and two other and two other RAM members in a separate case involving violent rioting.*Fred Schuster, “Charges Dismissed Against Reputed Members of a SoCal White Nationalist Group,” NBC 4 Los Angeles, June 4, 2019, https://www.nbclosangeles.com/news/white-nationalists-charges-dismissed-los-angeles-california-political-rally-brawl/148465/.x In March 2021, the 9th U.S. Circuit Court of Appeals reinstated rioting charges against Rundo.*“Riot charges reinstated against California white supremacist,” Associated Press, March 4, 2021, https://apnews.com/article/donald-trump-race-and-ethnicity-san-bernardino-riots-california-dd1dbf5bb9d2648b51acb1c48c1e24ec.x RAM began a new recruitment drive online in celebration of its 2019 legal victory.*“Four Local Members of White Supremacy Group Face Federal Charges in Attacks at Political Rallies across California,” U.S. Department of Justice, October 24, 2018, https://www.justice.gov/usao-cdca/pr/four-local-members-white-supremacy-group-face-federal-charges-attacks-political-rallies; Karim Zidan, “RAM’s revival and the ongoing struggle against MMA’s far-right fight clubs,” Guardian (London), November 27, 2019, https://www.theguardian.com/sport/2019/nov/27/rams-revival-and-the-ongoing-struggle-against-mmas-far-right-fight-clubs.x The group has since found new life on various online platforms. A February 2019 post on Gab declared RAM is “coming back stronger than ever.”*Rise Above Movement, Gab post, February 23, 2019, https://gab.com/RiseAboveMovement/posts/9936855049513675.x Rundo was reportedly living in Europe as of 2020. Serbia expelled him from the country in February 2021 and he allegedly fled to Bosnia and Herzegovina, where authorities were searching for him as of that March. Rundo continued to appear on RAM podcasts in Bosnia.*Irvin Pekmez, “Bosnian Police Hunt for Wanted US Far-Right Activist,” Balkan Insight, March 30, 2021, https://balkaninsight.com/2021/03/30/bosnian-police-hunt-for-wanted-us-far-right-activist/.x

RAM was co-founded by Robert Rundo and Ben Daley. 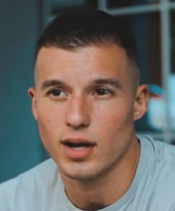 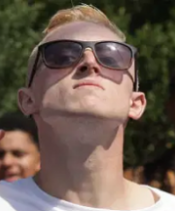 RAM’s logo consists of a medieval sword in a stone against the backdrop of an evergreen tree against a diamond.*Rise Above Movement, Gab account, accessed October 7, 2020, https://gab.com/RiseAboveMovement.x The sword imagery evokes the Crusades and RAM has also carried Crusader flags during rallies.*A.C. Thompson, Ali Winston, and Darwin BondGraham, “Racist, Violent, Unpunished: A White Hate Group’s Campaign of Menace,” ProPublica, October 19, 2017, https://www.propublica.org/article/white-hate-group-campaign-of-menace-rise-above-movement.x RAM utilizes social media to spread its propaganda. The group has been banned from Twitter, Facebook, Instagram, and YouTube, but maintains a presence on Gab and Telegram.*Brianna Sacks, “The Neo-Nazi Fight Club Named In The Charlottesville Arrests Is On The "Cutting Edge" Of Peddling White Supremacy,” BuzzFeed News, October 2, 2018, https://www.buzzfeednews.com/article/briannasacks/ram-white-supremacy-group-charlottesville.x As of October 7, 2020, RAM had 965 followers on Gab.*Rise Above Movement, Gab account, accessed October 7, 2020, https://gab.com/RiseAboveMovement.x That number increased to 971 by January 6, 2021,*Rise Above Movement, Gab account, accessed January 6, 2021, https://gab.com/RiseAboveMovement.x and slightly decreased to 965 as of April 13, 2021.*Rise Above Movement, Gab account, accessed April 13, 2021, https://gab.com/RiseAboveMovement.x

RAM also partnered with the far-right clothing retailer Our Fight Clothing Co. to produce RAM-branded clothing. The company’s website shut down as of July 2019 and RAM began selling clothing through the Will2Rise website. Will2Rise claims all products are made in Eastern Europe so that only nationalists “of like mind touch” their products.*Rise Above Movement, Gab post, July 21, 2019, https://gab.com/RiseAboveMovement/posts/102478106967953280; “Our Mission,” Will 2 Rise, accessed October 7, 2020, https://www.will2rise.com/elements/pages/about/.x Will2Rise also purports proceeds go to support imprisoned RAM members, which RAM refers to as prisoners of war.*“Our Mission,” Will 2 Rise, accessed October 7, 2020, https://www.will2rise.com/elements/pages/about/; Rob Rundo, “The International Nationalists,” Media 2 Rise, August 21, 2020, https://media2rise.com/2020/08/21/the-international-nationalists/.x International allies of RAM have unveiled a campaign called “Free RAM,” which calls for the release of RAM’s so-called political prisoners who were allegedly only defending themselves against Antifa.*Rob Rundo, “The International Nationalists,” Media 2 Rise, August 21, 2020, https://media2rise.com/2020/08/21/the-international-nationalists/.x Will2Rise provides a customer service contact address and phone number based in Queens, New York.*“Connect,” Will2Rise, accessed April 13, 2021, https://will2rise.com/elements/pages/contact/.x