(New York, N.Y.) – The Counter Extremism Project (CEP) reports weekly on the methods used by extremists to exploit the Internet and social media platforms to recruit followers and incite violence. Last week, a neo-Nazi group celebrated Coleman Thomas Blevins, who was apprehended by law enforcement in Texas for reportedly planning a mass shooting. Officials found firearms, neo-Nazi and fascist flags, and books, including The Turner Diaries, on Blevins’ property.

CEP researchers also found multiples instances of the ISIS video “Makers of Epics 3” online, including through Telegram, Hoop, and RocketChat. Lastly, a neo-Nazi Telegram channel circulated a guide to its followers for the anonymous purchase of cryptocurrency and a website utilizing services from the webhosting company Epik was found to be selling white supremacist t-shirts.

The week of May 30 to June 5, a Telegram channel belonging to an online accelerationist neo-Nazi group celebrated an alleged member, Coleman Thomas Blevins, who was reportedly planning a mass shooting at a local Walmart. Blevins was arrested on May 27 after allegedly transmitting a threat. Law enforcement officers found firearms, neo-Nazi and fascist flags, and books, including The Turner Diaries, on Blevins’ property. The Turner Diaries is a 1978 novel about the overthrow of the U.S. government and genocide of non-whites that remains popular with many white supremacists. Blevins also had various religious texts and flags indicating an interest in Russian Orthodoxy and Islam. Blevin’s suspected target is notable in part due to the similarity to the August 3, 2019 attack at a Texas Walmart allegedly by white supremacist Patrick Crusius who killed 23 people and injured 23 more.

The neo-Nazi group, which claims to be an alternative 12-step program, claims to seek to recruit individuals recovering from substance addiction, openly endorses violence, racism, misogyny, and antisemitism, and has praised members for their commitment to accelerationism. A video on their Telegram channel stated that “Every granule of dope that went into your arm will be transfigured into ballistic ordnance.” The Telegram channel was created on February 1, 2021, and had over 300 subscribers on June 3. Since Blevins’ was taken into custody, the group’s Telegram channel has posted over a dozen news articles about the arrest and glorified Blevins. On June 2, the channel announced that they were allied with the Feuerkrieg Division, who had recently allegedly restarted their public Telegram channel. The group has also previously praised and shared content from the National Revival Movement, who claimed on Telegram on June 3 that they were disbanding.

CEP researchers continued to find active links for the ISIS video “Makers of Epics 3,” originally released on May 28. The video, from the group’s self-proclaimed Iraq province, mainly consisted of execution footage and the destruction of farmland. It contained extensive footage of nighttime executions allegedly near Tikrit of men accused of being spies, police officers, tribal leaders, or working for the government in other capacities. The video also showed the bodies of men identified as Kurdish fighters, depicted the burning of farms allegedly owned by Shia, and the destruction of farm equipment and vehicles. The video concluded with footage of an execution of a man identified as a police officer in Diyala province and an attack against a wheeled vehicle. 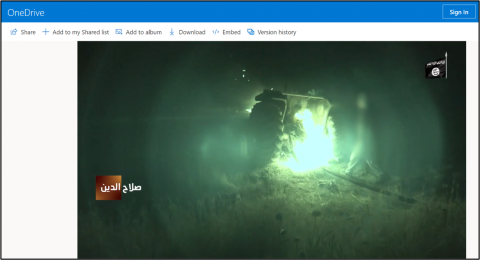 On May 30, a prominent neo-Nazi Telegram channel dedicated to information and operations security released a guide for the anonymous purchase of cryptocurrency. The guide includes links to websites and instructions. The channel admins maintain a site on the dark web. The Telegram channel had over 8,000 subscribers as of June 3. The channel has previously endorsed violence and has posted a cybersecurity manual and information on increasing privacy on smartphones, how to archive online content, and how to destroy or disable surveillance cameras.

CEP researchers located an online privacy-centered clothing brand that sells white supremacist t-shirts. Clothing on the site included shirts praising American neo-Nazis such as George Lincoln Rockwell of the American Nazi Party, Joseph Tommasi of the National Socialist Liberation Front, and Robert Matthews of the violent white supremacist group The Order. The website uses Epik as its name server and registrar. Epik has previously provided web services for several extreme right-wing sites, including 8chan and a website that promotes the work of James Mason and the Atomwaffen Division and National Socialist Order.