(New York, N.Y) - The Counter Extremism Project (CEP) reports weekly on the methods used by extremists to exploit the Internet and social media platforms to recruit followers and incite violence. Last week, 10 or more neo-Nazi and white supremacist accelerationist Telegram channels were either deleted or removed from the platform. In addition, ISIS released a new video, “The Epic Battles of Attrition 3,” from the group’s self-proclaimed “Barakah province” in western Syria. CEP researchers also located the release of the fifth issue of the pro-ISIS web magazine, “Voice of Hind,” meant to appeal to Muslims in the Indian subcontinent and beyond, and the administrator of a pro-ISIS RocketChat chatroom urged followers to adhere to a code of online etiquette and operational security. Meanwhile, a longstanding and notorious pro-ISIS website changed cryptocurrency donation requests from Bitcoin to the Monero cryptocurrency, and users on the main 8chan successor website advocated for acts of white supremacist violence in response to a perceived decline of white institutional power in the U.S. Finally, CEP researchers located two copies of James Mason’s Siege, and a copy of an Order of Nine Angles (O9A) affiliated text on the self-publishing, print-on-demand website Lulu.

Melzer is accused of revealing sensitive information to followers of O9A and plotting an attack on his fellow soldiers while deployed overseas. The New York Times reported that Melzer communicated with followers of O9A through Telegram.

One of the channels that were removed had over 5,900 members and was regarded as one of the most notorious neo-Nazi propaganda outlets on Telegram. The channel routinely called for acts of violence and terrorism against the U.S. government, Jews, people of color, the LGBT community, activists, and others. The channel also frequently posted material praising groups such as the Atomwaffen Division and The Base. On June 22, the channel posted an O9A image. O9A is a left-hand path Satanic cult that endorses violence and has ties to neo-Nazi groups and movements.

On June 24, ISIS released a new video titled “The Epic Battles of Attrition 3” from the group’s self-proclaimed ‘Barakah province’ in Syria. The video contains previously released footage of ISIS hit and run attacks as well as extensive footage of ISIS executing men identified as Kurdish fighters and those accused of helping them. The video concludes with a tally of casualties and damage that ISIS claimed to have inflicted on its province between August 2019 and May 2020. 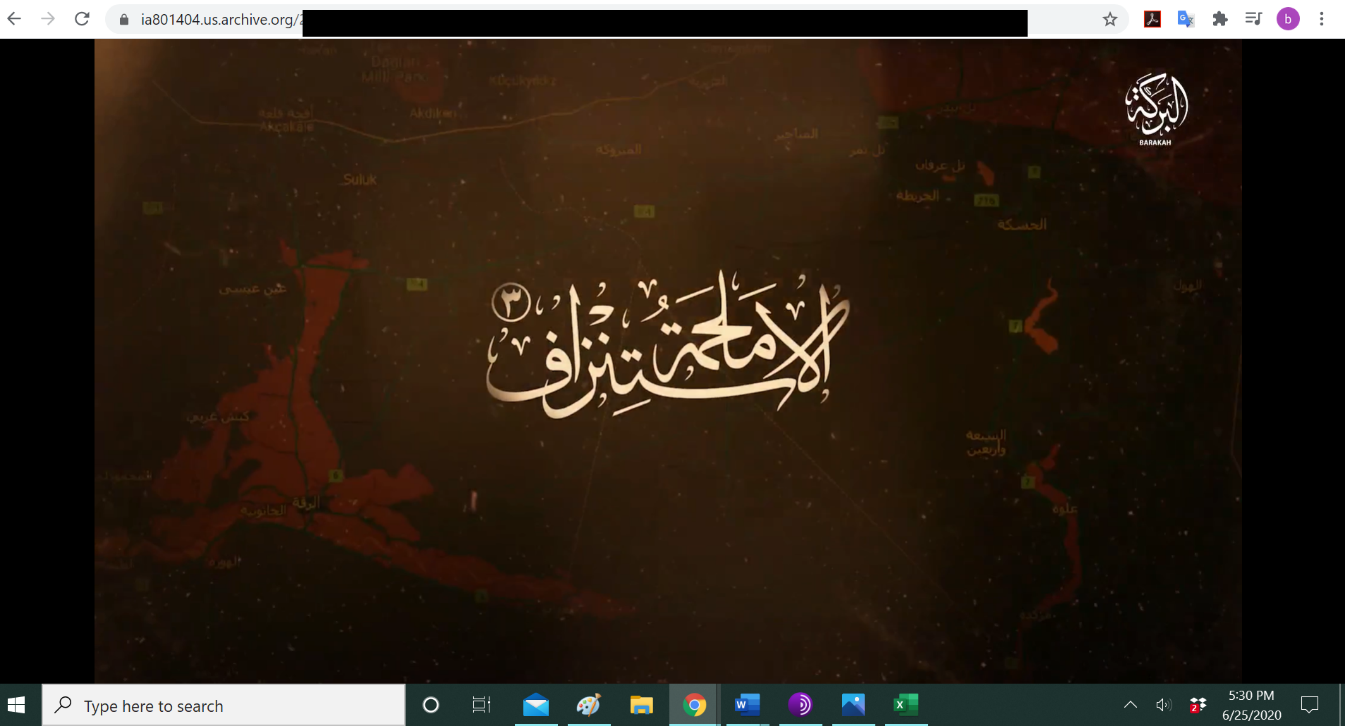 The fifth issue of the pro-ISIS web-magazine “Voice of Hind” was released on June 22 on various websites. The magazine is meant to appeal to Muslims in the Indian subcontinent and beyond. The fifth issue contained an article advocating for violence against non-Muslims, as well as a pep talk urging readers to engage in ISIS media work and defend ISIS from what are described as false accusations. An additional article claimed that ISIS is the only legitimate organization fighting against the West and Western-backed governments and criticized al Qaeda and the Taliban for abandoning what is described as the correct path. The magazine also contained a recent translated speech from ISIS’s official spokesperson Abu Hamza al-Qurashi.

On June 24, the administrator of a pro-ISIS RocketChat chatroom urged followers to adhere to a code of online etiquette and operational security. The admin advised users to defend ISIS’s reputation, spread propaganda, including news reports, videos, and statements, and dispute anti-ISIS rumors. The admin warned chatroom participants not to speak up for other users, ask for personal information, spread lies, or speak about traveling to ISIS-controlled territories and cautioned users not to trust any other user online, especially anyone who claims to speak for ISIS or claiming to be a fighter, or expressing a desire to commit an attack. The admin’s suggestions were similar to those given in the ISIS October 2018 propaganda video “Inside the Caliphate 8,” which directly addressed conduct among online ISIS supporters.

On June 21, a longstanding and notorious pro-ISIS website changed cryptocurrency donation requests from Bitcoin to the Monero cryptocurrency. The site stated that it was switching to Monero because it offers more privacy and safety features than Bitcoin. The website also provided instructions for sending money via Monero. Monero claims to be an untraceable cryptocurrency, using untraceable blockchains. Monero preserves both the anonymity of the sender and the receiver.

The website, which has previously been available on both the surface and dark web, serves as an ISIS propaganda depository and contains videos, official statements, photo sets, and news propaganda. The site is also a place where pro-ISIS users exchange comments and links.

On June 20 users on the main 8chan successor website advocated for acts of white supremacist violence in response to protests and the perceived decline of white institutional power in the U.S. The user stated that non-violent acts such as protests and strikes are ineffective and that whites would be portrayed as aggressors no-matter-what, making violence both advantageous and necessary. Of the 24 responses to the post, 16 were positive, three were neutral, and five were negative. Positive responses included users agreeing with the use of violence or the tone of the original poster. Neutral posts included users who did not argue against violence, and negative posts were composed of users who stated that violence should not be used.

8chan’s politically incorrect board was notorious for advocating for white supremacist violence. Three mass shooters, Brenton Tarrant, John Earnest, and Patrick Crusius, who all chose their targets based on race, religion, or ethnicity, posted manifestos on the site before their crimes. Cloudflare ceased providing services to 8chan in August 2019. The 8chan successor website that the post was located on uses Eranet as its registrar and Vanwanet as its name server.

On June 25, CEP researchers located two copies of James Mason’s Siege, and a copy of an O9A affiliated text on the self-publishing, print-on-demand website Lulu. Lulu has previously removed copies of Siege after the content was reported, in April 2019, and very recently in May/June 2020. Both of the newly located Siege entries were added to Lulu on June 20, 2020. Copies of Siege were removed from Lulu’s website on June 1, 2020 after CEP researchers reported them for violating the website’s Content Policy. Lulu specifically prohibits material that encourages harm, threats, harassment, intimidation or discrimination against people “based solely on race, ethnicity, national origin, sexual orientation, gender and gender identity, (or) religious affiliation.” Mason has substantial ties to the Atomwaffen Division, and his work is posted on a website that features the writing of several of the group’s members.

CEP researchers also located an Order of Nine Angles (O9A) text, which advocates for neo-Nazism, sexual violence, and mass lone-actor violence in order to inspire copycats. The O9A text was added to Lulu on June 21, 2020.