(New York, N.Y.) – The Counter Extremism Project (CEP) reports weekly on the methods used by extremists to exploit the Internet and social media platforms to recruit followers and incite violence. CEP researchers found that white supremacist accelerationists and neo-Nazis have been celebrating violence between Minneapolis police and protesters on several Telegram channels and chan imageboards. In addition, last week CEP researchers located a new website dedicated to glorifying and spreading the work of neo-Nazi James Mason.

White supremacist accelerationists and neo-Nazis celebrated clashes between protesters and police around the U.S. in the last week of May, hoping that it would further inflame tensions. Protests began in Minneapolis following the brutal videotaped killing of an African American man, George Floyd, by a white police officer. One particularly violent neo-Nazi accelerationist Telegram channel with over 5,500 members advised that a large protest would be a good opportunity to commit a murder. Another accelerationist neo-Nazi channel claimed that now was the time to attack synagogues, while emergency services are dealing with protests and civil unrest. Other Telegram channels and users of chan imageboards expressed their hopes that clashes between protestors and police would set off waves of racial violence and further civil disturbance. A white supremacist Telegram channel was created to specifically share news about the protests, mirroring Telegram posts from a popular civil rights channel, while making it possible for users to obtain the news without subscribing to a source that supports the protests. Numerous white supremacist Telegram channels, social media accounts, and chan imageboard users recently celebrated the murder of Ahmaud Arbery.

CEP researchers located a new website that seeks to spread the work of the neo-Nazi James Mason. The website contains essays and electronic books, and claims to exist for the sole purpose of spreading Mason’s work. Essays on the site focus on the topics of a race war, fascism, and how to choose, maintain, and sharpen knives. Many essays on the website were originally posted on the Siege Culture website, which has not been updated since February 2020. The website contains a variety of electronic books including Siege, the anti-Semitic hoax The Protocols of the Learned Elders of Zion, Mein Kampf, and books by the founder of the fascist Iron March web forum.

While the website states that it is not affiliated with the Atomwaffen Division (AWD) which claims to have disbanded, the site contains writings by several of the group’s current or former members, including AWD’s co-founder Brandon Russell, and a pseudonym for John Cameron Denton. Both Russell and Denton’s pseudonym are listed as “staff” for the website. Russell is currently serving a five year prison sentence for possession of explosives, and Denton is awaiting trial for conspiracy to commit an offense against the United States and interstate threats to injure. The website also contains a tribute to two AWD members, Jeremy Himmelman and Andrew Oneschuck, who were murdered by their roommate and fellow AWD member Devon Arthurs.

The website has a page on the Gab social network and Mason has promoted it on a video channel that he operates. The website uses Epik as its registrar and name server. Epik has previously briefly provided services to 8chan, as well as a website dedicated to spreading the video of the March 15, 2019 Christchurch terror attack and the attacker’s manifesto.

On May 28, ISIS’s official spokesperson Abu Hamza al-Qurashi released an audio statement calling the coronavirus divine punishment and urging more attacks in Iraq and around the world. Al-Qurashi stated that the coronavirus was punishment for those who fought against ISIS and stated that only God could stop the pandemic. He also commented that countries spent a great deal of money fighting ISIS, and now their economies were failing due to coronavirus associated lockdowns. Al-Aurashi criticized the closing of mosques, condemned the Taliban for negotiating with the U.S., and called for additional attacks around the world. 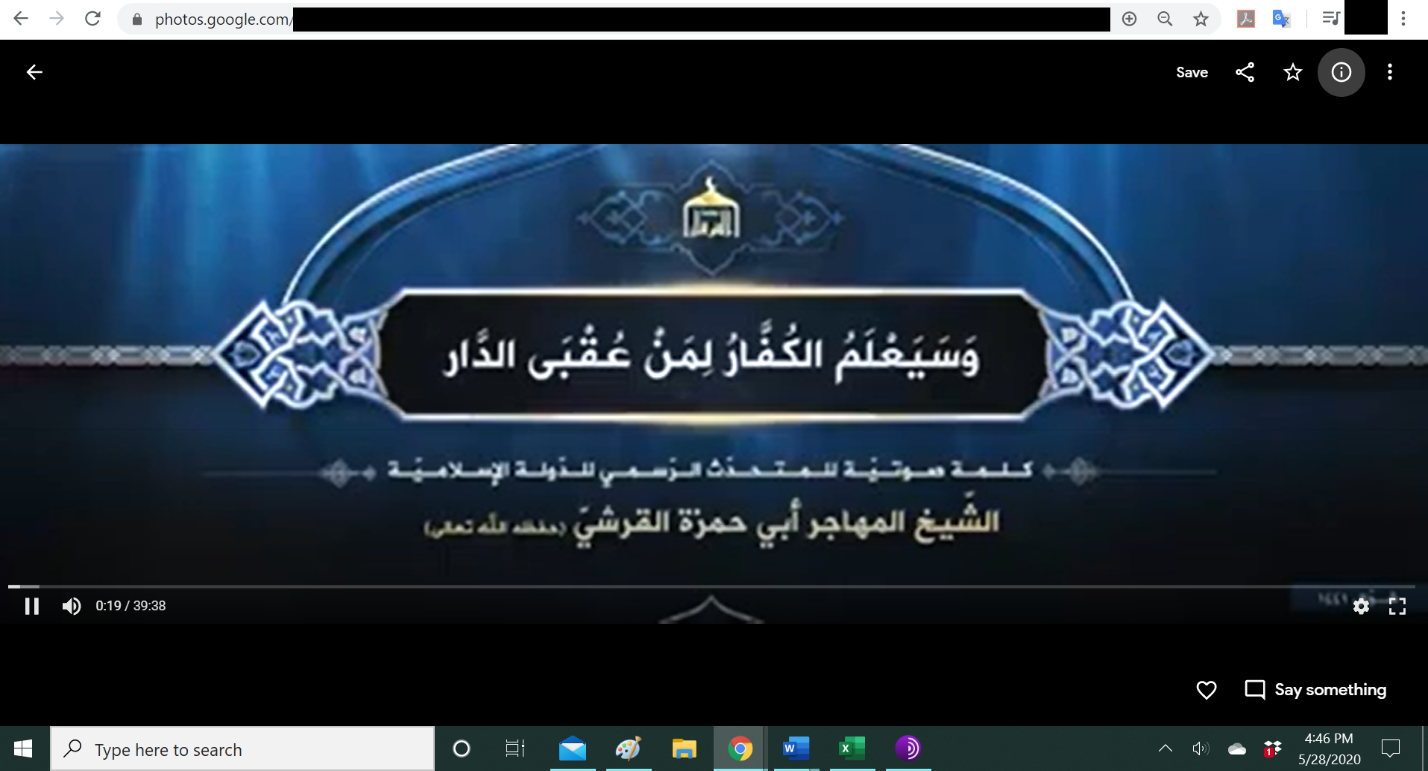 ISIS al-Furqan release on Google Photos approximately four hours after it was uploaded, May 28

On May 23, the fourth issue of the pro-ISIS “Voice of Hind” magazine was released. The magazine is meant to appeal to Muslims in the Indian subcontinent and beyond. The latest edition praised continued attacks by ISIS, claiming that it showed the group has not been defeated. Another article urged Muslims in India to support ISIS, stating they needed to avenge attacks on mosques and Muslims. The magazine also addressed ISIS fighters in the Maldives, and urged them to commit further acts of violence. The magazine was released on RocketChat, Hoop, and the Internet Archive.

The pro-ISIS tech group Electronic Horizons Foundation (EHF) launched a new web magazine dedicated to cyber and information security. The 24-page issue includes articles on security for smart phones, and on the Android and iOS operating systems, as well as basic internet security practices. The magazine advised on using alternate operating systems, and how to install them. Other articles advised using Tor and a VPN to hide IP addresses, and warned readers about privacy issues while using social media websites.

EHF was created in 2016 in order to provide cybersecurity and web technical assistance to ISIS supporters. The group currently operates several points of communication and releases a semi-regular tech bulletin. The magazine was released on the Internet Archive, Next Cloud, and the EHF website. The EHF site uses Cloudflare as its name server.

CEP researchers located recent posts praising the Christchurch terror attack on an 8chan successor website. The thread contained Brenton Tarrant’s manifesto, and sections from the attack video. Several posters on the forum had IP addresses located in New Zealand (it is possible that they were using a VPN to hide their location). The chan imageboard is located on the .Tw domain and uses Cloudflare as its domain server.