(New York, N.Y.) — The Counter Extremism Project (CEP) reports weekly on the methods used by extremists to exploit the Internet and social media platforms to recruit followers and incite violence. Last week, on the anniversary of Kristallnacht, the Barnes & Noble website started selling a neo-Nazi publisher’s version of Henry Ford’s notorious antisemitic book The International Jew. Separately and on the same day, the successor organization to the National Socialist Order (NSO), released a propaganda and recruitment video. A videogame mod made by white supremacists was released for the indie game Project Zomboid that allows users to kill African Americans.

On November 9, the anniversary of the failed 1923 Beer Hall Putsch and Kristallnacht, the Barnes & Noble website and a white supremacist website made a neo-Nazi publisher’s four-volume version of Henry Ford’s notorious antisemitic book The International Jew available for sale. The International Jew is an infamous antisemitic work alleging a secret Jewish conspiracy to take over the United States. The text references the hoax The Protocols of the Learned Elders of Zion. This earlier antisemitic work is one of the modern era’s most well-known pieces of antisemitism.

Promoting antisemitism in the Barnes & Noble book description, the publisher wrote that “Henry Ford legitimized ideas that are still true today.” The books contained artwork by a white supremacist illustrator who has made antisemitic, racist and anti-LGBT propaganda and content for several groups, including Patriot Front, Rise Above Movement-inspired active clubs and the Nationalist Social Club. The publisher, named for a term referring to the Ku Klux Klan, states on their Telegram account that they endorse national socialism.

The successor organization to the National Socialist Order (NSO) released a propaganda video on November 9, the anniversary of the 1923 Beer Hall Putsch and the anniversary of Kristallnacht, that shows their members firing rifles and advertises the group’s recruitment contact. The group was announced in September after their leader accused adherents of the Order of Nine Angles (O9A) of taking over the NSO. The group has called for the “elimination” of Jews, people of color, and LGBT people. 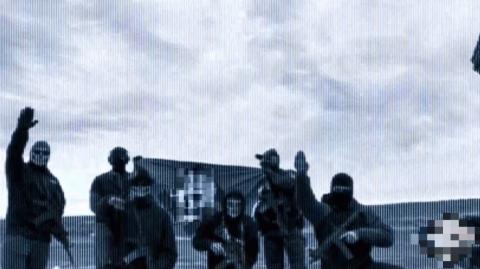 On November 7, a group released a white supremacist mod for the indie videogame Project Zomboid that allows the user to kill African Americans. The mod, made by an unknown group, is unaffiliated with the game’s creators. The mod’s Telegram channel, which has over 120 followers, includes racist and antisemitic content and a video of a police officer shooting and killing an African American man in Baltimore. The mod’s creators stated on Telegram that it was important to spread their ideology through games. An account claiming to be Nathan Damigo, the founder of the white supremacist group Identity Evropa, promoted the mod online.

ISIS released a new propaganda video on November 5 from the group’s self-proclaimed Central Africa province. The video shows ISIS fighters performing drills and includes a history of recent ISIS-claimed attacks in Congo. The video also includes extensive photos of casualties among security forces fighting against ISIS in the region and the destruction of villages by ISIS forces. The video concludes with the execution of a man accused of spying on behalf of Congolese troops in Beni.

On November 8, CEP researchers located a pro-ISIS explosives guide on JustPaste.It and MediaFire. The instructions, written in Russian, were a translation of content previously found on JustPaste.It in May, for the homemade synthesis of TNT. The pro-ISIS al-Saqri Foundation created the guide, which has published manuals over several years on the manufacture and use of explosives, poisons, and other weaponry. Both JustPaste.It and MediaFire removed the file after CEP reported it.

In a sample of content located on Meta-owned Instagram on November 8, CEP located 10 accounts that posted a variety of pro-ISIS content including clips and photos from official ISIS videos and pro-ISIS posts. In addition, 10 extreme right accounts that posted various white supremacist, antisemitic, Holocaust denial, anti-Muslim and anti-LGBTQ content were also located. Among the extreme right profiles, one account was for a regional chapter of a Rise Above Movement (RAM) inspired active club, which had over 120 followers. Three other accounts also promoted the active club movement and a clothing brand operated by RAM’s co-founder. The pro-ISIS accounts had between 46 and 919 followers, with an average of 342 followers. The extreme right accounts had between 44 and 534 followers, with an average of 205.

Among the pro-ISIS content, CEP located a clip from the ISIS video “Al-Ramadi: The Epic Battles of Jihad,” originally released in October 2015. 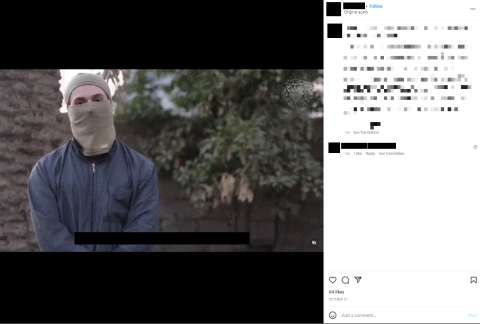 Clip from the ISIS video “Al-Ramadi: The Epic Battles of Jihad,” on Instagram. Screenshot taken on November 8, 2022

The footage features a statement from the British ISIS fighter, Fatlum Shakalu, a.k.a Abu Musa al-Britani, about the importance of fighting before detonating a vehicle rigged with explosives during ISIS’s assault on Ramadi. The video was uploaded to Instagram on October 27, 2022 and had 64 likes 12 days later. An ISIS logo on the top right of the video was obscured in the video upload to evade removal.

An extreme right account with 76 followers posted an infamous propaganda video from the British neo-Nazi group National Action. The video was uploaded to Instagram on September 29, 2022 and had 20 likes when it was found on November 8. In 2018, the British Home Affairs Committee criticized YouTube for its failure to prevent uploads of the same propaganda video. 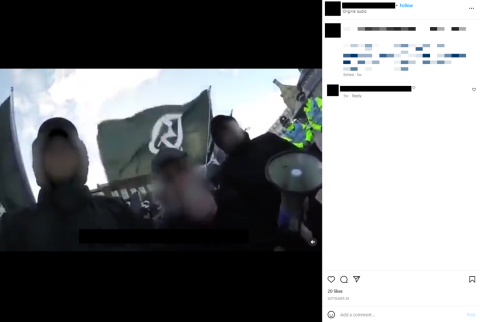