(New York, N.Y.) — The Counter Extremism Project (CEP) reports weekly on the methods used by extremists to exploit the Internet and social media platforms to recruit followers and incite violence. The video made by the perpetrator of the Buffalo racist massacre and his alleged manifesto were widely spread online and supported, amplified, or debated by different parts of the extreme and far-right. Also, last week, a neo-Nazi periodical was sold on both Amazon and Barnes & Noble’s websites. On the bulletin board-style website JustPaste.It, a pro-ISIS group posted a guide for making homemade explosives. Neo-Nazis posted information on making explosives in a Telegram chat. In addition, on Telegram, a channel connected to the neo-Nazi Nationalist Social Club posted the work email addresses and phone numbers of public-school employees in Massachusetts. Lastly, on RocketChat the admin of a pro-ISIS chat room warned users that group's conversations in Telegram were not encrypted.

On May 14, a Conklin, New York, man allegedly murdered 10 people and injured three others in an attack targeting African Americans at a Buffalo, New York grocery store. The accused gunman, who was arrested at the scene, livestreamed part of his attack on the website Twitch and allegedly released a manifesto that quickly spread online. The document, approximately two-thirds of which was plagiarized from the Christchurch terrorist’s manifesto, identified the author as a white supremacist and antisemite who believes in the great replacement theory. The author also stated that 4chan and white supremacist websites deeply inspired him but that the Christchurch terrorist’s livestreamed attack in March 2019 served as his inspiration and encouraged him to seek out additional white supremacist content.

The document used accelerationist rhetoric and was written to encourage additional attacks and urged future violence. The manifesto also contained tactical information, including information and analysis of the weapons and protective equipment used to assist future attackers. The manifesto also contained several memes, cartoons, and other racist and antisemitic content that frequently appear on 4chan, Telegram, and other online refuges of the far and extreme right. Similar to other manifestos written by white supremacist murderers, parts of the document may seek to mislead or troll readers.

White supremacists posted the manifesto on Telegram and Catbox.Moe, which has previously refused to remove content associated with white supremacist terrorist attacks. Versions of the manifesto posted on DocDroid and the Internet Archive were removed by those platforms.

Twitch cut off the video livestream less than two minutes after the gunman began his attack, almost seven minutes total into the livestream. Before the beginning of the attack, firearms are visible multiple times in the video. The gunman shot at least eight people before Twitch cut off the livestream. The video was spread by white supremacist chats and channels on Telegram, and links and clips were posted on Facebook. Some video content was on Facebook for nine hours. The video was also posted on Vimeo, BitChute, AnonFiles, and Streamable, but not before receiving over three million views on the latter video streaming site. CEP reported links to the video and video clips on Twitter, video clips were still accessible five and a half hours later.

Dozens of white supremacist Telegram channels celebrated the Buffalo attack and glorified the attacker. Channel admins posted the manifesto and video and encouraged other acts of violence. Multiple channels posted content endorsing the great replacement theory, including several channels that stated that they did not support the attack but still wanted to promote the conspiracy theory.

In a video posted on the Odysee video streaming platform, the Australian neo-Nazi Thomas Sewell stated that violence was currently an improper tactic but that attacks should be viewed as “omens” as part of a system accelerating towards collapse and eventual white supremacist rule.

4chan users posted multiple links to the attack video and manifesto and encouraged its further spread. Multiple other users posted comments glorifying the attacker, complaining that the large number of users slowed their video downloads and mocked victims using racist language. Some 4chan users alleged that the U.S. government committed the attack.

A media group on Telegram supportive of the Proud Boys with over 16,000 followers posted the Buffalo attacker’s manifesto. Comments affiliated with the post included racist and antisemitic content. Proud Boys Telegram channels affiliated with chapters in Missouri, Texas, and the Pacific Northwest sought to downplay the Buffalo attack, posted white supremacist and antisemitic messages, claimed that violence committed by non-whites was worse, and suggested that the attack was a false flag.

CEP located a neo-Nazi periodical sold by Amazon and Barnes & Noble. The most recent issue of the magazine, released on April 20, 2022, contains positive articles about the Nordic Resistance Movement, including a contribution by Simon Lindberg, head of the group’s Swedish branch and one of its leading propagandists. The magazine’s editors describe themselves as white nationalists who wish to support “activists.”

Neither Amazon nor Barnes & Noble removed the magazine six days after CEP reported it.

On May 11, CEP researchers located a guide for making homemade explosives on the bulletin board style website JustPaste.It. The manual was created by the pro-ISIS group al-Saqri Foundation, which has published manuals over several years on the manufacture and use of explosives, poisons, and other weaponry. The guide was uploaded to the site on May 11 but was removed after CEP reported it to JustPaste.It. 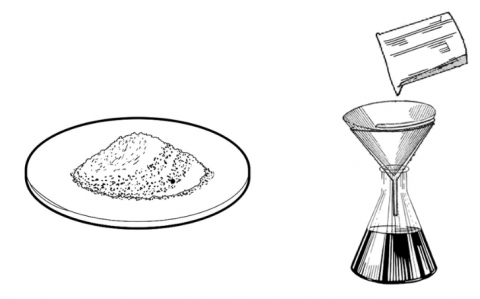 Image from pro-ISIS explosives manual located on JustPaste.It, May 11.

CEP researchers located a post in a neo-Nazi Telegram chat that consisted of instructions for making a homemade explosive. The post advised that all items should be purchased “with cash and while wearing a face mask.” The same message also offered tips on synthesis and transport. The same user also posted advice regarding committing arson and the homemade manufacture of firearm suppressors.

On May 9, a Telegram channel affiliated with the neo-Nazi Nationalist Social Club (NSC) posted the work email addresses and phone numbers of employees of a public school in Massachusetts. The channel encouraged the group’s members and supporters to make complaints against a kindergarten teacher that the channel accused of being “anti-white.” NSC members have previously protested against critical race theory in New Hampshire and have made minor attempts to appeal to individuals with more mainstream political views.

On May 10, the admin of a pro-ISIS RocketChat room dedicated to information security warned other users that group conversations in Telegram are not encrypted and that users should use a VPN. The admin stated that it was essential to use a VPN when using Telegram with a phone number given by another individual. The account also warned that Telegram saves information about its users, such as device type and location.