In addition, CEP located two new ISIS propaganda videos depicting fighting and combat training that were located on several websites, including Telegram, Streamable, and the Internet Archive. A pro-ISIS blog with sponsored advertisements was found on WordPress, and the pro-ISIS Voice of Khorasan online magazine released its 20th issue. Instructions for making explosives, posted by the pro-ISIS al-Saqri foundation, were also found on JustPaste.It.

CEP researchers also discovered a fundraiser launched on the crowdfunding site GiveSendGo by Christopher Hood, leader of the Nationalist Social Club (NSC). The former leader of the neo-Nazi accelerationist group The Base, Rinaldo Nazzaro, posted on Telegram that he could connect “like-minded individuals” to train together in several states. Another neo-Nazi accelerationist group claimed on Telegram and their website to have vandalized a Michigan office of the Republican Party with swastikas, and a UK-based white supremacist musician requested financial donations on Telegram.

CEP located a YouTube account for a regional white supremacist active club chapter. The account, created in December 2021, posted two videos on December 27, 2022, consisting of white supremacist music, which had over 150 views three weeks later. CEP also located a YouTube page for a European active club chapter in December, which the Google-owned platform did not remove after it was reported. The more recently found active club account was also not removed after CEP reported it for violating the site’s community guidelines.

CEP also found an Instagram account on January 19 for a French active club chapter. The first post, on January 17, consisted of a 30-second propaganda video advertising the group, which had almost 1,500 views two days later. Both the video and a post on January 18 contained white supremacist symbols. CEP reported the account to Instagram, but it was still online on January 23. 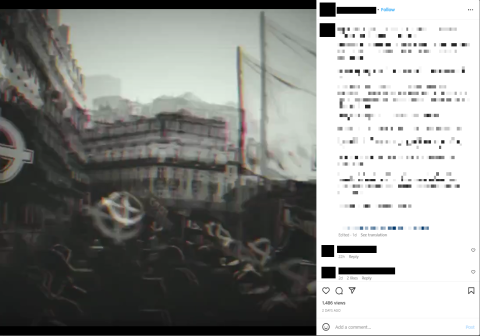 In a post on January 16, a regional chapter of a white supremacist active club recommended that their followers and potential members use ProtonMail because of its encryption and no-cost service. The active club chapter has made Telegram posts in support of the violent white supremacist group The Order and has proclaimed that their state should only exist for white people. Other active club chapters have also used ProtonMail accounts.

Rob Rundo, the co-founder of the Rise Above Movement and founder of the active club movement, was interviewed on a podcast livestreamed on YouTube on January 5. In the interview, Rundo advocated for creating white supremacist gangs and building a “warrior class.” In a podcast section labeled “fighting nonwhites,” Rundo stated, “we are surrounded by savages,” and said that individuals needed to be trained in combat sports.

The livestream was available on YouTube two weeks later and had over 1,500 views. Users of the livestream chat and comments section promoted white supremacist groups and ideology and used racial slurs. The podcast host posted a link to a recently released propaganda video made by an active club-affiliated media group. The podcast's YouTube account was created in July 2021 and has over 600 subscribers. At least one prior YouTube account for the podcast was removed from the platform.

CEP reported the livestream to YouTube on January 19, but it was still online on January 23.

CEP also found four posts sharing the video on Facebook, several of which contained links to Telegram contacts and links to the video on Streamable. Facebook removed all four links after CEP reported them. Two additional links, allegedly for the video directly on Facebook, were removed by the time CEP researchers located them approximately 22 hours after they were posted.

ISIS also released a video on January 20 from the group’s self-proclaimed Somalia province. The video encourages terrorist attacks and shows combat against Somali security forces, over a half dozen assassinations of individuals identified as Somali police officers, and roadside bombings of vehicles and personnel identified as belonging to the Somali police and armed forces, as well as African Union forces. The video also shows ISIS fighters training in assassination tactics and training with explosives and small arms. The video also includes an interview with a fighter who states that he left Kenya to fight alongside ISIS in Somalia. Following his capture and interrogation, he escaped back to ISIS-held territory.

GoFile.Io, FromSmash, Mail.Ru, MediaFire, and the Internet Archive removed the video after CEP reported it. 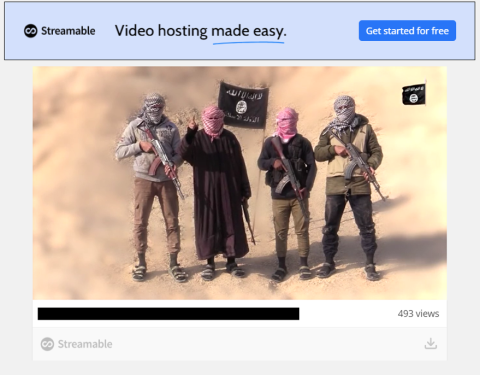 ISIS Sinai Province video on Streamable with almost 500 views on January 19, approximately 24 hours after it was posted. Streamable removed the video after CEP reported it.

CEP researchers located an ISIS propaganda blog on the WordPress platform. The blog, which was written in Indonesian, included al-Naba weekly newsletters, Amaq propaganda photos, ISIS propaganda statements, pro-ISIS videos, and links to ISIS propaganda on other platforms. The first post was made on December 27, 2022. The blog contained links to sponsored advertising content. CEP reported the blog to WordPress on January 18, who removed it five days later.

The 20th issue of the pro-ISIS Voice of Khorasan web magazine was released on January 15 by the al-Azaim Media Foundation. The web magazine encouraged joining ISIS. An article accused the Taliban of making deals with China to export valuable minerals, stating that the Taliban do not care about China’s persecution of the Uyghurs. Other articles included news items regarding recent ISIS attacks in Afghanistan, Iraq, Syria, and the Sahara region. The final article stated that violence against Israel would increase in response to the new government’s policies.

CEP researchers located instructions on JustPaste.It for making explosives using fertilizer, posted by the pro-ISIS al-Saqri Foundation. The Al-Saqri Foundation publishes manuals on the manufacture and use of explosives, poisons, and other weaponry. Originally posted on December 28, the page had over 330 views when it was reported on January 18. JustPaste.It removed the page after CEP reported it. 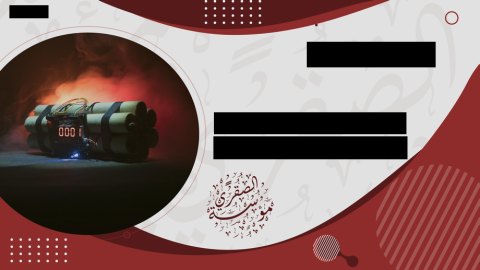 Christopher Hood, the leader of the Nationalist Social Club (NSC), launched a fundraiser on the crowdfunding site GiveSendGo, and the neo-Nazi group requested cryptocurrency donations on Telegram after Hood and another individual were charged on January 17 with violating New Hampshire’s Civil Rights Act. Hood and Leo Anthony Cullinan face financial penalties for hanging white supremacist banners over a highway in July.

The GiveSendGo fundraiser, allegedly for legal fees, had raised over $3,000 within 24 hours. Several comments on the fundraiser used white supremacist slogans and alluded to violence. GiveSendGo forbids using their fundraising platform for “items that promote hate, violence, (or) racial intolerance.” CEP reported the fundraiser to GiveSendGo on January 19, but it was still active on January 23. A campaign on GiveSendGo in September for an avowed neo-Nazi seeking to build a campground to “train” was also not removed.

NSC also requested crypto donations in either Monero or Bitcoin on Telegram on January 17. The listed Bitcoin address received approximately $350 within 24 hours. It is unknown whether or not the group received Monero donations. The call for crypto donations was shared by at least 12 Telegram channels, including two belonging to regional active clubs. 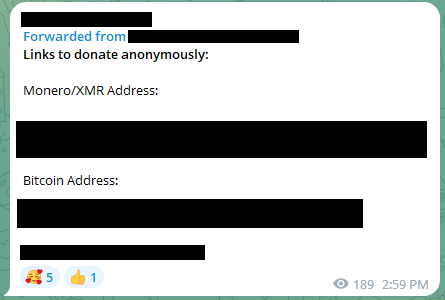 On January 18, the former leader of neo-Nazi accelerationist group The Base, Rinaldo Nazzaro, posted on Telegram that he could connect individuals hoping to find “like-minded individuals” to train together in Texas, New Mexico, Arizona, Nevada, or Southern California. It is unclear if Nazzaro’s attempt to connect individuals is related to The Base, a different group, or outside of an organizational structure.

In November 2020, Nazzaro launched “Project Omega” to connect individuals and build cell networks in the U.S. to allegedly train and prepare for societal and governmental collapse. “Project Omega” stated that its primary purpose was to serve as a “matchmaker” to connect people in their general area. It is unclear when Telegram removed channels associated with “Project Omega,” evidence suggests January 2021. The group is presumed defunct.

In February 2022, Nazzaro, who lives in St. Petersburg, Russia, claimed that he had given up control of The Base. Nazzaro has continued to promote the group and its imprisoned members on Telegram, however, in August 2022, he stated that he is no longer a member and does not represent them.

On January 18, a neo-Nazi accelerationist group claimed on Telegram and via their website to have vandalized a local Michigan GOP office with swastikas and graffiti demanding freedom for a man known as Manic, recently arrested as part of an alleged neo-Nazi bank robbery plot. The group stated that similar events would occur and “gradually get worse.” A message shared on the group’s Telegram channel noted that the vandalism was made on behalf of Manic and to show that it is easy to commit “sabotage.”

Propaganda on the group’s website is heavily inspired by the Atomwaffen Division and advocates for violence.

On January 11, a UK-based white supremacist musician announced on Telegram that they had been charged with incitement to racial hatred under Public Order Act 1986 and were awaiting trial. The individual posted a link to a YouTube channel featuring a white supremacist music video glorifying the active club movement and a link to a PayPal account that used the number “1488” in the name, a numeric code referencing the white supremacist 14 words slogan, and “Heil Hitler” (H is the eighth letter of the alphabet). CEP forwarded the information to relevant authorities.

On January 12, CEP researchers located five accounts on Twitter that glorified the Christchurch terrorist attack. Two accounts posted a total of three videos that consisted of two 19-second clips and a 38-second clip that contained footage taken directly from the video livestreamed by the attacker in March 2019. The videos were posted on December 29, 2022, January 12, 2023, and January 2, 2023. The 19-second clips had 826 views and 1,333 views, respectively. The other three accounts included two that used a photo taken from the attack video as a profile photo and posted memes glorifying the attacker. CEP reported the accounts to relevant national authorities.