(New York, N.Y.) — The Counter Extremism Project (CEP) reports weekly on the methods used by extremists to exploit the Internet and social media platforms to recruit followers and incite violence. Last week, following the U.S. announcement that ISIS leader Amir Muhammad Sa’id Abdal-Rahman al-Mawla, a.k.a. Abu Ibrahim al-Hashimi al-Quraishi had died in a U.S raid, official ISIS media outlets did not make any immediate comments on the death. However, the group’s online supporters presented different conspiracy theories trying to dispute the U.S. narrative of al-Quraishi’s death. A new Afghanistan centric pro-ISIS web magazine titled “Voice of Khurasan” was released online from the al-Azaim Foundation. A couple of days later the 24th issue of “Voice of Hind” was released and uploaded on multiple websites.

In addition, CEP researchers found a website belonging to the Rise Above Movement (RAM) affiliated “active club” movement. Neo-Nazi group The Base posted a propaganda video on Telegram that was produced with the recently formed splinter Atomwaffen Division (AWD). White supremacists on the dark web celebrated the murder of two German police officers, and on BayFiles white supremacist terrorist manifestos and bomb making guides were located. Finally, at least seven white supremacist Telegram channels celebrated bomb threats that were called in to historically black colleges and universities.

No Official ISIS Response to Killing of Leader Al-Quraishi

ISIS online supporters presented various conspiracy theories regarding the identity of the individual whose house was raided on February 3, including that the occupant was a high ranking member of Hayat Tahrir al-Sham (HTS), that HTS was secretly working with the U.S., or that ISIS’s leader was not killed. Other ISIS online supporters warned web forum members that they should not share information not confirmed by ISIS official media offices and that gossip was detrimental to the group’s online support infrastructure. Additional posts affirmed that the death of al-Quraishi would not impact the group as a whole, that martyrdom was desirable, and that steadfastness and faith were essential.

On January 31, a new pro-ISIS web magazine, titled “Voice of Khurasan,” was released online from al-Azaim Foundation. The magazine is analogous to the pro-ISIS publication “Voice of Hind” in that both are written in English and have similar layouts and imagery.

The inaugural “Voice of Khurasan” issue contained seven articles, four dealing with broader ISIS matters, and three directly concerning Afghanistan. The four global articles called for a new generation to join ISIS, celebrated the Ghweran prison attack in Hasakah, Syria, encouraged the practice of ISIS’s specific brand of fundamentalism, and encouraged their readers to give the group money, especially women who are described as not being able to participate in armed combat.

The web magazine included an article condemning the Taliban, who were described as hypocrites for claiming to be an Islamic emirate but having diplomatic relations with Pakistan, the U.S., China, and other states. The article also accused the Taliban of protecting opium fields and traffickers, defending the majority Shiite Hazara community, and entering a secret pact with the U.S. to destroy ISIS-K. The second article regarding Afghanistan contained a propaganda biography of the ISIS terrorist who killed almost 200 people, including 13 U.S. service mebers, in the suicide attack outside the Kabul airport on August 26.

The bomber was described as the well-educated son of a wealthy family who gave up a life of comfort to join ISIS-K. The final article concerning Afghanistan stated that ISIS’s self-proclaimed Khurasan province is the third most important geographic unit, following Iraq and Syria, and that ISIS’s pure enforcement of religious law is a threat to the Taliban and all other regional powers and the U.S. The article described ISIS as not discriminating based on tribe, nationality, or ethnicity, contrary to the Taliban, and encouraged the reader to join the group before it was too late.

One member of a pro-ISIS chat stated that the release of the web magazine in English was “extra special” because pro-ISIS propagandists remembered their broad global audience. 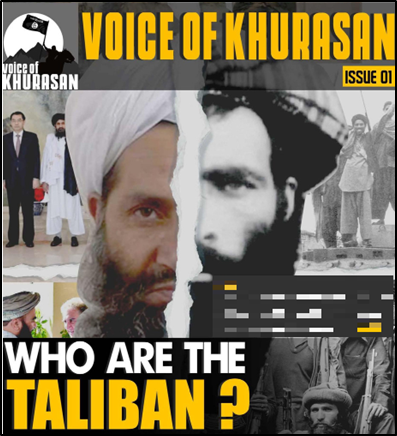 The cover of “Voice of Khurasan”

CEP located multiple uploads of the 24th issue of the pro-ISIS web magazine “Voice of Hind,” released on February 4. The issue contained an article celebrating the attack on the Ghweran prison in Hasakah, Syria, expressing the desire that soon other prisons holding ISIS prisoners would similarly be assaulted. A different article stated that the Ghweran attack showed that ISIS fights to free prisoners and refuses to surrender. The magazine also contained an article that stated that Indian Hindus planned to kill Muslims and that sectarian behavior, whether through political parties or mob violence, would only strengthen ISIS. The article encouraged acts of terrorism in India. A separate essay condemned nationalism, atheism, democracy, secularism, and ethnocentrism.

The web magazine was spread on Hoop, Element, and a pro-ISIS propaganda website. The publication was additionally uploaded to at least seven websites. Within approximately 24 hours, the web magazine was only available on two websites, the Internet Archive, and the Tlgur Telegram bot. Tlgur removed the magazine after CEP reported it, and the Internet Archive made it only available to logged in users.

CEP researchers located a website belonging to the Rise Above Movement (RAM) linked “active club” movement. The website contains essays on the group’s decentralized structure, white supremacist organizing, propaganda videos and photos, and contact information. According to ICANN, the website was created in September 2021, however, site activity increased in late January 2022. The website uses Cloudflare as its name server and Registrar.Eu as its registrar.

On February 1, an active club affiliated Telegram channel requested that the group’s supporters send photos to be featured in their promotional material. RAM’s cofounder and leader Robert Rundo, who authored several essays on the website, is allegedly hiding out in Serbia.

On January 29, a Telegram channel affiliated with the neo-Nazi group The Base released a propaganda video jointly with the splinter Atomwaffen Division (AWD). The video shows five individuals firing rifles in a snowy wooded area in what the video describes as a joint training event between the two groups in 2022. The video concludes with recruiting contact information for both groups.

On November 8, 2021, a breakaway AWD was announced, claiming no affiliated with the National Socialist Order, AWD’s successor organization. James Mason condemned the splinter AWD group on November 12, stating that it was the work of a single individual. While the size of the splinter AWD group is unknown, available evidence suggests that it is extremely small, and the group has been quiet since announcing their formation in November.

On January 31, a user of a white supremacist imageboard on the dark web celebrated the murder of two German police officers in Rhineland-Palatinate. The forum member used an image frequently associated with accelerationist neo-Nazi Telegram channels and used antisemitic language to describe the slain police officers. German authorities arrested two men in connection with the killing.

On February 1, CEP reported content to BayFiles, including white supremacist terrorist manifestos and information for the homemade construction of explosives, explosive devices, firearms suppressors, and firearms components. BayFiles removed the content after it was reported. The files were uploaded by a user of a dark web white supremacist forum.