(New York, N.Y.) – The Counter Extremism Project (CEP) reports weekly on the methods used by extremists to exploit the Internet and social media platforms to recruit followers and incite violence. Last week, a pro-ISIS supporter recirculated a previously released propaganda video calling for terrorist attacks through vehicles, knives, and arson, and published it on multiple online platforms including JustPaste.It, Microsoft One Drive, and the Internet Archive. Additionally, the seventh issue of the pro-ISIS web magazine “Voice of Hind” was released on numerous websites.

Additionally, a white supremacist extreme right-wing prisoner support group requested that individuals send material to incarcerated individuals with the aim to radicalize prisoners. Finally, white supremacists on Telegram and 8chan successor imageboards celebrated Christchurch terrorist, Brenton Tarrant, leading up to and on the day of his sentencing.

On August 27, an ISIS supporter recirculated a previously released propaganda video via JustPaste.It, the Microsoft One Drive, the Internet Archive, and a Telegram bot. Approximately 10 hours after it was uploaded, the video was still available on the Microsoft One Drive and the Telegram bot, with links still available on JustPaste.It. The video, titled “Incite the Believers,” was originally released on July 26, 2020. The video advises the viewer to commit attacks using available means such as vehicles, knives, or fire to commit arson. The video specifically encouraged committing arson, including wildfires and setting fire to agriculture due to the economic damage caused by mass fires and the ease in committing the attack.

“In the month since the ISIS propaganda video first appeared online, it would be reasonable to expect that online platforms have had enough time to figure out how to remove and prevent the reupload of these kinds of dangerous videos,” said CEP researcher Joshua Fisher-Birch. “Unfortunately, this is not the case. The continued availability of extremist content that encourages followers to commit acts of terror represents a danger to our society. It is imperative that online platforms establish more effective standards for moderating violent terrorist content and cease to provide services to supporters of terrorist groups.” 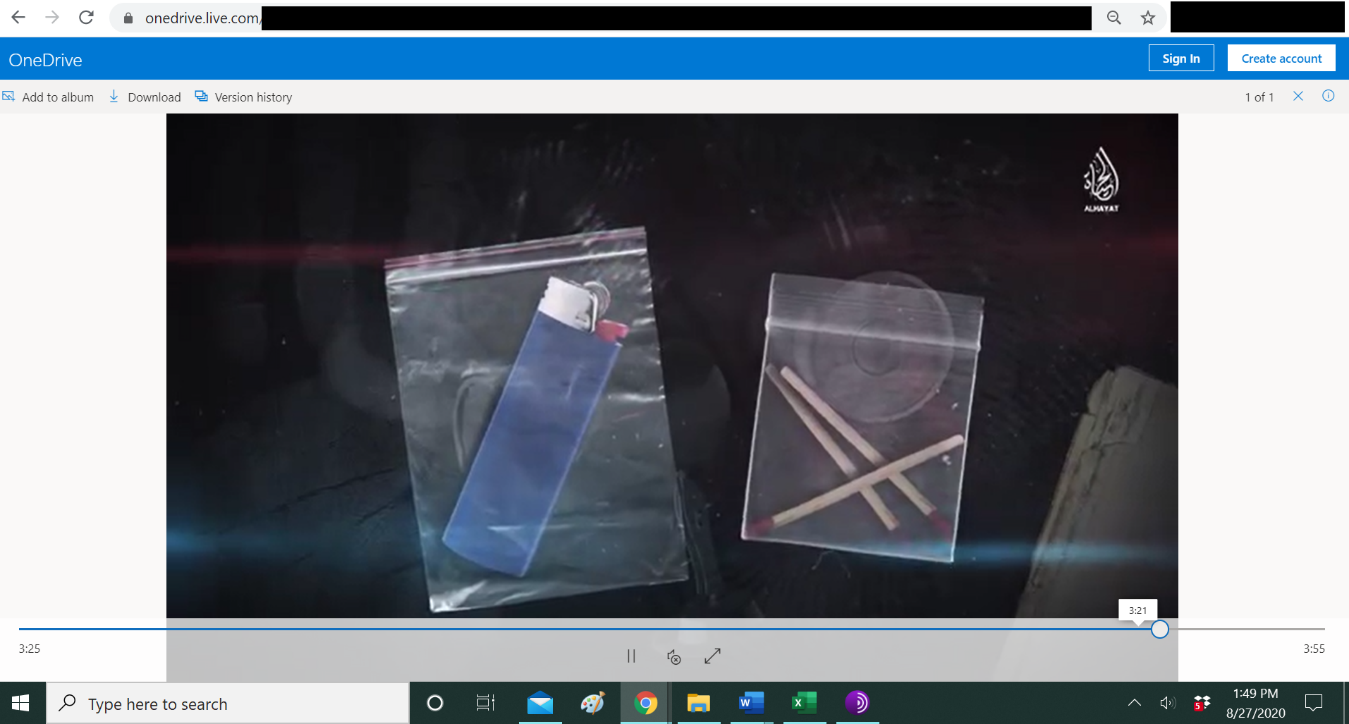 ISIS video “Incite the Believers” located on the Microsoft One Drive, August 27.

The seventh issue of the pro-ISIS web magazine “Voice of Hind” was released on numerous websites on August 22. The magazine is meant to appeal to Muslims in the Indian subcontinent and beyond. The seventh issue contained an article urging Muslims in India to take over the former site of the Babri Masjid, adding that the destruction of the mosque is proof that Muslims are not considered full citizens in India. Another section, allegedly written by ISIS supporters in the Maldives, offered advice to prevent ISIS supporters from arguing with one another on social media or sharing information that is meant to have a limited audience. An article directed towards the group’s supporters in Bangladesh and India encouraged additional attacks in both countries.

White supremacists and members of the extreme right-wing praised Kenosha, Wisconsin shoother Kyle Rittenhouse on Telegram and 8chan successor imageboards. Rittenhouse has been charged by authorities with two counts of first-degree intentional homicide, two counts of first-degree recklessly endangering safety, and one count of possession of a dangerous weapon by a person under 18. At least three Telegram accounts affiliated with the neo-fascist street fighting group the Proud Boys praised the shooter and posted memes glorifying his actions. A Telegram account affiliated with the white supremacist Rise Above Movement (RAM) praised Rittenhouse for killing and wounding leftists. Other accounts approvingly posted footage from the shooting and urged similar acts of violence. Throughout the summer, white supremacist Telegram channels have urged their audience to commit acts of violence, including murder at protests around the country. Users of 8chan successor boards also praised Rittenhouse and posted videos of the shooting.

On Facebook, a group identifying itself as the Kenosha Guard called for armed individuals to travel to the city to oppose protestors and defend property. The group created a Facebook event for the evening of August 25. Both the event and the group’s Facebook page were removed following the murder of two people and wounding of one by a vigilante on the night of August 25 during unrest in the city. The Facebook event was cross posted to 4chan’s /pol board.

On August 24, a white supremacist Telegram channel encouraged violence against law enforcement officers. The channel claimed that violence is justified due to “anti-white” laws. Photos of wounded police officers accompanied the post. The channel has over 3,000 subscribers and features content from several propagandists. The message was viewed over 1,400 times three days later and reposted by at least four additional accounts.

Between August 22 and August 28, CEP researchers located numerous pieces of extremist content on Soundcloud, including a narrated version of the Christchurch terrorist’s manifesto, music glorifying the neo-Nazi terror group Combat 18, and lectures by Anwar al-Awlaki. At least one al-Awlaki lecture on the platform directly endorsed violence. Soundcloud’s Terms of Use forbid content that “promotes or incites violence, terrorism, illegal acts, or hatred on the grounds of race, ethnicity, cultural identity, religious belief, disability, gender, identity or sexual orientation.”

On August 25, a white supremacist extreme right-wing prisoner support group requested that individuals send articles to incarcerated individuals to help them radicalize other inmates. The group, founded in December 2019, seeks to provide money, books, and letters to numerous white supremacists in prison, including mass shooters such as Dylann Roof, Robert Bowers, and Patrick Crusius, and alleged members of groups such as the Atomwaffen Division and The Base. The organization publishes letters sent by white supremacist inmates and maintains a Telegram channel, Gab account, and a website that uses Cloudflare as its name server.

White Supremacists Celebrate Christchurch Terrorist Leading Up To, And On Day Of Sentencing

White supremacists on Telegram and 8chan successor imageboards celebrated the Christchurch terrorist, Brenton Tarrant, in the lead up to, and on the day of his sentencing. Tarrant was sentenced to life in prison without the possibility of parole for the crimes of terrorism, murdering 51 people, and the attempted murder of 40 people. On Telegram, white supremacists posted the attacker's video, audiobooks of the attacker’s manifesto, and propaganda glorifying the attacker and urging additional violence. Users of several 8chan successor imageboards, including the main 8chan successor board linked to 8chan’s owner, posted video from the attack and praised the attacker.

On August 5, 2019, a policeman in Kandahar opened fire on his colleagues, killing seven officers before he fled the scene. Taliban spokesperson Qari Yusouf Ahmadi claimed the attacker was a member of the Taliban

Another great interview on GLOBAL with @NATSEC09. @FightExtremism's Dr. Hans-Jakob Schindler gives his take on the… https://t.co/QWTJRmdBbq

"“Since its founding in 1988, al-Qaeda has only known two leaders, Osama bin Laden and Ayman al-Zawahiri. Their dea… https://t.co/XSSa3OpfPh