Between May 30 and June 5, white supremacist and neo-Nazi Telegram channels continued to exploit the ongoing U.S. protests and civil disorder by encouraging violence and spreading extremist propaganda. One prominent neo-Nazi accelerationist channel with over 5,500 members called upon subscribers to “make things worse” for the average citizen, police, and the U.S. government, and advocated for attacks on infrastructure including the power grid. A similar channel claiming to be from Bulgaria urged their 1,000 subscribers on June 3 to avoid protests, and instead to kill politicians. Other channels posted information from Black Lives Matter Telegram channels, including coordinating chats and announcement channels, for the purposes of harassment. A meme video channel with over 3,800 subscribers posted a video composed of recent violent footage and photos of armed white men, advocating for violence against protesters, and praising Dylann Roof.

A channel affiliated with a New England based neo-Nazi gang posted the results of their flyer efforts near a protest in Worcester, Massachusetts, where they urged white people to join their group in order to find “protection” from Black Lives Matter and Antifa. Revolt Through Tradition, an extreme right group with a focus on martial arts, posted photos of their stickers in the vicinity of protests in Boston, Indianapolis, and Atlanta.

On May 31, a Telegram channel was created by an alleged Russian affiliate of the neo-Nazi group Atomwaffen Division (AWD). The channel features a unique recruitment email address and has published Russian-translated AWD propaganda and photos calling for violence. The Telegram channel was advertised on another channel claiming to belong to AWD in Germany.

Two links were posted in the channel, one for a VK page and the other for a website containing manifestos and e-books. The VK page contains links and an exhortation to read James Mason’s book Siege. The website in the second link contains manifestos from Brenton Tarrant in 17 languages, Anders Breivik, and links to Siege and The Turner Diaries. The website also contains a manifesto by an unknown author who advocates for white supremacist accelerationist violence. A similar manifesto was posted on an 8chan successor website in February 2020. The website’s registrar is GoDaddy, and the name server is Domain Control.

AWD in the U.S. claimed to have disbanded in March 2020. It is unclear what relationship if any groups claiming to be AWD outside of North America have with the U.S. group or its members. In December 2019, a group in Ukraine claimed to be a chapter of AWD, however they were disavowed and condemned by the American organization.

On June 4, CEP researchers located a Dhivehi Maldivian pro-ISIS propaganda group on Facebook. The content consists of statements and short videos. The page was created in January 2020, and had over 480 likes on June 4, and posts approximately once per week. The group uses the same name as a pro-ISIS propaganda group on RocketChat and other platforms that has previously called for terrorist attacks in Europe, the U.S., and Russia.

On June 4, pro-ISIS Telegram channels urged subscribers to switch to the Hoop Messenger application. Pro-ISIS Nasher News stated that for the time being, Hoop would be their primary form of communication. Hoop is one of the communications platforms that pro-ISIS propagandists switched to following the November 2019 Telegram crackdown on ISIS content.

Hoop Messenger is owned by the Vancouver, Canada company Magnificus Software Inc. and currently hosts dozens of pro-ISIS channels, including those that post news, video propaganda links, and information security. 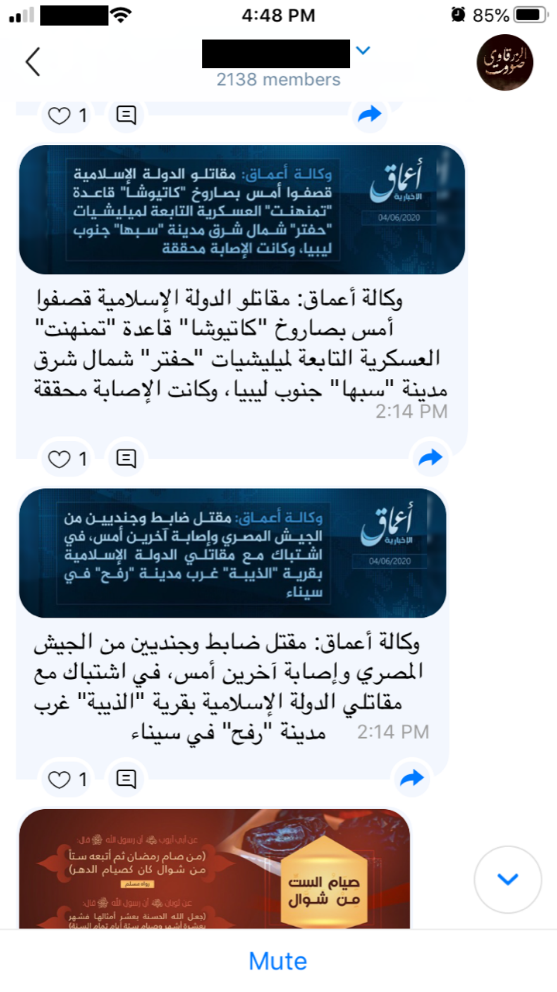