While ISIS systematically persecutes and murders religious minorities in the territory it controls, both ISIS and al-Qaeda have specifically targeted Christians and Jews in Western countries. In 2009, al-Qaeda’s then-second-in-command Ayman al-Zawahiri urged Muslims to “strike the interests of the enemies of Islam—namely, the Christians and the Jews—wherever and by whatever means you can.” In its first issue of Inspire, released in the summer of 2010, al-Qaeda wrote that “The Jews and Christians have dishonored the Muslims, desecrated our holy places, and cursed the beloved Prophet.” More recently, in the spring of 2016, al-Qaeda urged lone wolf attacks against Jews in particular, writing, “How many Jews are there in America, Europe and other kufr [nonbelieving] countries! So take matters in [to your own] hand[s]….” (Sources: ADL, Inspire, p. 33, Inspire, p. 37)

The spring 2016 call to violence followed multiple attempted or successful attacks against Jewish targets by al-Qaeda operatives. Since the early 2000s, al-Qaeda has carried out high-profile attacks on Jewish institutions throughout the Middle East, including the April 2002 attack on the El Ghriba Synagogue in Djerba, Tunisia, as well as the suicide car bombings of two synagogues in Istanbul, Turkey, in November 2003. In 2005, al-Qaeda operative Andrew Rowe—a convert to Islam from west London—was sentenced to 15 years in prison after he was found to possess instructions on firing mortars, as well as audio cassettes of sermons requiring followers to wage jihad against the “unjust Christians and aggressive Jews.” (Sources: BBC News, BBC News, JCPA, BBC News) 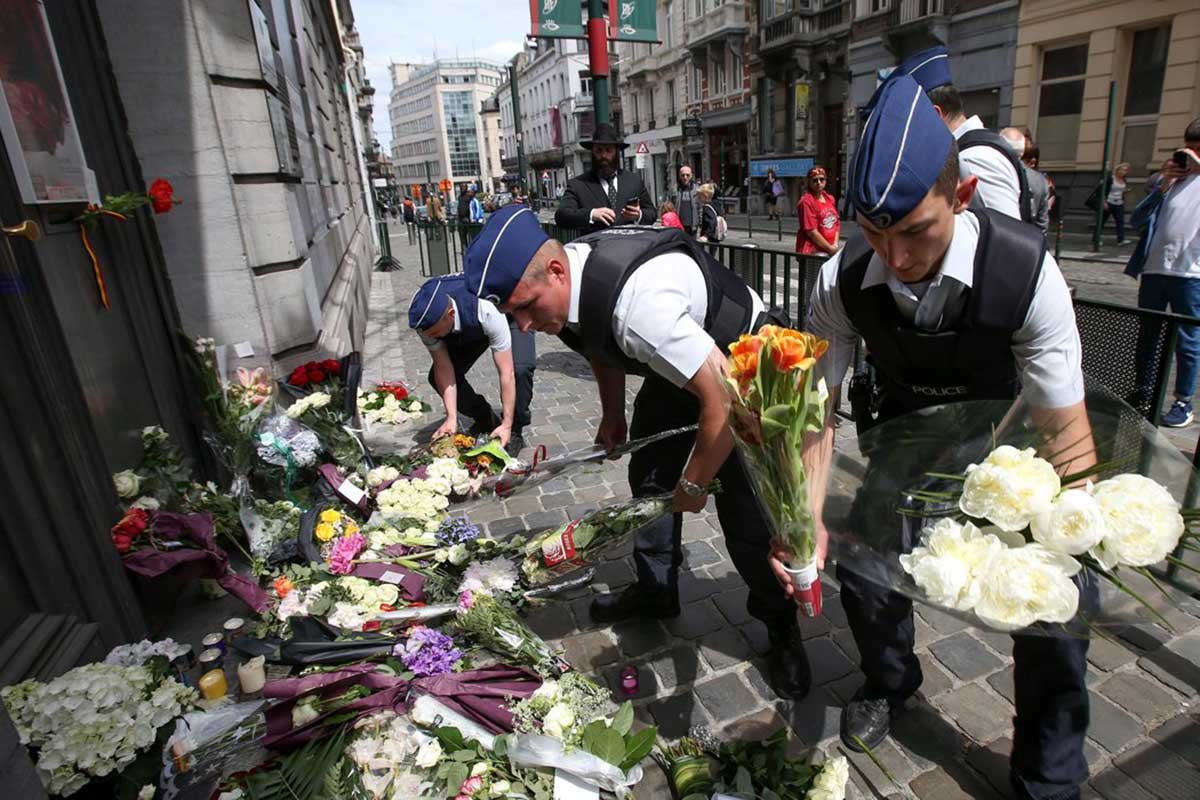 Belgian police officers place flowers in front of the Jewish Museum of Belgium after the shooting carried out by ISIS fighter Mehdi Nemmouche
(Source: EPA)

ISIS attacks on Jewish targets continued throughout 2015 and into 2016. In October 2015, an American ISIS supporter told an undercover FBI agent that he wanted to attack the Jewish Community Center in Tucson, Arizona. ISIS-linked operatives stabbed Jewish school teachers in Marseilles in two separate incidents in November 2015 and January 2016, respectively. (Sources: BBC News, Guardian, Times of Israel)

ISIS operatives have also carried out attacks targeting churches. In April 2015, French authorities arrested Algerian national Sid Ahmed Ghlam for allegedly planning to attack a church in Villejuif, south of Paris. One of Ghlam’s contacts in Syria had reportedly urged him to attack churches in France. In July 2016, two self-proclaimed “soldiers of ISIS” stormed a church in northern France, took nuns as hostages, and slit the throat of the 85-year-old priest. (Sources: Guardian, BBC News, Washington Post)

ISIS’s propaganda regularly features anti-Semitic and anti-Christian content. A video released in June 2014 by ISIS’s Al-Hayat media department featured a nasheed (Islamic chant) with the lyric, “Wherever our war goes, Jewish rabbis are humiliated… Break the crosses [of Christians] and destroy the lineage of the grandsons of monkeys [Jews].” In its second issue of Inspire, al-Qaeda explained the Islamic concept of jizyah, a tax historically imposed on some groups of non-Muslims, including Christians and Jews, by some Islamic rulers. Al-Qaeda wrote, “…Jews and the Christians…were allowed to retain their religious practices as long as they paid the jizyah in a state of humility.” However, the Jews and Christians “were made to know that their religious practices were false, that Islam does not approve of either Judaism or Christianity, and that they are considered to be misguided and are destined to Hellfire.” (Sources: MEMRI, Inspire, p. 38)