Islamic extremists have for years targeted cartoonists who have drawn the Islamic prophet Muhammad, an act which some consider blasphemous and contrary to the tenets of Islam. Violence against such cartoonists can be traced back to September 2005, when the Danish newspaper Jyllands-Posten published a series of cartoons depicting the Islamic prophet. The Norwegian newspaper Magazinet republished the cartoons shortly thereafter. Protests spread across the Middle East within months, and Danish and Norwegian embassies were attacked in February 2006. Soon after, French satire magazine Charlie Hebdo republished the cartoons. (Sources: TIME, Telegraph)

In the subsequent years, jihadists have issued threats and carried out attacks against such cartoonists. In early 2008, a Somali man with Danish residence attacked the house of Danish cartoonist Kurt Westergaard—the illustrator of the original Muhammad cartoons published in Jyllands-Posten—in an attempt to take his life. In March 2008, Osama bin Laden threatened the European Union over printing the cartoons. In an audio recording, bin Laden warned, “Your publications of these drawings—part of a new crusade in which the Pope of the Vatican had a significant role—is a confirmation from you that the war continues.” In 2009, American citizen Colleen LaRose—calling herself “Jihad Jane”—pled guilty to traveling to Europe in an attempt to participate in an al-Qaeda plot to murder Swedish cartoonist Lars Vilks, who had drawn cartoons of Muhammad. In early 2010, Virginia- and New York-based extremists Zachary Chesser and Jesse Morton made online death threats to the creators of South Park, a cartoon series that, in one episode, depicted Muhammad in a bear costume. To justify the killing of the South Park writers, Chesser and Morton posted to their website videos of multiple lectures by Anwar al-Awlaki in which the cleric argued that those who insult Muhammad are deserving of death. Both men later pled guilty to terrorism-related charges, including communicating threats. (Sources: PET, Guardian, Al Arabiya, Reuters, FBI, FBI, CBS News)

In the summer of 2010, following years of plots against cartoonists, al-Qaeda stoked the flames by urging lone wolves to “target the Americans” for the “heinous crimes [of] the cartoons of the Messenger.” In its first issue of Inspire, Al-Qaeda further inferred that killing a cartoonist who had drawn the prophet Muhammad would be a “greater cause than fighting for Palestine, Afghanistan or Iraq.” (Source: Inspire, pp. 17, 28)

ISIS has also targeted cartoonists who have drawn Muhammad. In May 2015, the group claimed responsibility for its first attack on American soil after two American gunmen—Nadir Soofi and Elton Simpson—targeted an event hosted by the American Freedom Defense Initiative in Garland, Texas. The event showcased cartoons of Muhammad and offered a top prize of $10,000. A security guard killed both perpetrators before they were able to attack the event. In its claim of responsibility, ISIS wrote that “Two of the soldiers of the caliphate executed an attack on an art exhibit in Garland, Texas, and this exhibit was portraying negative pictures of the Prophet Mohammad.” (Sources: TIME, Telegraph, International Business Times)

In January 2015, AQAP operatives armed with automatic rifles stormed the Paris offices of Charlie Hebdo and killed 12 people, six of whom were cartoonists. Charlie Hebdo, a French satirical magazine, had previously published cartoons depicting Muhammad. Al-Qaeda claimed responsibility for the attack, writing that the group’s central leadership had selected a “particular target - in this case, caricature artists defaming the religion and Prophet Muhammad.” Al-Qaeda claimed that the attacks had “[forced] the magazine to halt distribution of offensive drawings of the Prophets.” Soon after the attacks, Charlie Hebdo’s editor said that the newspaper would stop publishing cartoons of Muhammad, saying, “We’ve done our job. We have defended the right to caricature.” (Sources: BBC News, Inspire, p. 40, Inspire, p. 53, Washington Post, Deutsche Welle) 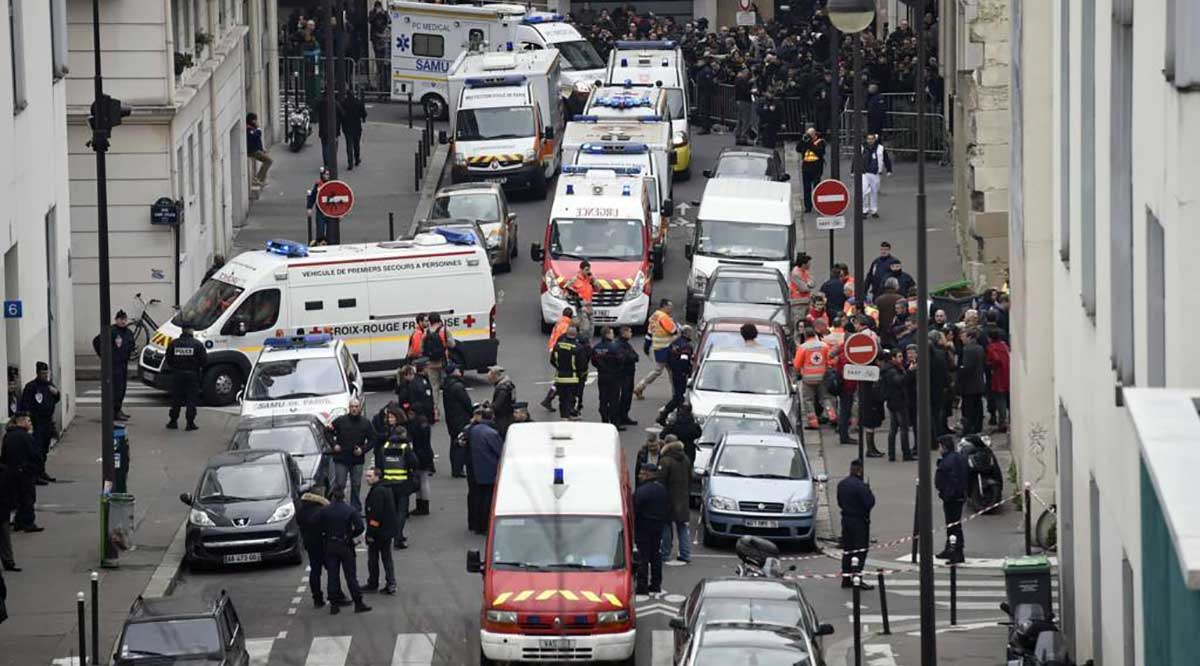 Emergency vehicles outside of the Paris offices of Charlie Hebdo
(Source: BBC)

In its spring 2016 issue of Inspire, al-Qaeda wrote that the Charlie Hebdo offices were targeted in order to send a message to the “publishing company itself, because it was a platform for the insults, the caricature cartoonists and their offensive policies.” According to al-Qaeda, Charlie Hebdo staff were “among the worst offenders of the prophet and Islam in our time.” (Sources: Inspire, p. 69, Inspire, p. 4)