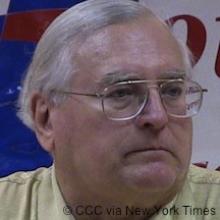 “Some day, You [sic] sanctimonious n[****]r-lovers will either have to live amongst them or else defend yourselves against them. My guess is that you are such a cowardly and pusillanimous lot of girly-boys, they will kill fuck, kill and eat you just as they do young White males in every prison system in the U.S.”Keegan Hankes, “Future of the Council of Conservative Citizens Unknown After Founder’s Passing,” Southern Poverty Law Center, March 9, 2015, http://www.splcenter.org/blog/2015/03/09/future-of-the-council-of-conservative-citizens-unknown-after-founders-passing/.

“God is the author of racism. God is the One who divided mankind into different types. ... Mixing the races is rebelliousness against God.”“Council of Conservative Citizens,” Southern Poverty Law Center, accessed July 8, 2015, http://www.splcenter.org/get-informed/intelligence-files/groups/council-of-conservative-citizens.

“The Nordics and the Nordic race are in imminent danger. Through the use of their power positions and their influence, traitors, big finance and enemy media have for many years made sure that the gates to the Nordics are wide open, thus enabling the ongoing, racially alien invasion of our lands.”Øyvind Strømmen, “New report: Neo-Nazis in the North,” Hate Speech International, March 24, 2017, https://www.hate-speech.org/new-report-neo-nazis-in-the-north/. 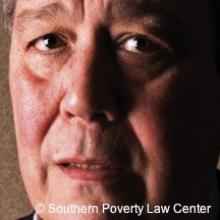 “And I will stand by the contention that the most discriminated group in this country are the poor white working males. I will not back down from that, but I don’t think Congress ought to condemn us.”“Gordon Baum,” Southern Poverty Law Center, accessed July 8, 2015, http://www.splcenter.org/get-informed/intelligence-files/profiles/gordon-baum.

Asked if black people are intellectually inferior to white people: “My personal belief is that the overwhelming, almost unanimous belief of the professionals, the academia, if you will, in the field, say that is the case -- that there's a difference between black and white intelligence. My personal inclination is to believe that ‘The Bell Curve’ is not too far off the mark. You will have a hard time finding somebody in the field -- I'm a lawyer, I'm not a scientist or an applied psychologist or psychiatrist -- but you would have a difficult time finding anybody in academia who would dispute that. Try it.”Bob Herbert, “In America, Mr. Lott’s ‘Big Mistake,’” New York Times, January 7, 1999, http://www.nytimes.com/1999/01/07/opinion/in-america-mr-lott-s-big-mistake.html.

“Why can’t European-Americans be concerned with this genocide [of white people]? Is it racial to say that?”“Gordon Baum,” Southern Poverty Law Center, accessed July 8, 2015, http://www.splcenter.org/get-informed/intelligence-files/profiles/gordon-baum.

“The Pennsylvania Ku Klux Klan recognizes the simple fact that ALL African niggers are all savage, bloodthirsty Satanic beasts... In the last 30 years these cannibalistic apes have fiendishly MURDERED over 50,000 White Christians. A nigger cannot be a Christian. Voodoo is the only appropriate religion for these depraved, demonic, vile, ape-like creatures of jungle darkness.”J. Keith Akins, “The Ku Klux Klan: America’s Forgotten Terrorists,” Law Enforcement Executive Forum 5, no. 7 (2006), http://www.uhv.edu/asa/articles/KKKAmericasForgottenTerrorists.pdf.

“We believe that the United States derives from and is an integral part of European civilization and the European people and that the American people and government should remain European in their composition and character. We therefore oppose the massive immigration of non-European and non-Western peoples into the United States that threatens to transform our nation into a non-European majority in our lifetime. We believe that illegal immigration must be stopped, if necessary by military force and placing troops on our national borders; that illegal aliens must be returned to their own countries; and that legal immigration must be severely restricted or halted through appropriate changes in our laws and policies. We also oppose all efforts to mix the races of mankind, to promote non-white races over the European-American people through so-called ‘affirmative action’ and similar measures, to destroy or denigrate the European-American heritage, including the heritage of the Southern people, and to force the integration of the races.”“Statement of Principles,” Council of Conservative Citizens, accessed July 6, 2015, http://conservative-headlines.com/introduction/statement-of-principles/.

“We oppose ‘gun control’ in all forms and demand that all such legislation and policies be repealed. We also oppose all such legislation as so-called ‘hate crime’ or ‘bias crime’ laws. Such laws merely penalize thought and expression rather than genuinely criminal action and are a dangerous and frightening step toward government Thought Control. Similarly, we oppose all so-called ‘politically correct’ speech codes and ‘sensitivity training’ in schools, colleges, universities, and businesses that punish free expression, restrict thought and study, intimidate dissent, and generally demean and diminish human communications and community.”“Statement of Principles,” Council of Conservative Citizens, accessed July 6, 2015, http://conservative-headlines.com/introduction/statement-of-principles/.

“If we can have a Martin Luther King Day, a Black History Month, why can’t we have the Confederate battle flag fly above the Statehouse?”“South Carolina March Supports Use of Rebel Flag,” New York Times, September 5, 1994, http://www.nytimes.com/1994/09/05/us/south-carolina-march-supports-use-of-rebel-flag.html.