“The continued presence of terrorist propaganda on Facebook by several accounts that support ISIS- and al-Qaeda shows that significant gaps still exist in Facebook’s efforts to remove the worst terrorist content from its platform,” said CEP researcher Joshua Fisher-Birch. “Further, of the videos CEP located, one recycled footage released over three years ago, putting into question their ability to remove re-uploaded content.”

Pro-ISIS accounts included those that spread text versions of Amaq News updates, propaganda photos, short videos from pro-ISIS media groups, and clips from official ISIS videos. An almost three-minute clip taken from an official ISIS video had been on Facebook for approximately 48 hours, and had been viewed over 650 times, and received 160 likes/reacts, 26 comments, and four shares.

Another clip taken from an official ISIS video released in February 2017, included statements from two teenage suicide bombers and footage of their suicide vehicle-borne improvised explosive device detonating. The video was online for approximately three days when it was located, and had over 1,000 views 254 likes/reacts, 32 comments, and seven shares.

An account that spread al-Qaeda-linked Hurras al-Din propaganda posted a video from the group, which was online for six days when it was located, with over 400 views and 82 likes/reacts. The same account also posted a video clip featuring al-Qaeda leader Ayman al-Zawahiri, which had been online for five days when it was located, and had over 350 views, and over 100 likes/reacts. 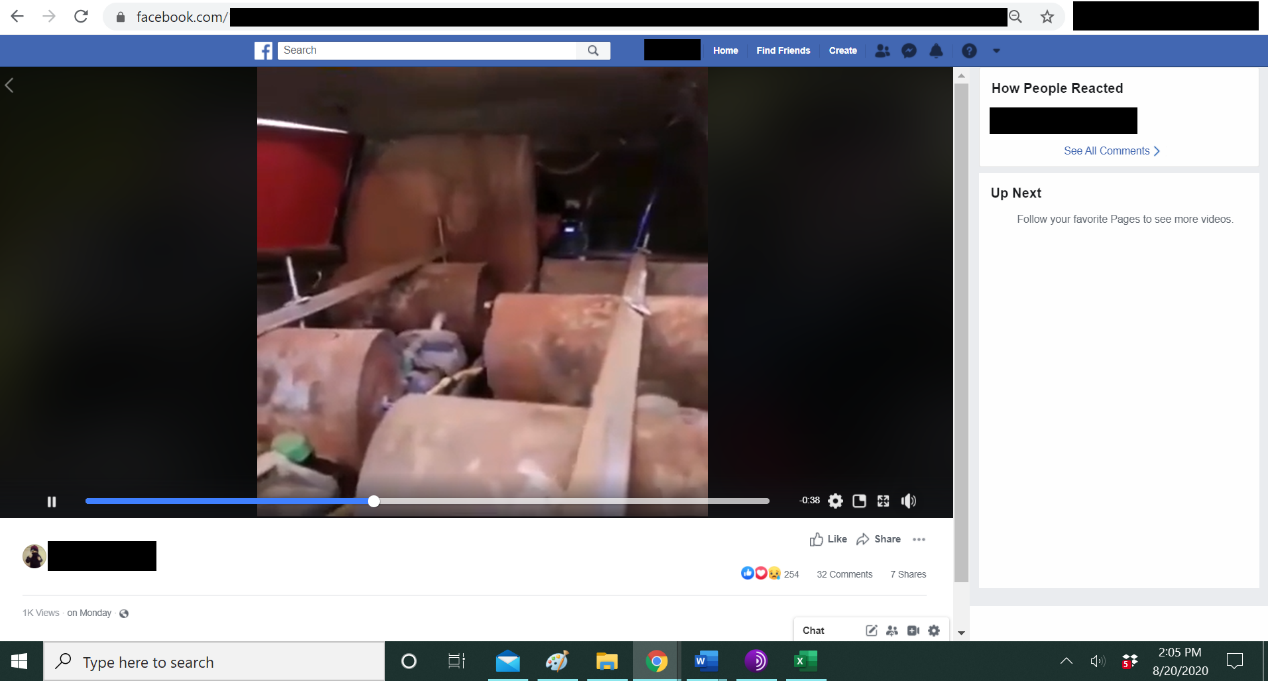 A notorious neo-Nazi accelerationist channel encouraged its subscribers to commit acts of sexual violence, including rape. The channel described sexual violence as a weapon against opponents and urged individuals to commit these acts as a way to gain power. A now-defunct web forum, Fascist Forge, that had a similar worldview to the Telegram channel had advocated for a campaign of mass sexual violence. The channel also posted the jailhouse address for the El Paso attacker, Patrick Crusius, and encouraged followers to write to him and send him money.

The channel had over 2,200 subscribers on August 20 and is one of the most notorious neo-Nazi propaganda outlets on Telegram. The channel routinely calls for acts of violence and terrorism against the U.S. government, Jews, people of color, the LGBT community, activists, and others. The channel has posted material praising groups such as the Atomwaffen Division, The Base, the Sonnenkrieg Division, and the neo-Nazi satanic occult group, the Order of Nine Angles. The channel was removed from Telegram on June 24 but later returned using a different name.

Users of an 8chan successor imageboard made several posts encouraging violence against Black Lives Matter and anti-fascist activists. Users requested content showing violent acts committed against African Americans, and sought to motivate other users to commit violent crimes. Users of the same board have frequently called for and encouraged violence, and have praised the Christchurch terror attack, among other mass shootings.

EHF was created in 2016 to provide cybersecurity and web technical assistance to ISIS supporters. The group currently operates several points of communication and releases a semi-regular tech bulletin.

A U.S. based neo-Nazi network that seeks to establish autonomous allied group chapters around the U.S. and Europe posted a recruitment video on Twitter on August 15. The network hub claims that each regional chapter acts on its own “legal or otherwise,” and that the purpose is to establish worldwide club affiliates. The network, which started as a white supremacist fight club in New England, claims to have allied groups in Tennessee, the Midwest, and the Southwest, in addition to Germany and France. The Twitter page was created in May 2020. The Southwest chapter posted an image on August 16 of seven men posing with rifles, the group’s flag, and a flag for the Rise Above Movement (RAM).

On August 19, the FBI records vault Twitter account posted the FOIA file for the fraudulent anti-Semitic “Protocols of the Learned Elders of Zion,” along with government documents related to the report’s government circulation. Included were pdfs from government sources stating that the text was a fraud, however, the entire file was posted without context and was widely circulated. The “Protocols of the Learned Elders of Zion” is a fraudulent anti-Semitic conspiracy theory dating from early 20th century Russia that purports to expose a Jewish cabal seeking to control the world. White supremacists and anti-Semites on Telegram and Twitter celebrated the posting and the reaction to it online and used the occasion to post and spread the anti-Semitic document.