Almost three years after the Christchurch terrorist attack, CEP researchers were still able to locate the attack video and propaganda glorifying the attacker, including on Instagram and TikTok. On YouTube, white supremacists live-streamed a podcast that contained an interview with the co-founder of the Rise Above Moment Rob Rundo. Separately on YouTube, CEP researchers found a neo-Nazi electronic musician account. There was also a neo-Nazi music label operating on the Google-owned Blogger platform. CEP researchers also found two propaganda videos produced by the Atomwaffen Division on Instagram.

Finally, the Swedish chapter of the Nordic Resistance Movement (NRM) announced in a blog post that they do not support either Russia or Ukraine in the ongoing conflict and urged their supporters not to participate as foreign fighters.

ISIS supporters on RocketChat, Telegram, Element, and Hoop, offered their pledge of allegiance to Abu Hasan al-Hashimi al-Qurashi shortly after the proclamation on March 10.

Shortly after the audio release, online pro-ISIS supporters on Element stated that the priority was to spread the al-Furqan announcement and other propaganda and not allow others to “rejoice at the killing” of ISIS’s previous leader and spokesperson.

On March 11, ISIS released propaganda photos of fighters in Syria, Somalia, Nigeria, and northern Iraq pledging their allegiance to the group’s new leader.

In addition to Telegram, RocketChat, Hoop, and Element, the ISIS audio announcement was released on at least 21 websites on March 10, and a video with a static background was released on ten websites. Within 24 hours, the audio file was only available on four websites: the Internet Archive, Top4top, Mail.Ru, and the IPFS distributed web protocol. In approximately 24 hours, the static video was available on three websites: Facebook, the Internet Archive, and the IPFS distributed web protocol. CEP reported the content to the Internet Archive who made the content only available to logged in users. CEP also reported the video to Facebook, who removed it.

On March 9, the second issue of the pro-ISIS web magazine “Voice of Khurasan” was released online. The main article stated the Taliban are hypocrites and sought to portray them as lackeys of the U.S. The author claimed that because the Taliban did not take over Afghanistan by force and negotiated with the U.S., that they had been forced to accept democratic principles and had not established a true Islamic governing or legal system. The magazine also contained a profile of an Indian ISIS-K fighter killed in Afghanistan, who was shown as an example of selflessness and piety. Other articles stated that ISIS was following the right path, that other extremist groups, especially al-Qaeda and Hayat Tahrir al-Sham, had allied with nationalist groups and embraced religious hypocrisy, and that a caliphate was the only legitimate form of government.

The Christchurch terrorist attack video and propaganda glorifying the attacker can still be found online, including on two major platforms, almost three years after the horrific events of March 15, 2019. The week of March 6 to March 12, CEP researchers located an 18-second video on Meta-owned Instagram that contained violent footage from the attacker’s video. The clip was uploaded on February 28, 2022, and had 122 views and 33 likes when it was found. CEP also found two photos on Instagram that included images taken from the attack video, uploaded on February 6, 2022, and November 14, 2021, with seven likes and 132 likes, respectively.

CEP also located a video on TikTok that included footage taken from the attack video, which had been on the platform for over a month when it was discovered. Two other videos on TikTok were found that contained drawings glorifying the attacker. The attack video and a video with modified violent clips from the video were also located on the blockchain-based Odysee video streaming platform. CEP also found two different audio versions of the attacker’s manifesto on Odysee and a video where the narrator spoke in support of the Christchurch terrorist. Odysee’s Terms of Service prohibit users from posting content that “promote(s) any illegal activity.”

CEP located a white supremacist podcast on YouTube live-streamed on the platform on March 6. The podcast consisted of an interview with Rob Rundo, the co-founder of the Rise Above Movement, who spoke of the need to form a white supremacist counter-culture movement, stating, “Our enemies are legit parasites and I will say I will use every single means at my disposal, everything I can to help awaken our people.” On the podcast, Rundo offered recruitment tips and advertised his active club movement and media brand, which has previously had videos removed from YouTube for violating the streaming site’s policies prohibiting hate speech.

CEP researchers located the account for a known neo-Nazi electronic musician on YouTube. At least one video out of 25 total had ads enabled, which played before the video. The account had over 66,000 views and almost 650 subscribers on March 10 and was created on July 27, 2017. Videos posted by the profile had links to a neo-Nazi website, and song titles referenced violent accelerationism and white supremacist themes. Links on the YouTube page directed users towards an online location to make donations to the legal defense of an Austrian neo-Nazi musician facing a prison term.

CEP researchers located two Atomwaffen Division propaganda videos and a compilation video containing footage from AWD and The Base on Instagram. The two AWD videos were uploaded on March 4 and February 28 and had 199 and 176 views on March 10, respectively. The compilation video, uploaded on February 21, had 63 views. CEP also located an Instagram user that used an AWD propaganda image as a profile photo. An account was also found that contained a link in the profile for a neo-Nazi website that supports the work of James Mason and supports the National Socialist Order. Other accounts located on Instagram included using the 2011 Norway terrorist as a profile photo and posting antisemitic memes. After reporting the content, Instagram removed the compilation video and one of the AWD videos, however Instagram did not remove the second AWD video. 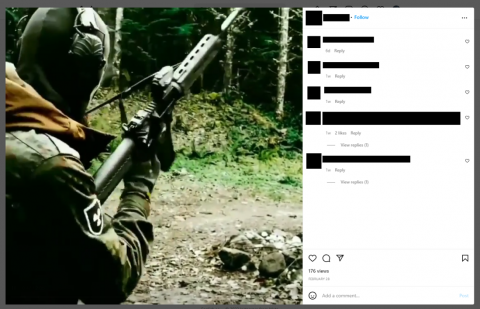 On March 6, the Nordic Resistance Movement (NRM) declared in a blog post by the leader of their Swedish chapter that they do not support Russia or Ukraine in the current conflict. The blog post stated that it might seem logical to sympathize with Ukraine but that the NRM could never be on the same side as the U.S. or Israel and that it was essential to challenge the West, especially the U.S. The post stated that the group also does not support Vladimir Putin, who the post stated has persecuted neo-Nazis in Russia and leads a multiethnic state. A second NRM blogpost on March 10 attempted to dissuade the group’s supporters and others from traveling to Ukraine in order to fight, stating that they should remain “neutral” and focus on issues in their country of origin. NRM has previously had a relationship with the Russian Imperial Movement.

It’s been nearly a year since the Taliban returned to power in Afghanistan. During this time, the militants have in… https://t.co/EkavMZmvUa

“…Facebook continues to serve ads against searches for white-supremacist content, such as the phrases Ku Klux Klan… https://t.co/jCVfnsC7ak